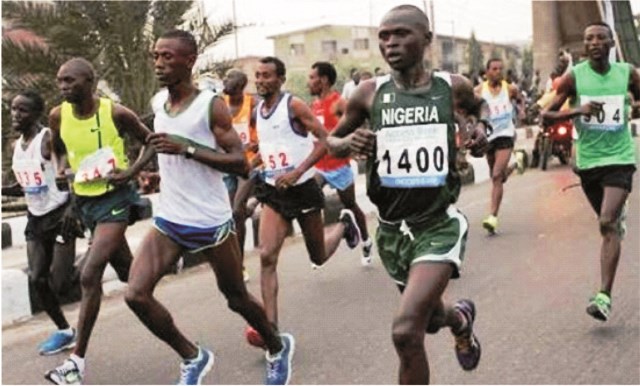 The organisers of Nigeria’s biggest Marathon, Access Bank Lagos City Marathon, Nilayo Sports Management Ltd, (NSML), yesterday said that other cities such as Abuja, Asaba and other states would soon host marathon races.
The Chief Executive Officer (CEO) of NSML, Bukola Olopade, made the disclosure in an interview with newsmen on the sidelines of the NSML management’s visit to the traditional ruler of Remoland, King Adewale Ajayi, a.k.a “Akarigbo Remoland”.
The NSML management visited the paramount ruler of Remoland as part of the activities to mark the “Remo Ultra-Marathon” where athletes from 35 countries were being expected.
Tidesports source gathered that Nilayo Sports Management Ltd is the organisers of the Value Jet IAU African Championships 2019 scheduled to hold in Sagamu and adjourning cities on December 7.
The sports management company was also behind the just-concluded Jac Motors 10km Abeokuta Marathon won by 21-year-old Kenyan athlete, Biwott Kemboi.
Olopade said that other states in Nigeria were craving to have their respective long distance races taking a cue from the successful hosting of Lagos Marathon and Abeokuta.
“We are on the verge of announcing a major breakthrough for the Abuja Marathon, we have secured three sponsorships; we have just secured the headline sponsor.
“We believe that there should be more road races in Nigeria but the fact is that we cannot do it alone, we are challenging other stakeholders to come on board as well.
“Road race is healthy and makes people keep fit for a better life, our vision is to see more states in Nigeria join the marathon race. Cities like Ile-Ife, Onitsha Enugu and other cities.
“I was disappointed when the Onitsha Marathon failed to hold, but I have been approached by the state government to organise the race and we are looking forward to it.
Olopade said that plans were in the pipeline to have marathon in other cities such as Asaba, adding that the race would soon be a culture in Nigeria.
“We have concluded plans to have a 21km marathon in Asaba through the leadership of the Sports Commission, led by Tony Okowa. For us, this is a big development.
“What we envisage is that road races cannot but continue to grow in Nigeria, but no matter how many races we want to have, it won’t be successful without the support of the private sector.
“I just got confirmation that Sifax company will be joining the sponsorship train for the Sagamu race, we also have Keystone Bank, Seven Up Bottling Company and the lead sponsor, Value Jet.
“In terms of size, Remo race is bigger, but we also have 5km race for the indigenes and also the school children who will be part of the race,” he said.