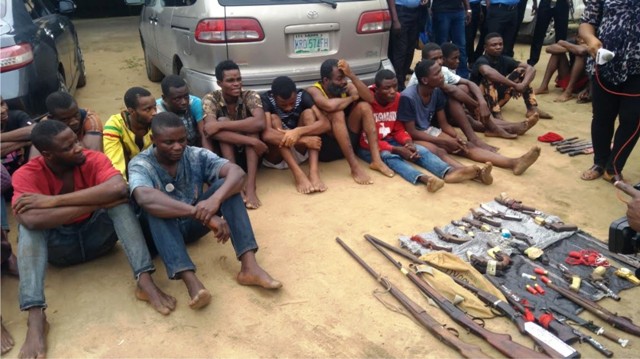 The Oyo State Police Command, yesterday, confirmed the killing of a driver attached to the Commissioner of Lands, Housing and Survey in the state, Mr. Abdulraheem Abiodun.
The police spokesman, Mr. Gbenga Fedeyi told newsmen that the fleeing assailants who attacked the commissioner at Academy area of Ibadan, the state capital also shot the police orderly attached to the commissioner.
Fadeyi said, “The incident occurred around 8.30 p.m. on Wednesday and the police commissioner has directed that the fleeing armed men be apprehended.
“They killed the driver and also shot the police orderly attached to the Commissioner for Lands. They will be tracked and arrested to face prosecution,” Fadeyi added.
A government source said, “The sad development would be thoroughly investigated especially coming 24hours after Governor Seyi Makinde launched 100 vehicles to aid security patrol in the state.”
An eyewitness also confided to our correspondent that the commissioner with a team of sympathisers rushed the deceased to the Accident and Emergency Unit of the University College Hospital, last Wednesday night.
“I saw the commissioner making calls to the governor, on what happened to him and his aides. The governor ordered the security adviser to immediately proceed to the UCH because it was not quite long after the call, that he (adviser) arrived.
“The motive behind this attack could not be ascertained as these armed men after attacking the convoy reportedly took away the gun belonging to the wounded police officer,” he added.
Similarly, some gunmen suspected to be kidnappers have abducted six persons, including a nursing mother with her three-week-old baby at Hayin Danmani Community in Igabi Local Government Area of Kaduna State.
It was gathered that the incident took place last Tuesday night but community residents got to know about it last Wednesday.
Our correspondent also gathered that the kidnappers may have returned to the community on Wednesday night.
A source said, “We heard gunshots Wednesday night and it is possible that they (kidnappers) revisited.”
Meanwhile, it was also gathered that the kidnappers contacted the family of one of the victims and demanded a ransom of N10million.
A source, who spoke on the condition of anonymity, told our correspondent that when the gunmen invaded the community, they shot indiscriminately and went from house-to-house to pick their victims.
One of the community leaders said the residents of the community were not living in fear.
He said while the kidnappers picked the nursing mother and her three-week-old baby, her husband managed to escape.
He added that the kidnappers made away with six other people, who were mostly peasants.
He said, “The incident actually took place on Tuesday night but the community discovered the abduction Wednesday morning.
“We learnt that they made away with a nursing mother and her three-week-old baby.
“You know that Mahuta, Mando, Rigasa, Danmani communities share common boundaries with Dogon Daji which lead to Birnin Gwari, where a military operation is ongoing. It is possible that the military operation is becoming unbearable for the bandits. So, they are being pushed into the communities mentioned.”
As of the time of filing this report, the state command of the police had yet to confirm the incident as the spokesman of the command, DSP Yakubu Sabo, didn’t respond to our correspondent’s telephone call.