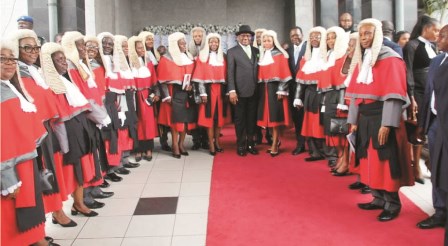 About 32,791 cases instituted in 2018 are said to be pending in various courts in Rivers State.
The state Chief Judge, Justice Adanma Inyie Iyayi-Lamikanra disclosed this while speaking at the special court session held at the state Judiciary auditorium to herald the opening of the 2019/2020 legal year in Port Harcourt, last Friday.
The state chief judge while giving the breakdown of the cases said, the 32,791 cases pending were among the 46,618 cases received from the October 31, 2018 to November 8, 2019, adding that a total of 13,827 cases were filed, while 10,562 cases were disposed.
Iyayi-Lamikanra added that a total of 44,457 cases were brought forward from the 2018/2019 legal year within the period under review.
She also disclosed that out of the number, the magistrate courts received the highest with 38,460 cases, high courts got 13,483, Customary Court of Appeal 1,233, customary courts 3,011, juvenile 1,233, and sanitation court got 1,680 while revenue court has the lowest recorded cases of 70 within the period under review.
Iyayi-Lamikanra also revealed that the state Judiciary generated a total sum of N379,838,535,75 from all the courts, including the customary courts within the period under review, adding that the figure represents 47 per cent increase from last year which, she said, was remarkable.
She described the legal year’s special court session as an annual ritual in the legal profession that provides for critique and stock-staking of the activities of the preceding year, with a view to improving on the administration of justice across the state by key players and critical actors in the legal profession.
“This annual ritual provides for stock-taking and examinations for the last legal year for the administration of justice in the state.
“We have set up Judiciary Information Technology Committee policy in compliance with the directive by the National Judicial Commission (NJC),” she stated.
She used the opportunity to thank the state Governor, Chief Nyesom Wike for the financial support given to the state Judiciary as well as provision of vehicles to both judges and magistrates in the state.
Also speaking, the state Attorney General and Commissioner for Justice, Dr Adangor urged judges and magistrates to dispense justice without favour and fear, adding that both the rich and the poor deserve equal justice, even as he commended the state chief executive for approving and releasing funds to clear the arrears of allowances owed lawyers at the state Ministry of Justice since 2008.
In his contribution, a Senior Advocate of Nigeria (SAN), O.C.J. Okocha, who spoke for members of senior bar in the state, called for total independence of the Judicial arm of government, and recommended that each state should be allowed to determine the number of judges to be appointed.