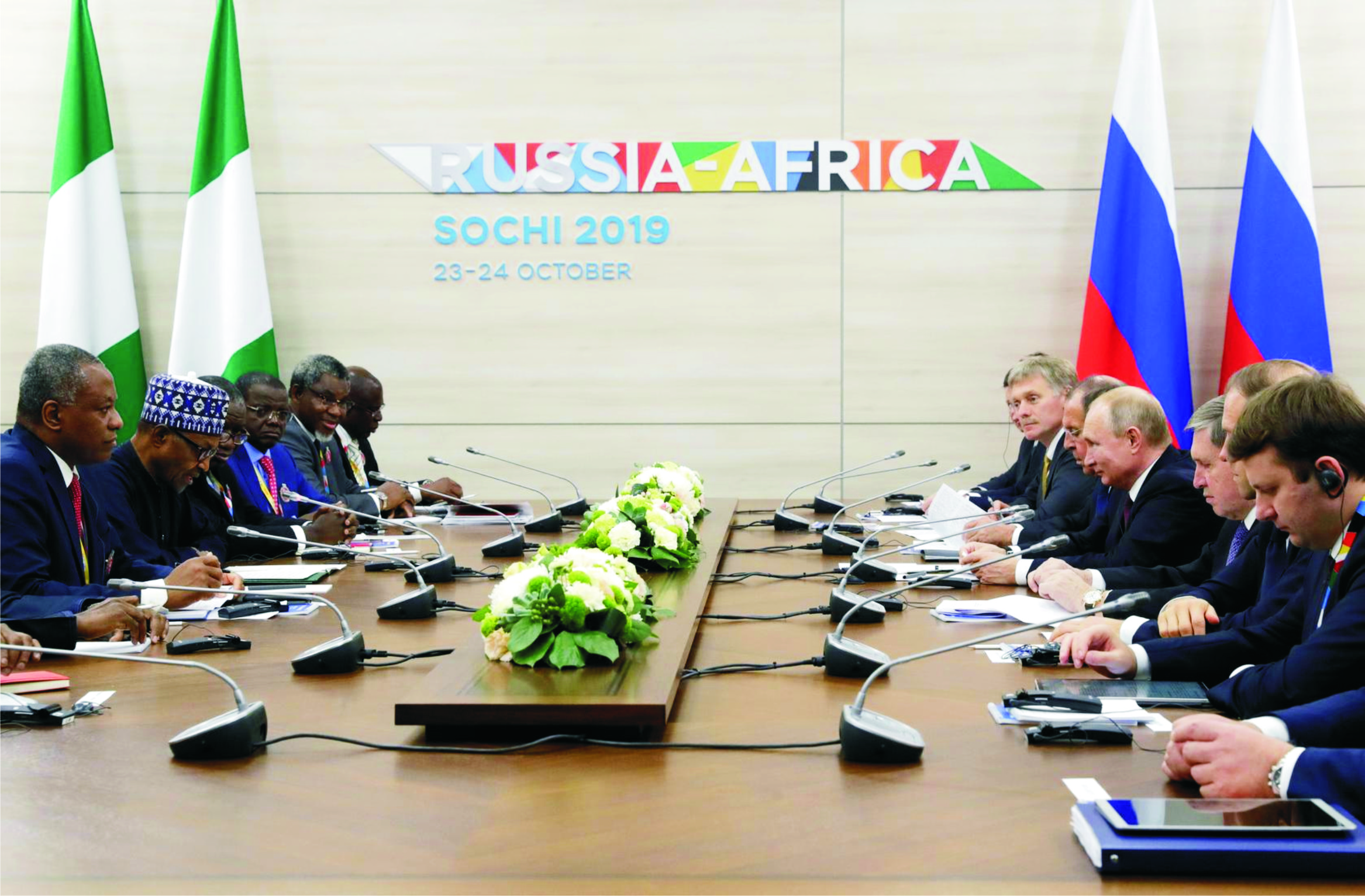 The Russian Government has agreed to support the development of Nigeria’s rail infrastructure by constructing 1,400 kilometres track from Lagos to the South-South city of Calabar.
According to a statement in Abuja, yesterday, the Senior Special Assistant to the President on Media and Publicity, Malam Garba Shehu, said this development was one of the agreements reached at a meeting between President Muhammadu Buhari and the Russian President, Vladimir Putin.
The bilateral meeting was held on the sidelines of ongoing Russia-Africa Summit, in Sochi, Russia, last Wednesday.
Shehu disclosed that there was also discussion on the advancement of an ongoing project for the establishment of a nuclear power plant in Nigeria.
According to Putin, the next step in the implementation of the project should be the commencement of construction of a power plant.
On security and military cooperation, one that existed for 59 years of Nigeria’s independence, Buhari agreed to renew Nigeria-Russia Military Technical Agreement that had lapsed within a short time.
The president said: “I have directed the Minister of Defence to work with the Ministry of Justice to conclude this matter within the shortest possible time.
“This military cooperation agreement is expected to give impetus to direct procurement of military hardware on a government-to-government basis at a lower cost as well as training of military personnel and modernisation of armed forces and renewal of infrastructure and equipment, which President Putin promised to undertake.’’
On the protracted issue of the Aluminium Smelter Company of Nigeria (ALSCON), Ikot-Abasi, Akwa-Ibom State, Buhari said that he had asked the Ministry of Justice, “to submit a comprehensive report on the UC Russel (the Russian owners of the plant) matter.
“I want to assure you that the aim of our reforms is to ensure such investments are concluded and actualised in a professional and painless manner.”
The presidential aide disclosed that the two presidents also addressed partnership in education and agriculture, adding that the Russia leader said they would give additional scholarships to Nigerians.
“We seek your government’s support, especially in the areas of wheat production.
“Today, Nigeria produces less than one hundred thousand metric tons of wheat locally while our imports are projected to exceed five million tons in 2020.
“We, therefore, need your support to bridge the deficit which will create jobs and save our foreign exchange for other important areas like security, defence and infrastructure,” Buhari said.
On this, Putin promised to promote joint efforts, given his country’s ranking as the current number one wheat producer in the world.
“We can do a lot together,” Putin added.
The Russian President said Nigeria should take advantage of Russia’s potassium resources to advance President Buhari’s local fertiliser production programme.
Putin promised his country’s support for the geological prospection of Nigeria’s solid minerals and gave assurances of working with Nigeria and other African countries to secure and stop the incidents of piracy in the Gulf of Guinea as they did in securing the Somali coastal areas.
The Russian leader expressed further determination to secure Nigeria and the rest of Africa from terrorists.
He told Nigerian leader that 2,000 ex-ISIS terrorists joined Boko Haram last year.
Buhari concluded that “to move forward, may I suggest that our countries organise the fifth Joint Commission meeting to review and ratify all the agreements (about 40) contained in the Intergovernmental Nigeria-Russia Joint Commission on Economic, Scientific and Technical Cooperation Protocol of November 11, 2016.”
According to Shehu, Putin agreed to the proposal.
Shehu said both leaders emphasized the need for reform of the United Nations Security Council (UNSC).
Buhari asked Russia to support Nigeria’s aspiration for a permanent member of the council.