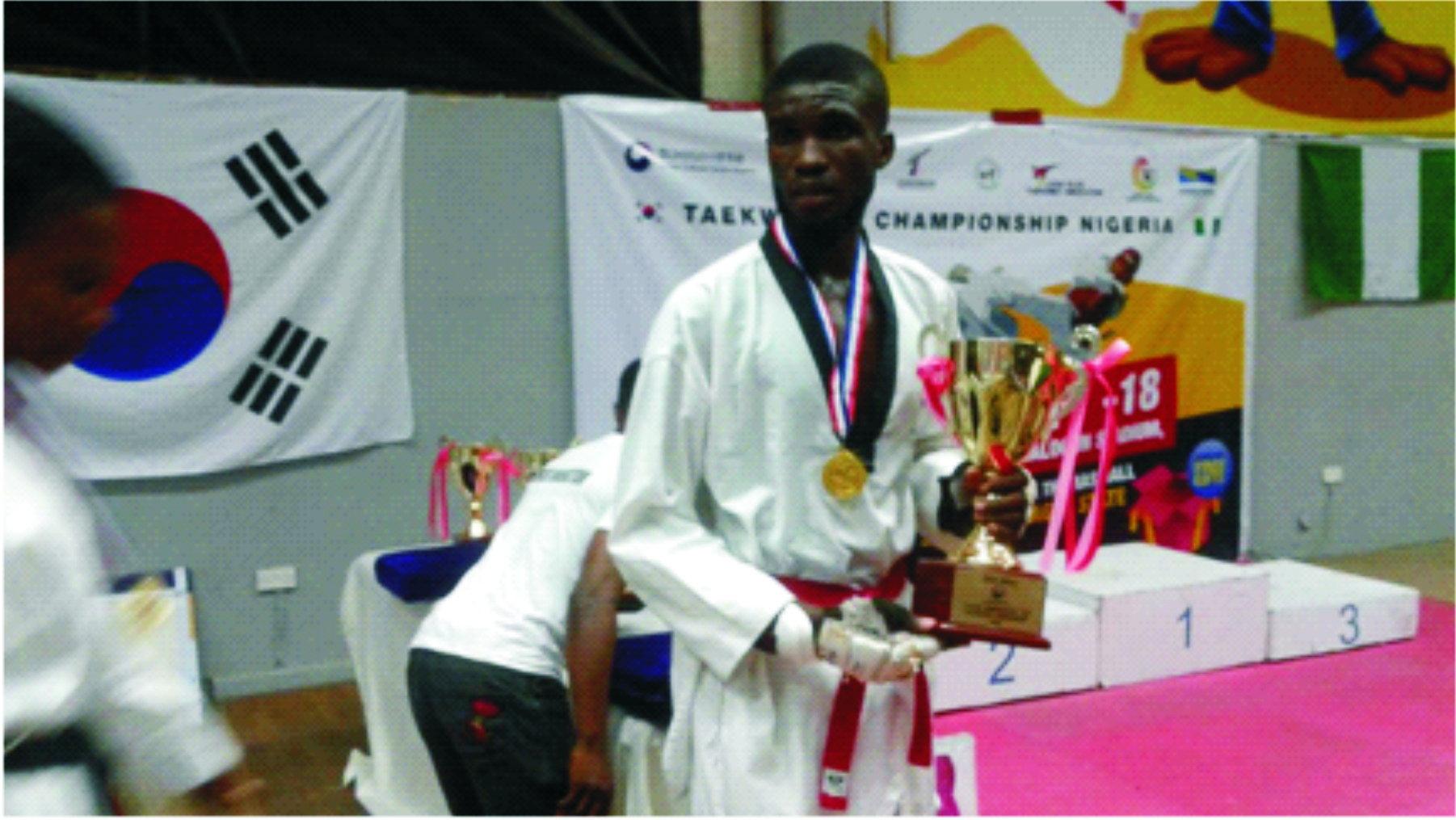 Winner of the male category of the 10th Korean Ambassador’s Cup, Stanley Ogbonnaya.
An aspiring Taekwondoist, Stanley Ogbonaya, who emerged champion in the -80kg of the male category of the 10th Korean Ambassador’s Taekwondo Cup concluded on Friday, says he has his eyes set on becoming a five-time Olympian.
Ogbonaya in an interview with newsmen on the heels of his victory in winning gold at the competition, said he was aiming at becoming a five-time Olympian to surpass Uche Chukwumerije’s record.
Tidesports source reports that the 10th Korean Ambassadors Cup was held at the Molade Okoya Thomas Hall, Teslim Balogun Stadium between Oct. 17 and 18.
The lanky athlete, Ogbonaya, said that though the three-time Nigeria’s greatest export to the Olympic, Chuka Chukwumerije, an Olympic silver medalist was his mentor, he was aiming at surpassing his records.
“I am following the footsteps of one of the greatest Taekwondoists in Africa, Chukwumerije. I am putting in everything he has been teaching me into play.
“Chukwumerije is a good mentor and I will always look up to him because it is not about Taekwondo alone, but the principles associated with it.
“There are principles in and out of Taekwondo which we must imbibed. As the Olympics is drawing near, I am hoping to maintain my quality for the Games and win the medal for Nigeria.
“I hope to surpass the record of Chukwumerije who has appeared three times in the Olympics to attend at least five times to set a new record. I want to be five times Olympian,” Stanley Ogbonnaya said.
Ogbonaya rated the competition as one of the best in Nigeria, adding that lessons from the just-concluded championships had helped him in knowing his strength and weaknesses.
“This is one of the tournaments we are always looking forward to because we don’t have the luxury of many championships.
“My first experience in the championships can be regarded to as a disaster because I got knocked out without winning a fight, but I was able to win silver at the second try.
“I had to intensify training so that I can win gold medal this year and it eventually paid off. I will like to thank the Korean Embassy for organising the championships.
“This tournament has helped to improve us mentally so that whenever we are going for foreign tour for qualifiers, we will be fit enough to win,” he said.