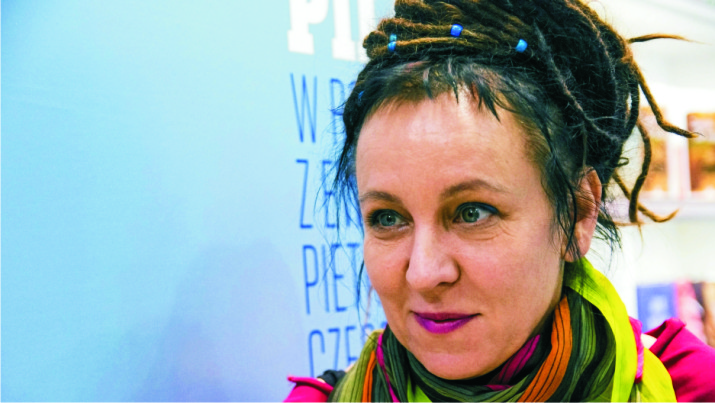 As the Swedish Academy finally announced laureates for 2018 and 2019, after scandal forced last year’s award to be postponed, Olga Tokarczuk has been declared the winner of the 2018 Nobel Prize in Literature.
Born 29 January 1962 in Sulechów, Poland, Olga Tokarczuk, a Polish writer, activist, and public intellectual , was barely six years old, and living in the small town of Sulechów, when the Polish students protests of 1968 erupted. Her father’s family were refugees from a part of Poland that is now in Ukraine. Both parents were teachers who “lived in an island of leftwing intellectuals, but not communists”.
Although trained as a psychologist at the University of Warsaw, Olga, upon graduation took a hospital job as a specialist in addiction, married a fellow psychologist and gave birth to a son. But after five years, she decided she was too fragile to continue at the hospital. “I was working with one of my patients and realised I was much more disturbed than he was.”
She left her job and published a collection of poetry, quickly followed by a novel; The Journey of the People of the Book – a parable set in 17th-century France – which won a prize for best debut. Though the books, and the prizes, kept rolling in, in her mid 30s, Tokarczuk hit a crisis and decided she needed to take some time out to travel. She became particularly noted for the mythical tone of her writing as she has published several novels, as well as other books with shorter prose works.
Today, OlgaTokarczuk has been described as one of the most critically acclaimed and commercially successful authors of her generation.With her declaration as the winner of the 2018 Nobel prize coupled with the 2018 winner of the Man Booker International Prize for her novel; Flights, she becomes the first Polish writer to do so.
A mother, and wife to Roman Fingas, when she was hotly tipped to win the Man Booker International prize last year, Olga Tokarczuk considered herself “ very naive”as she talked about facing controversy at home and the armed bodyguards hired to protect her.
A literary star in Poland, Olga’s sixth novel; Flights, could best be described by any one as her stepping stone to greatness. Not as though Olga had not featured any work translated in English language, Flights highlighted her as probably one of the greatest living writers any scholar would love to meet.
Adam Mars-Jones, once wrote a highly complimentary review of Flights in the London Review of Books. “It could almost be an inventory of the ways narrative can serve a writer short of, and beyond, telling a story,” he said. “The book’s prose is a lucid medium in which narrative crystals grow to an ideal size, independent structures not disturbing the balance of the whole.”
Tokarczuk prefers an astronomical metaphor, explaining that, just as the ancients looked at stars in the sky and found ways to group them and then to relate them to the shapes of creatures or figures, so what she calls her “constellation novels” throw stories, essays and sketches into orbit, allowing the reader’s imagination to form them into meaningful shapes.
She is currently best known in Poland for a 900-page historical epic called The Books of Jacob published in 2014. The Books of Jacob tells the story of Jakub Frank, a Jewish-born religious leader who led the forcible conversion of fellow Jews to Catholicism in the 18th century. The novel itself was well received, selling 170,000 copies in hardback and winning her a second Nike award, known as “the Polish Booker”.
In her naivety, thinking she would be able to discuss the dark areas in Poland’s history, Tokarczuk was branded a ‘targowiczanin’, an ancient term for traitor when she outraged rightwing patriots by saying that, contrary to its self-image as a plucky survivor of oppression, Poland itself had committed “horrendous acts” of colonisation at times in its history. A reason for which her publisher had to hire bodyguards for a while to protect her.
She has long been one of Poland’s highest profile writers, a vegetarian feminist in an increasingly reactionary, patriarchal country, and a public intellectual whose every utterance can make news headlines.
Call her an intelligent, brilliant or controversial artiste, Olga Tokarczuk has not only made her mark in the literary world, she has boosted the ego of women as a worthy ambassador of the folk.

NGO To Train Women In Rivers