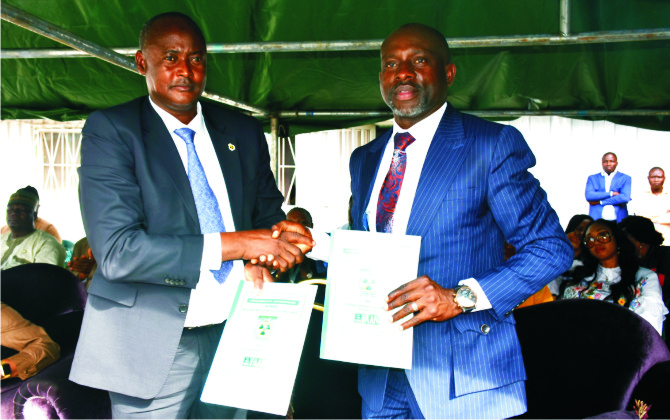 Nigeria Nuclear Regulatory Agency (NNRA), has donated one radiation portal monitor equipment to Federal Airports Authority of Nigeria (FAAN), which was installed at Nnamdi Azikwe International Airport, Abuja.
The Acting Director General, NNRA, Dr Yau Idris, disclosed this in Abuja on Wednesday at the signing of Memorandum of Understanding (MoU) between the two organisations,
He explained that the move was to check the illicit trafficking of radioactive materials.
The MoU is on the sharing of operational responsibilities of radiation portal monitor equipment between NNRA and FAAN.
According to him, NNRA will replicate the installation of radiation portal monitor equipment in all the airports in the country to strengthen security.
“We are installing the radiation portal monitor to check the illicit trafficking of radioactive materials because, Nigeria is one of the highest importers of radioactive materials in Africa,” he said.
Idris said the radiation portal monitor equipment donated by European Union with assistance of International Atomic Energy Agency (IAEA) to Murtala Muhammed International Airport, Lagos was only to monitor materials going out of Nigeria alone.
“Whatever, however, it is coming to us we don’t have anything to check it whether it is coming in or it is going out.
“So, we have been trying our best to make sure that we procure this radiation monitor porter. Now the time has come to donate one to Nnamdi Azikwe International Airport.
“We have started with Nnamdi Azikwe International Airport, Abuja (NAIA), we are going to replicate into all our airports, sea ports, land border ports.
“We are going to stop all the radiation sources in the country and also the radiation sources that are coming into the country, “he said.
FAAN Chief Executive Officer, Capt. Rabiu Yadudu, thanked the NNRA for the act of benevolence.
Yadudu, who was represented by the FAAN Legal Adviser, Dr Clifford Omozeghian promised that FAAN would strictly follow and sustain all agreements of the MoU.
Yadudu said FAAN would keep deepening its objectives of safety and security.