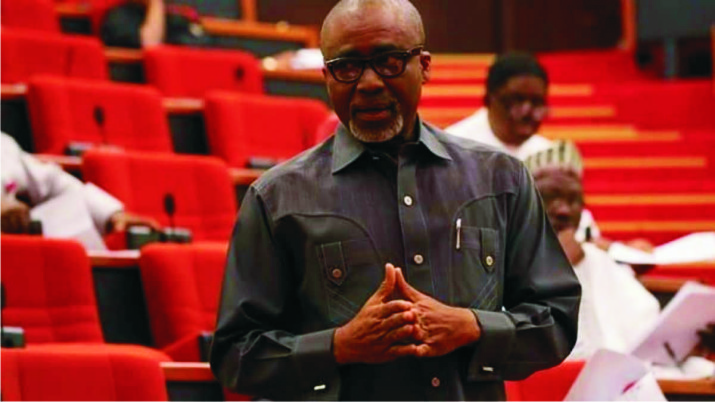 As Senators began the N10.33 trillion budget debate on Wednesday, there were different opinions on the viability of the budget by lawmakers who tried to tag the Appropriation based on their own different perspectives.
Minority Leader of the Senate, Enyinnaya Abaribe while ‘firing’ the budget said that so many things which could not be obviously achieved were put together in the budget.
“Very many things were put and jumbled together: budget of fiscal consolidation, investing in critical infrastructure and so forth.”
“In other words, putting everything together like that reminds us of what Shakespeare said: a tale full of sound and fury signifying nothing.”
This, however, did not go down well with the Senate President, Dr Ahmad Ibrahim Lawan who insisted that he should have concentrated on the contents of the budget rather than taking the chambers through a literature class.
“Minority leader, this is not a literature class and I want to appeal that you talk on what was read in the budget speech.”
Senate later raised concerns about securing loans and other issues, which paved way for the Minority leader to speak on.
Abaribe continued, saying the budget was that of taxation rather than consolidation.
“I want to suggest a name to those who wrote this speech for Mr. President, that this is nothing but a budget of taxation. It is a budget that is based on taxation. It’s based on 7.5 per cent increase in VAT, based on several other increases.
“Senate President, Senate leader, Senator Yahaya Abdullahi has helped us in his lead debate on how the Federal Government intended to secure loans in order to shore up the budget deficit while faulting the development.
“I want to mention that the biggest loan we have is the fact that, how would you talk about job creation when you do not invest in what will create jobs?
“Debt servicing as a component is higher than capital expenditure. 2trn for capital expenditure, 2.4trn for debt servicing.
The projected growth that they put in the budget was 1.9 per cent, less than the population growth of 2.6 per cent. So, if we look at it globally, we are still struggling.
“We may have to take over and direct the economic policy of this government. having seen that they have not done anything and they have failed.
“Two assumptions are critical for this government. First, the assumption on oil prices. I know that our people were happy when there seem to be a little problem in the middle east with Iran which will lead to a spike in the oil price but that seems to have gone down which means that our projection for the cost of oil may also be off the mark.”
“Second one is our projection for the production levels daily. Last year, the average production level was 1.8m BPD. Why don’t we just keep it there? Why must we go up to 2.1 only to be disappointed at the end of the day?
“I know that you have promised the executive that we are going to work very well with the executive to produce the budget, but I plead with my colleagues to look at the facts. You can’t run away from facts.
“The facts here is that this is not a sustainable budget. If we need to change, we must be able to look at the critical fundamentals of this budget speech and make adjustments as due.”
Senate President insisted that the Minority leader was inaccurate in his statistical presentations.
Similarly, some lawmakers of the opposition Peoples Democratic Party, PDP, maintained that the figure was bogusly put together by the executive without taking the nation’s dwindling revenue into consideration.
Speaking at a press conference after plenary, Spokesman of the Senate, Senator Adedayo Adeyeye said the nation has the best budget put together for 2020.
He said what transpired on the floor was in line with different perspectives of seeing things by people while describing the budget as “budget of consolidation.”