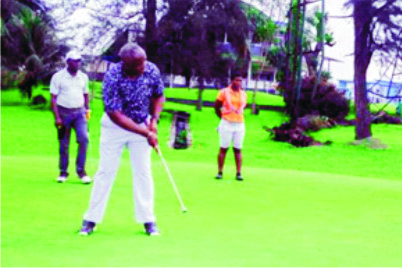 Tournament Director of the African Tour, Edwin Osuhor, at the weekend revealed that golfers from at least seven countries were expected to feature in the 1st October Golf Championship in Port Harcourt.
Tidesports source reports that the championship which is the fourth edition of the African Tour’s annual event is usually staged to mark the Nigerian Independence.
The Nigeria@59 championship is expected to tee off on Saturday and end on October 1 at the Port Harcourt Golf Club.
Osuhor told newsmen in Abuja that players from seven African countries, Ghana, Cameroon, Senegal, Zimbabwe, Zambia, Equatorial Guinea and hosts Nigeria, would battle for honours in this year’s tournament.
He noted that the annual independence tournament had become the best-attended event on the Tour.
“Last year, a record number of spectators enjoyed the fun at the Port Harcourt Club’s Golf Section when Ghana’s Vincent Torgah claimed the title.
“This golf tournament which features some of the game’s top players in the region has gained a reputation over the years as the most raucous event on the African Tour and for good reason.
“The 18th and 9th holes of the host course of this event are home to one of the most enthusiastic crowds on the African Tour,” Osuhor said.
The tournament director explained that there would also be some smaller events organised as part of activities to mark the Independence tournament.
“This year’s tournament is nearly a week long, spanning over two weeks.
“On Thursday and Friday, the pros will play practice rounds to get ready for when each stroke counts.
“There will also be a ‘Beat The Pro Contest’ amongst young players whose ages range from 6 to 18, where any player who beats a pro by having his or her ball closer to the pin than the pros will win a gift voucher worth 100 U. S. dollars.
“The fun really begins on Friday with the qualifying event for new pros seeking a spot in this year’s event. It is a one-day contest featuring pro golfers paired with scratch amateurs.
“The actual tournament officially begins on September 28 where a lot of notable golfers around Africa will be out to make the cut,” he said.
Tidesports also gathered that some of the notable players expected to feature in the tourney include defending champion, Vincent Torgah from Ghana.
There will also be 2016 and 2017 champions, Nigeria’s Andrew Odoh and Kingsley Oparaku, respectively.
Others are Cameroon’s Priestly Nji; the winner of the 2019 Shagamu Cup, Francis Epe; winner of the 2019 South-East Shoot-out, and Emos Koblarh; the number two player in the Order of Merit (O. D. M.).
The rest are Olapade Sunday; number three (O.D.M), Gift Willy; number five (O.D.M) and Mike Ubi; number six (O.D.M).
Tide sports reports that with just four events left before curtains fall on the 2019 Tour season, players will be looking to win.
Winning will help them improve their positions on the Order of Merit as this tournament offers 4,000 merit points.

YSFON In Need Of Sponsorship In Rivers