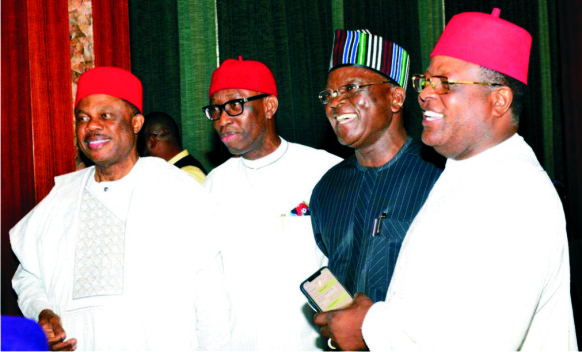 It was all drama as the Chairman of the Board of Trustees (BoTs) of the Peoples Democratic Party (PDP), Senator Walid Jubril and its Secretary, Senator Adolphus Wabara, disagreed over the submission of an investigative report on the minority leadership position in the House of Representatives, yesterday.
Briefing journalists shortly after a marathon meeting of the board at the party’s Abuja secretariat, yesterday, the two elderly chieftains contradicted each other on the status of a report of the committee that investigated the embarrassing sell-out.
At issue was a report of a five-man committee set up by the BoT on July 9, to investigate why PDP members in the House of Representatives elected Hon Ndudi Elumelu of Delta State in the Green Chambers as minority leader, against the party’s choice of Hon Kingsley Chinda of Rivers State.
Miffed by the action, the leadership of the party had suspended Elumelu for one month.
Besides Elumelu, others affected by the suspension order were Lynda Ikpeazu, Wole Oke, Anayo Edwin, Gideon Gwadi, Toby Okechukwu and Adekoya Abdul-Majid.
The BoT investigation committee, chaired by a former Senate President, Dr Iyiorchia Ayu also had two other former Senate Presidents, Chief David Mark and Chief Adolphus Wabara as members.
A former Deputy President of the Senate, Alhaji Ibahim Mantu was also a member while a former Deputy Speaker of the House of Representatives, Hon Austin Opara served as secretary of the committee.
However, Opara resigned from the committee before it concluded its assignment.
During a question-and-answer session at the briefing, the BoT chairman said the board had received the Ayu committee report but had yet to submit same to the National Working Committee (NWC) of the party.
Jubril said: “We have received the report from the Ayu committee but we have not submitted it to the NWC because we are still deliberating on it, and we have not taken a decision on it yet.”
But he was swiftly countered by BoT secretary, who said that the board had, indeed, submitted the report to the NWC.
Wabara said: “We have considered the report and we have submitted the report on Elumelu to the NWC”.
This was followed by muffled disagreement between the two elderly party chieftains with the BoT chair raising objection to the secretary’s statement even as the latter stood his ground.
Their verbal exchange was in hushed tones but was audible enough for journalists to hear their voices.
The disagreement dragged till the end of the media briefing, with the two board members frowning and mumbling at each other as they left the venue and walked through the drizzling rain into their waiting cars.
Curiously, however, while the BoT meeting was still ongoing, the leadership of the party had issued a statement regarding the disputed report.
The statement, signed by the spokesman for the PDP, Kola Ologbondiyan, said the NWC had not received the said report from the BoT.
The statement reads in full: “In the light of public enquiries and conflicting reports on the position of the leadership of our great party on issues related to the minority leadership of the House of Representatives, the National Working Committee (NWC) hereby clarifies that it has not yet received any report from the Board of Trustees (BoTs) concerning the outcome of the five-member committee it set up to intervene on the contentious matter.
“Consequently, the NWC maintains that it has not taken any decision to review its subsisting stance on the minority leadership of the House of Representatives.
“The NWC, therefore, urges critical stakeholders, party members and the general public to completely disregard any report to the contrary”.

The Joint Health Sector Unions (JOHESU) and the Assembly of Healthcare Professional Associations (AHPA), yesterday, announced the suspension of its warning strike but noted that the Federal Government has still not attended to its demands; it disclosed that it will make its next decision in the coming days.
JOHESU, who disclosed this in a press statement signed by its National Chairman, Comrade Biobelemoye Josiah, further disclosed that instead the government has resorted to threats, intimidation and blackmail rather than calling for a resolve of the trade dispute.
The statement read in part: “This is to bring to your notice that the 7-day nationwide warning strike embarked upon by the members of the Joint Health Sector Unions (JOHESU) would come to an end midnight of today, 20” September, 2020.
“By this notice, all health workers under the five unions that make up Joint Health Sector Unions (JOHESU) and Assembly of Healthcare Professional Associations (AHPA) shall return to work on Monday, 21st September, 2020 across all Federal Health Institutions in the country.
“However, since the Federal Government through the Federal Ministry of Health has continued to exhibit high level of bias/discrimination by refusing to address the demands of our members as presented by JOHESU within the seven days of the warning strike as was done to other bodies in the health sector, the next line of action would be decided in due course by the expanded National Executive Council of JOHESU.
“If is pertinent to also inform members of the Press and the general public that rather than call JOHESU for dialogue to resolve the trade dispute, the Federal Government has resorted to intimidation and blackmail of JOHESU leaders using all forms of instruments and faceless organisations.
“JOHESU will continue to use all legitimate means to defend the rights and demands for the welfare of its members in the health sector. Nigerians should bear us witness that JOHESU has shown high patriotism by demanding that public health system in Nigeria is sustained and adequately financed for effective, efficient and affordable healthcare service delivery.”

The Rivers State Chief Executive, Chief Nyesom Wike, says the late Elder Samuel Azuta Mbata left a legacy of faith and passion for the things of God.
Wike stated this during the funeral service in honour of the late elder statesman at Elder Sam Mbata’s Compound in Eneka, Obio/Akpor Local Government Area, last Saturday.
Represented by his Deputy, Dr. Ipalibo Harry Banigo, the governor urged members of his family to build on that legacy and move forward, noting that the Almighty God would comfort them.
“The God of all comfort will comfort you; he will not leave you alone; he will not leave you without comfort. God is with you in a greater dimension than you can ever imagine”. Wike stressed.
The governor, who described him as a trail blazer, said Elder Mbata had done so much in all the leadership roles that he played.
“In the Rivers State Government, he served meritoriously as the chairman of the Governing Council of the Rivers State College of Science and Technology, now Rivers State University.
“He was also the chairman of the Judicial Council. These are very key roles, and he also provided leadership in many other ways”, Wike further stressed.
The governor, who said that the late elder statesman practically brought the Full Gospel Businessmen’s Fellowship International to Nigeria, of which Rivers State was a beneficiary, added that he was a member of the Board of Trustees Internationally.
The state chief executive took a swipe at the Nigeria Police Force for the siege on his hotel in Benin City, the Edo State capital, where he lodged while on official national assignment.
“I call on the President of the Federal Republic of Nigeria, the Inspector General of Police, all the security agencies and INEC to, please, allow the democratic process to carry on in our nation, and allow Edo people vote in a violence-free process”, he emphasised.
In his sermon, the Founder and President of Uma Ukpai Evangelistic Association, Rev. Uma Ukpai, extolled the sterling qualities of the late Elder Sam Mbata, describing him as a man of great purpose.
Ukpai said late Mbata was a reliable man, whom you can count on in times of need, noting that Sam Mbata used his resources to propagate the gospel of our Lord Jesus Christ sacrificially during his life-time.
He, therefore, prayed the Almighty God to empower his children to achieve greater exploits for Christ.

Gunmen wielding dangerous weapons have raided Gobirawan Cali communities in Maru Local Government Area of Zamfara State, and forcefully kidnapped over 50 peasants to an unknown destination.
In an interview with the BBC Hausa service monitored, yesterday, an indigene of the community said the gunmen stormed the village, shooting sporadically.
According to him, “they came in troops, they entered our community, and shot guns repeatedly, chasing people. We were running, scampered for safety. The community is now deserted. We all ran away. We are about 3,500,” he said.
“They took us by surprise. At about 3.30 pm, a gunman came and tried to kidnap one of our men. He was able to wrestle the gunman, slammed him on the ground and seized his AK-47.
“Immediately he picked the gun and threw it inside a maize farm nearby, the gunman regained consciousness and picked race. We never knew his colleagues were waiting in the bushes. They thereafter came into our community in great numbers and shot repeatedly.
“We ran away but they abducted over 40. Some managed to escape. We couldn’t call the security agents because there were no networks.
“Our community is now empty, we are not going back unless the government provides us with security,” he said.