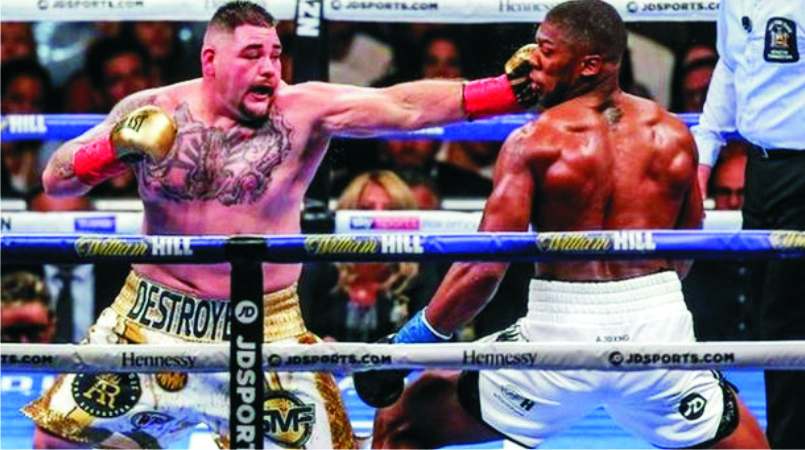 Anthony Joshua has vowed to be more “switched on” at the start of fights, as he prepares to face Andy Ruiz Jr for a second time.
Joshua, 29, lost the IBF, WBO and WBA world heavyweight titles to the Mexican-American in New York in June and the pair fight again on 7 December.
The Briton’s demeanour during his ring walk led to questions after the defeat.
“I need to start taking this approach to my fights where I’m a bit more lively,” said Joshua.
Speaking on Eddie Hearn’s BBC podcast ‘No Passion, No Point’ Joshua said he was consciously trying to stay relaxed before the bout but will no longer suppress his natural energy on fight night.
“I know I’m capable of it,” he added. “There is too much at stake. If I go in there where I’m switched on, a time like the Ruiz fight where I am so relaxed, that might be the difference” he said.
Joshua and Ruiz fight again in Diriyah, Saudi Arabia.
Joshua was knocked down four times before being stopped in the seventh round by Ruiz, who accepted the bout at short notice and was a huge underdog.
It was his first defeat in 23 bouts as a professional and he now says he hopes to revert to the “challenger mindset” he had before becoming a world champion.
Asked how he dealt with his defeat, Joshua said: “I think I had to grieve and ask myself all the questions you would expect.
“People say ‘you lost’; I call it a blip.
“I can’t wait to get in there and fight him. Every time I have fought a champion I have risen to the occasion,” he said.