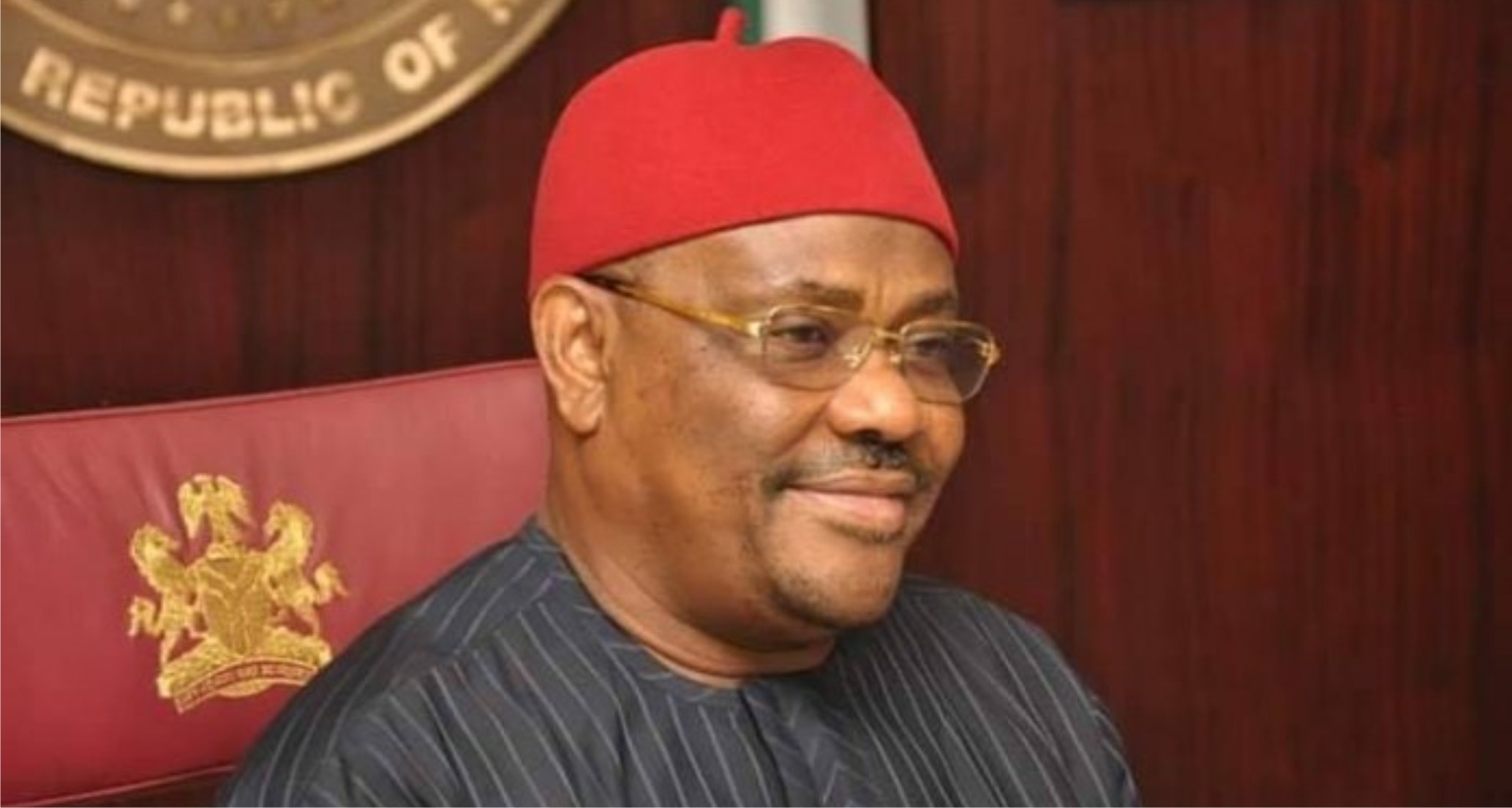 A traditional ruler in Elele in Ikwere Local Government Area of Rivers State, Eze Okey Okah, the Eze Ali Omokprikwu has joined millions of Rivers people in commending Governor Nyesom Wike for his proactive ideas in setting up the Task Force on Street Trading, Illegal Markets and Motor Parks, targeted at sanitising major roads in the state.
Speaking in a telephone interview recently, Okah said having seen the gradual institution of sanity in virtually all the major roads in Port Harcourt, he has no doubt that the governor has initiated people-oriented projects.
For me, the governor is truly God-sent to salvage the state from the wrong doings of past administrators, given the high level of transformation of work he has succeeded in doing in the state since he assumed office as the chief executive of the state.
“Interestingly, Rivers State is beginning to regain its lost glory, not only in terms of cleanness, but also on free flow of traffic on our major roads, following the emergence of Rivers Task Force officials that had been deployed to various strategic points in the state to monitor all illegal business activities on the roads, he noted.
He, however, urge the state government not to relax on her good strides continuously keeping close tabs on the conduct of the recruited task force officials to ensure that they carry out their job according to the terms of reference given to them.
“On a serious note, let me also seize this opportunity to advise the officials of the Rivers Task Force to approach their job with utmost sincerity and not to betray the confidence reposed in them by the state government. Let them not extort money from the public, he said.
Okah used the opportunity to call on Rivers people to do well to embrace and support the good initiative of governor whose vision and steadfast commitment at all times, he said is to project Rivers State in good light before the outside world.
Governor Wike has not only written his name in gold with his laudable infrastructural development projects but has also set a high standard of good governance, which would be difficult to be equaled by his successors in the state.

The Cross River State Government has criticised the attitude of the Nigeria Centre for Disease Control (NCDC) and the Federal Government
(FG) over the handling of COVID-19 pandemic.
Addressing a crowded press conference in Calabar last weekend, the State Commissioner for Health, Dr. Betta Edu who is also the Chairman of the COVID-19 Response Team lamented that the two federal government
agencies are concentrating on announcing numbers of cases rather than looking for prevention.
“We have a lot of conspiracy theories, why Cross River State should be
COVID-19 free, that we are hiding cases, that we are killing our people in their houses, a whole lot is happening.
“The agencies rather than testing people who came down with samples, they did massive screening using the PCR method, it is sad to know that our country would refuse to support a State that is preventing the virus.
“Everyone is insinuating, everyone is pressurizing and everyone is insisting that Cross River State has a case of Coronavirus but trying
to hide it. The money we spent every day to do live broadcasts in many stations, at least N12m for hours each day, times the number of stations; times three months ran into billions of naira.
“If such money is giving to help States, the States will respond better, the federal government has glorified COVID-19 such that every day people are waiting to hear numbers, 350 new cases, 500 new cases, total numbers of cases is 10, 000.”
“If you say you have no case that is wrong, you must-have cases, you should test people in their millions, whether you have a sample collection kit or not doesn’t matter, whether you have the Laboratory to test people or not it doesn’t matter.
“You must test people in their millions every day that is the only time you will be politically correct in the eyes of the federal government, NCDC, NMA, Lab Scientists and others projecting the conspiracy theory.
“The prevention doesn’t matter. Prevention is not important for Nigeria and that is why you will not get any support to continue to prevent cases or protect your people. Maybe we should change our strategy, open our borders, and dole out cases in thousands,” the commissioner noted.
She explained that the State Government had been able to set up isolation centres, and working with partners in the UCTH.
“We have at least a 130-bed space with beds inside them. When the NCDC and Federal Ministry of Health and the National Primary Health Care Development Agency came they went in there and saw everything.
“We have a laboratory which has two machines that are solar-driven which can hold over 100 samples at every point in time. We called on
the NCDC, Federal Government to get that running, to configure the software to get it running but we have not seen any of that.
‘We did not only provide an isolation centre but we have a hotel facility which has been dedicated to housing staff, health workers who
are dedicated to working at the Isolation centre. No support from anywhere, not even from NCDC or the Federal Government.
“A lot has been done by the Cross River State Government but rather than getting a commendation, we continue to be pressured for not having COVID-19,” the Chairman contended. 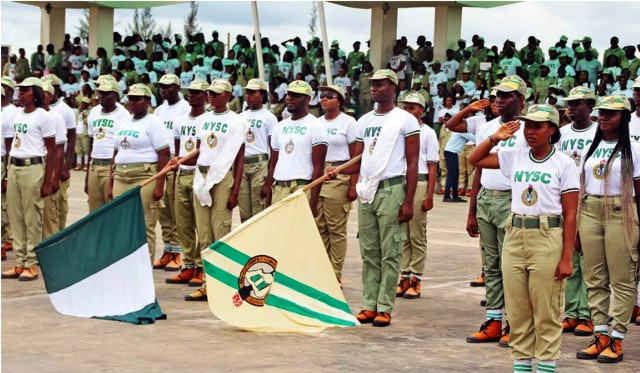 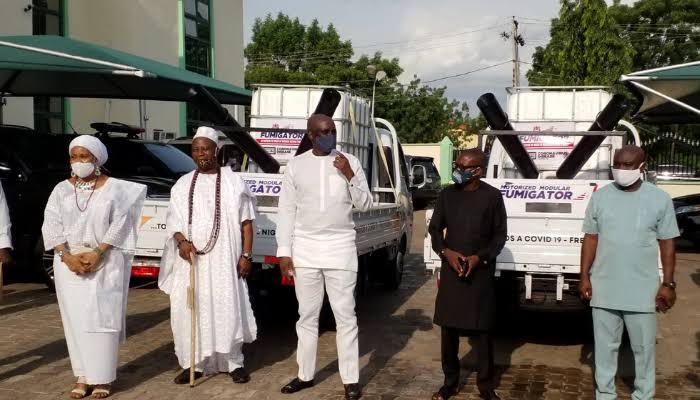 … As Okowa Lauds Collective Efforts Against Pandemic
The Ooni of Ife, Oba Adeyeye Enitan Ogunwusi Ojaja II, has presented two locally-fabricated modular fumigators to Delta Government to assist the state in its effort at containing the spread of the Coronavirus pandemic.
This is just as Governor Ifeanyi Okowa lauded the collective global efforts in the fight against COVID-19.
The monarch, who was represented by his Director of Media and Public Affairs, Comrade Moses Olapare, in Asaba said that the Coronavirus was a common enemy that required the cooperation of all to defeat it.
According to him, the fight against the pandemic calls for a collective effort as it is no longer practicable for monarchs to sit down and watch government tackle societal problems alone.
“Our leaders, at both federal and state levels, have done very well in the fight against the virus and in this regard, we have decided to complement the efforts of the government and that’s why we came up with this innovation for motorised modular fumigators.
“The fumigators were invented by the House of Oduduwa and fabricated at the Ooni palace in Ile-Ife with 100 per cent locally-sourced materials.
“It is our belief that the era when monarchs sit in the comfort zone of their palaces and expect the government to do it all is over.
“So, we have decided to join hands with government to tackle this pandemic by this donation of two motorised modular fumigators.
“We have watched your proactive approach to the fight against the pandemic in Delta and I must say that we are pleased with every step you have taken so far.
“This is why we are committed to working with government by making this donation, because together we can fight the battle and together we shall win the battle,” he stated.
Receiving the equipment, Delta Governor, Sen. (Dr) Ifeanyi Okowa, thanked the Ooni for his thoughtfulness and innovation in the production of the motorised fumigators.
The governor, who was represented by Secretary to the State Government (SSG), Mr Chiedu Ebie, said that the state had put in so much to ensure that COVID-19 was contained in the state and called for further support and cooperation in the fight against the pandemic.
“We thank His Imperial Majesty for his wonderful donation today. In Delta as at today, we have recorded 27 cases while 12 have been successfully managed and discharged; unfortunately we lost five of the cases.
“We have done so much to ensure that we are able to contain the spread of the virus in the state and this we have done by ensuring closure of our 13 boundaries to contain the spread of the virus in the state.
“We are indeed very delighted that His Imperial Majesty came up with these innovative fumigators in his bid to contribute his own quota in the fight against COVID-19 and he is going around the states to donate them.
“We thank you very much for the thoughtfulness and the innovation in coming up with this and it will definitely go a long way in the fight against COVID-19,’’ he said.
The Commissioner for Environment, Mr Chris Onogba and his Agriculture and Natural Resources counterpart, Mr Julius Egbedi, witnessed the ceremony.
From Albert Ograka, Asaba.