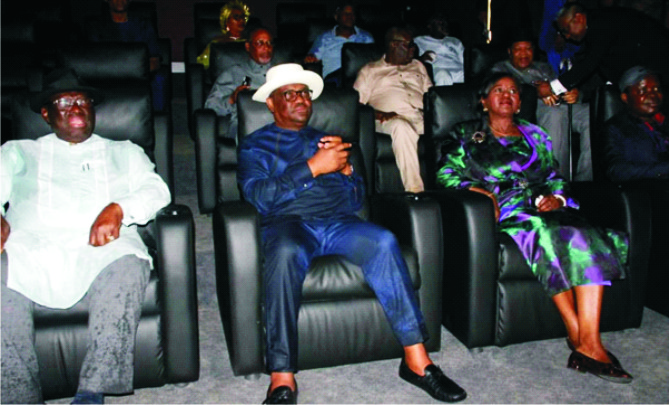 It is boom time for movie buffs and other fun lovers in Port Harcourt,capital of Rivers State and environs following the return of the cinema culture to the garden city as the State Governor, Chief Nyesom Wike commissions the Port Harcourt pleasure park cinema as part of activities to mark his 100days in office.
The event which took place on Wednesday September 11th 2019 attracted top government functionaries which included Rivers State Governor, Nyesom  Ezenwo Wike, Deputy Governor Ipalibo Harry Banigo and chairman, Greater Port Harcourt City Development Authority, Chief  Ferdinand Alabraba, among others.
The event also attracted dignitaries from the movies, music and comedy industries as well as showbiz personalities.
Commissioning the Port Harcourt Pleasure Park Cinema,   Governor Wike said that Rivers people should expend their funds on relaxation and entertainment facilities in the state capital.
Governor Wike said: “This time, there is no need to travel to Dubai,  United States or United Kingdom to relax or be entertained.
“We now have such facilities here in Port Harcourt.  We have provided entertainment facilities to stop our people  from travelling  out for  that purpose. Spend your money in our State. There  is no need for you to go to Abuja”.
The Governor said that the new cinema though built by the Rivers State Government,  would  be administered by a private investor for sustenance.
He added that high level security had been provided in and around the Port Harcourt Pleasure Park to protect the serene and beautiful facility.
He assured that the Rivers State Government will continue  to work to satisfy  Rivers people and create the right environment for them to live comfortably.
Governor Wike reiterated that the leadership of the State will not succumb to blackmail  and negative propaganda.
Earlier in his post on social media, the governor stated that the park was born out of the vision to have a world class recreation center and the cinema was a valued addition.
Also speaking in an interview with The Tide, the former chairman Performing Musicians, Employers, Association  of Nigeria (PMAN), Mr Robin Maja, (The farmer) described the new cinema as the harbinger of a new dawn in the entertainment industry in the state.
He said it will also help to reduce tension in the society as it provides the needed avenue for fun and relaxation.
Also speaking, Port Harcourt based movie star and publisher of Nollywood Magazine, Mr Innocent Okereke, noted that the pleasure park cinema will soon become a centre of attraction for all movie lovers in the State which would go a long way in reviving the cinema culture which had suffered decline in the past as a result of the advent of home videos in the country.
It would be recalled that the pleasure park was commissioned by Chief (Barr) Nyesom Wike on Friday, 26 May,2017 in a grand style that attracted thousands of Rivers people from all walks of life.
It is a public recreational park located at Rumuola town along Aba road near the 2nd amphibious brigade barracks also known as Bori Camp, Port Harcourt. Apart from providing fun, excitement and relaxation, the park also serves as a tourist destination and a revenue generators for the State.