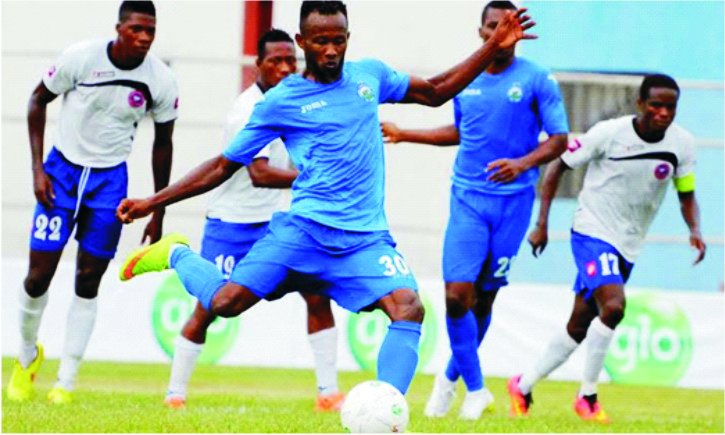 Coach, Enyimba International FC of Aba Usman Abd’Allah, has called on the Abia State Government to give the Enyimba Stadium standard floodlights to attract more international games to the arena.
Abd’Allah made the appeal in an interview with newmen on Wednesday in Aba.
The coach said the African Football Confederation’s (CAF) concession to have Enyimba’s match with Al Hilal of Sudan in the group stage of the CAF Champions League played in Aba was an “exceptional approval”.
“The closed door match we played with Rahimo of Burkina Faso was because we do not have standard floodlights.
“The main issue is getting standard floodlights and the second issue is the security at the stadium.
“They (CAF) are worried about the security situation of the Enyimba Stadium,” he said, noting that the environment for the match could be cleared some hours to the match but the floodlights, we have to get them.
“Those are the main issues CAF is complaining about but out of the two, the most crucial is the floodlights.
“I know the state government has been trying for us but we want it to do more and give us standard floodlights at the stadium.”
Tidesports source gathered that last year, CARA Brazzaville of Congo complained about the floodlights at the stadium during a CAF Confederation Cup game at the venue.
Enyimba, the Nigerian champions were made to play their CAF Champions League preliminary round tie with Rahimo behind closed doors because of concerns over stadium status and security.
African football’s governing body said the stadium, which was re-opened last year after three years of major renovations, still lacked standard floodlights, CCTV cameras and an electronic scoreboard.
CAF is due to conduct another inspection of the stadium on a yet-be- disclosed date before the match.
Enyimba will host the Sudanese side in Aba on Sunday after which they will play the deciding leg two weeks later in Omdurman, the second largest city of Sudan in Khartoum State.
On their preparations for the match, Abd’Allah said: “We are preparing very well for this match and the boys are doing very well.
“What is more important is for us to qualify for the group stage and we hope to get a very good result here before we go over there.
“We are focusing on taking the team through the group stage first.”

Coach Yusuf Back To S’ Eagles After One-Year Ban