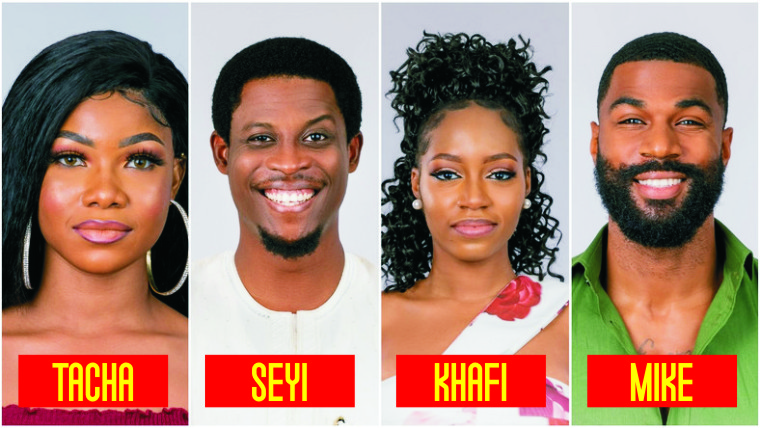 The ongoing reality TV show ,Big Brother Naija,  has taken a new twist as housemates are now doing last minute  alignment as the show gradually winds down.
The show which started two months ago has so far witnessed the eviction of fifteen housemates; as beauty queen and Nollywood actress, Venita was shown the exit door last Sunday.
Meanwhile, four top housemates,Seyi,Tacha,Khafi and Mike are up for possible eviction this Sunday, leaving fans and followers in suspense as to who amongst them will be evicted.
With eleven housemates remaining, the likes of Mercy, Diane, Elozonam and lover boy Ike are beginning to form cliques by putting up housemates they perceive to be threats to their chances of winning the N60 million naira prize money.
On the other hand,the trio of Seyi, Mike and Omashola who are obvious contenders and big threat to other housemates from the beginning of the show are also coming up to outsmart their rivals.
Interestingly, our Port Harcourt first daughter, Tacha, gave fans something to talk about again this week as she insulted  her friend, Seyi during last Sunday’s live eviction.
While responding to a question put across to her by the 2019 Big Brother Naija host, Ebuka Obi-Uchendu, Tacha said she had no issues with Seyi but that he sometimes acted childishly and went further to throw a jab at him, saying, “What I have achieved at 23, he has not achieved at 33”.
As the game gets tougher, the housemates are showing their true colours and they are doing everything possible to outsmart one another to ensure they remain in Biggie’s house till the last day.
However, housemates, Khafi Kareem, Mike Edwards, Tacha Akide and Seyi Awolowo have been put up for possible eviction this week.
Also, Cindy Okafor has emerged the current Head of House.
The  eviction list was announced on Monday night in the ongoing BBNaija season four.
For the 11th week, Biggie continued with the process of populating the eviction nomination list as housemates did the nominations.
Seyi nominated Tacha and Khafi, Mercy nominated Omashola and Tacha while Frodd nominated Mike and Ike for Eviction.
Also, Omashola nominated Mercy and Tacha, Khafi nominated Seyi and Mercy and Tacha nominated Seyi and Mike for Eviction.
Mike Nominated Omashola and Tacha, Ike Nominated Diane and Khafi, and Elozonam put up Frodd and Tacha for Eviction.
Finally, Diane nominated Omashola and Mike while Cindy nominated Diane and Ike for Eviction.
At the end of nominations, Khafi, Mike, Tacha and Omashola were put up for possible eviction. However, Omashola used his veto power to replace himself with Seyi.
Meanwhile, NAN reports that Cindy, who is a writer and radio presenter clinched the coveted Head of House (HoH) title on Monday, after winning the challenge.
The challenge required the housemates to throw plastic balls into hoops created by Big Brother. Each housemate had his/her hoop.
However, the twist to the game was that the housemate with the lowest amount of balls hanging on would either win or move to the next round.
Frodd, Diane, Cindy, and Mercy advanced to the next round, after succeeding in the first round.
For the next round, housemates were instructed to fill a test tube to the brim using a teaspoon with one hand.
Big Brother instructed each housemate to indicate when they are done filling the test tubes.
After two minutes, Cindy won, and she automatically became head of the house.
As perks for winning, she received 250 bet9ja coins, immunity for the week, and exclusive access to the ‘Head Of House’ room.
When asked to pick one of the housemates to enjoy the ‘Head Of House’ room, Cindy surprisingly picked Mike. It was gathered that housemates up for eviction will know their fates on Sunday.