The present constitution of membership of the Niger Delta Development Commission (NDDC) Board has continued to attract condemnation from within and outside the Niger Delta region.
This latest one came from King Leslie N. Eke, when he spoke Monday in an interview with newsmen at his palace in Woji in Obio/Akpor Local Government Area.
King Eke, who is also the Eze Oha Evo III of Evo Kingdom stated that the membership of the NDDC Board was not in the best interest of the region.
He said it short-changed the people of the area as non-Niger Deltans were fused in the system.”
According to the Eze Woji/Nyerisi Eli Woji, the NDDC was an interventionist commission for Niger Delta people and expressed regrets that concerned authorities are drifting from the core mandate of the agency.
The Eze Gbakagbaka, who doubles as the general secretary, Association of Niger Delta Monarchs of Nigeria, further said the people were never given any position or contracts in the North East Commission and added that the right thing must be done.
He expressed the view that politics or any form of National sharing formula should not be extended to the commission since it was specially penciled for a particular region for the aim of development of the area.
The traditional ruler, who went down memory lane stressed that the agency and its authorities should be bothered with providing the oil-rich zone with all the basic amenities and not inclusion of non-Deltans into the system.
“What the commission and its authorities should deliberate on should be how to alleviate the plight of the region and not to pile up the board with non-Niger Delta people” he said.
On the way forward, he called on the Federal Government to revisit the new board appointment and do the needful in the interest of justice and equity.
It would be recalled that the latest constitution of membership of the NDDC Board had non-Niger Delta people as members, which had raised high level of agitation within and outside the oil-rich zone of the country, a development which pundits argued contravenes some sections of the law that established the commission. 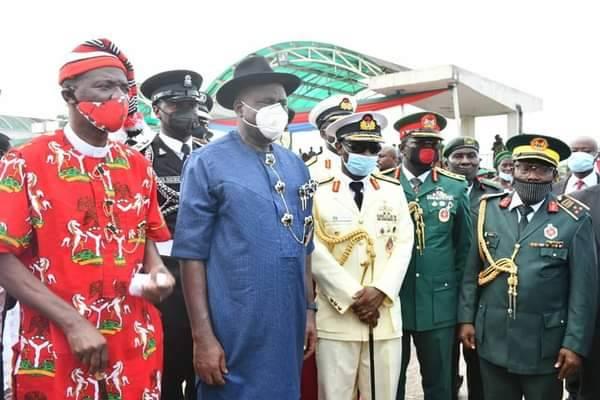 Bayelsa State Governor, Senator Douye Diri, has reaffirmed the commitment of his administration to the three senatorial road projects in the state.
Speaking at Aguobiri during an on-the-spot assessment of work on the Yenagoa-Oporoma Road in Bayelsa Central Senatorial District, Governor Diri stated that his government’s target was to ensure that this year, the road was tarred to Aguobiri as well as the bridge across the river was completed.
The project was started by the immediate past Senator Seriake Dickson’s administration.
A statement by his Chief Press Secretary, Mr Daniel Alabrah, quoted the governor as saying that once the bridge crosses the Aguobiri river, the government would ensure that the road gets to Angiama and later Oporoma, the headquarters of Southern Ijaw Local Government Area.
Governor Diri assured that the footprints of his administration would be felt in accordance with his election campaign promises.
He charged the company handling the project, Chinese Civil Engineering Construction Company (CCECC), to keep its side of the bargain, stressing that the state was in a hurry to develop.
“I am not a man of too many words and promises but what we promised during the campaigns was to ensure that the senatorial roads continued from where the former administration stopped”, he said.
“We have all seen the level of work already done. So, our target for them is to tar this road to where we are now at Aguobiri. By February, I intend to flag-off the bridge construction.We want Bayelsans to continue to support the prosperity administration. It is their administration and we believe that before we leave, they will feel our footprints”, he added.
Also speaking, the Commissioner for Works and Infrastructure, Surv. Moses Teibowei, assured that in a few days, the contractor would be mobilised to commence work.
Responding to questions from journalists, the CCECC Project Manager, Mr Eric Lee, said the company would ensure that the project was achieved within the specified time. 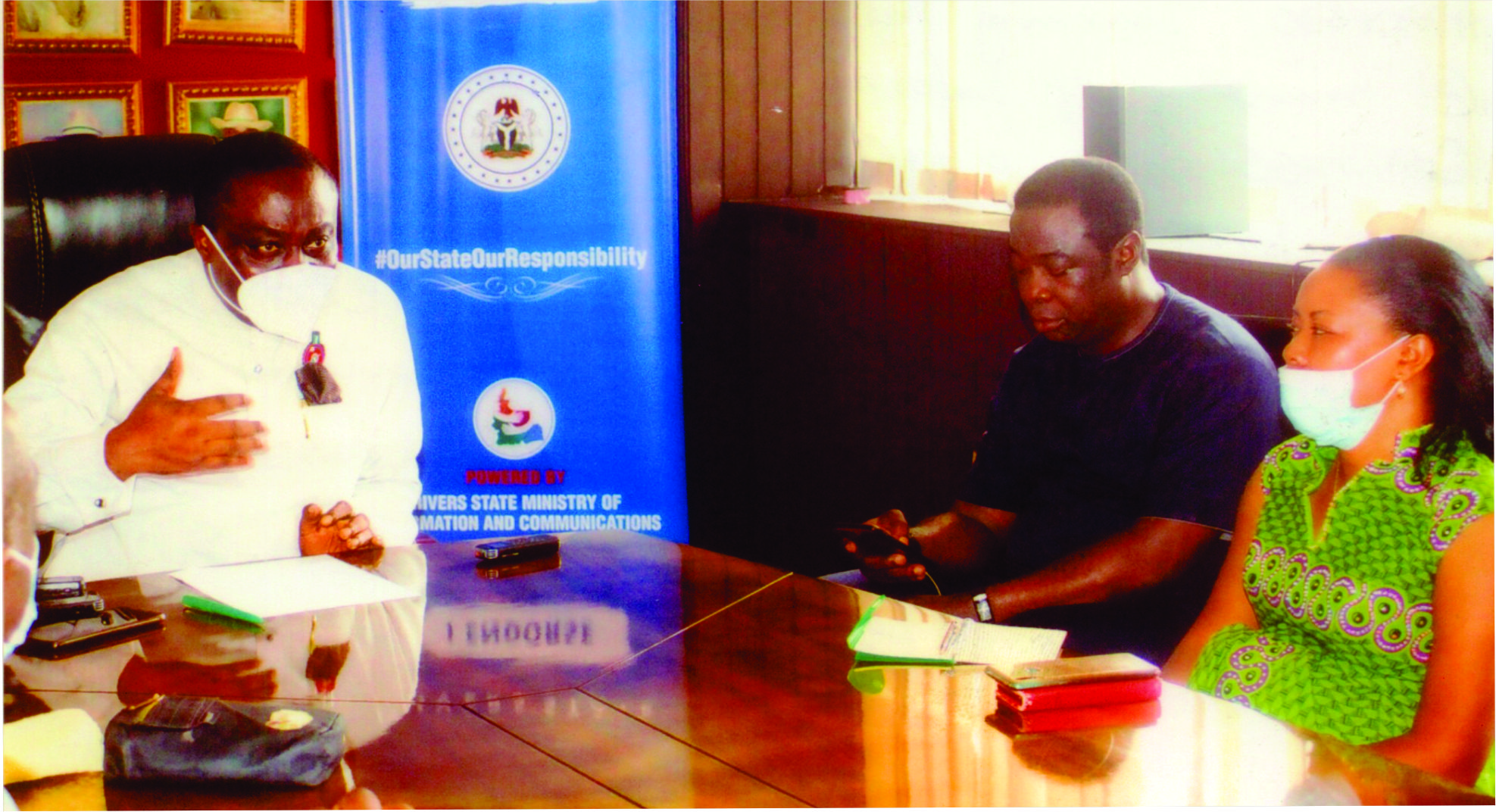 The Cross River State Government through the Office of the State Auditor General has introduced a platform that will ensure pensioners did not pass through the stressful and cumbersome process in verifying their pension status.
The State Auditor- General, Comrade John Mpama Odey, disclosed this to newsmen in Calabar while speaking on Government’s plans to sanitise the pensions’ payroll by eradicating ghost names and other fraudulent practices that had bedevilled the system in the past
Tagged ‘AM ALIVE’, this platform according to him will not only eliminate travelling long distances for verification purpose and time wastage on endless queues, but will also give the Pensioner the dignity of being the senior citizens which they are.
The State Auditor General explained that ‘AM ALIVE’ platform is simply “verifying the Pensioner’s BVN in order to authenticate his or her identity,” explaining further that the process only requires that the Pensioner goes to the bank where his or her pension is paid within three months and demand to do the ‘AM ALIVE’ BVN verification.
Thereafter the thumb print is then captured and sent to a Central Server after which a printout is issued to the Pensioner who then takes it to the Sub-Treasury Office.
He lamented that in the past, “Pension verification was based on the submission of documents and it was discovered that those documents could just be in the hands of an impersonator,” resulting in government paying Pensions to the wrong persons maintaining that the ‘AM ALIVE’ programme saves the pensioner from stress and helps the “Government to determine who actually is alive and should receive Pensions.”
In another development, Organised Labour in Cross River State has picketed the office of the Accountant General of the state over non-remittance of deductions made by them.
NLC was said to have ignored the Chief of Staff to Governor Ben Ayade, Mr Martins Orim, who had pleaded with protesters to exercise restraint
The union continued to block the Accountant General’s office over the deductions from workers’ salaries which labour claimed was not being remitted to the bank for those who borrowed from different banks, just as the union was also angry over the refusal of the accountant general to remit money deducted for housing purposes to mortgage banks.
However, the Accountant General, Mr Joseph Adie had met with labour and promised to look into their case, promising that something would be done about it before the end of the day.
Meanwhile, the State Chairman, NLC, Mr Ben Ukpebi, said the union decided to hear from the accountant general but he did not solve the situation as promised.
“We arrived here today only to discover that the AG did not do anything. So we are picketing his office and we will not listen to anybody until they meet our demands,” Ukpebi said.
But as they gathered in front of the gate, the Governor’s Chief of Staff Martins Orim, arrived to address them but the union shunned him and insisted on speaking with the governor.
It was gathered that the office of the accountant general has been deducting money from workers’ salaries for those who got loans from the various banks, but never remitted funds to the affected banks.

Twelve staff of the Nigerian Correctional Service, Edo Command, were on Saturday given cheques for more than three million naira to support their treatment for injuries sustained during the #EndSARS protest.
The Controller of Command, Mr Felix Lawrence, presented the cheques to the beneficiaries in Benin.
He thanked the workers for their commitment to duty and resilience.
According to Lawrence, the Controller-General of the Service, Mr Ja’afaru Ahmed, gave approval for the issuance of the cheques.
He said that the gesture was to provide succour for the injured workers.
The controller called on officers and men in the command to be more dedicated to their duties.
Responding on behalf of the beneficiaries, Mr Ombu Michael, whose head and face were stitched due to injuries, expressed gratitude for the gesture.
He said that the gesture would encourage the injured workers to be more dedicated to their duties.
The Tide reports that the beneficiaries received the cheques through the Correctional Welfare Insurance Scheme (CWIS).
The CWIS was put in place to meet the medical and welfare needs of Nigerian Correctional Service staff in the event of occupational hazard.
Recall that, on October 19, 2020, hoodlums that hijacked the #EndSARS protest attacked the Benin and Oko correctional centres.
More than 1000 inmates escaped during the attacks.