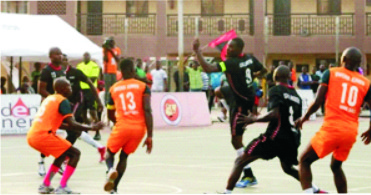 Kada Queens basketball
players of Kaduna are boycotting training over 20 months unpaid allowances.
The protest is coming two days to the commencement of the second phase of the Zenith Bank National Basketball League.
Some of the players told newsmen that the state government which owns the team have completely neglected them.
“We are not suspending our protest until we get paid our entitlements,” one of players said on condition of anonymity.
“There is no hope for the second phase of the Zenith Bank league for us, because we have not received any allowance since last year.
“They are always begging us and giving fake promises without fulfilling any.
“We always do our best to make them proud during league season but we don’t get appreciated.”
Another player said: “Some of us are coming from distant places to play and cannot continue to play without allowance.
“Apart from our personal needs, we also have parents and siblings to cater for.
“We don’t trust the management any longer as previous promises to offset the allowances have gone unheeded.
“If the management value our welfare and the interest of the team, they would do everything possible to settle our allowances.”
The fear of most of the players is that the club management will not pay the outstanding entitlements once the league comes to an end.
Reacting to the players’ protest, Head coach of the team, Simsim Morrison, appealed to them to exercise more patience as the management was working towards offsetting the allowances.
“The players are right to demand for the payment of their allowances, but the timing should be put into consideration.
“I am appealing to the players to exercise patience as we are also looking for a good response from the government.
“We will always insist that the players should be motivated at all times so that they can give us their very best and make our job easier.”
The coach expressed concern that the team may not do well in the second phase of the league if the players refuse to  return to training.
“Right now the players are putting us into a very tight corner knowing the task on our hands.
“The second phase will begin tomorrow and we are supposed to travel for the competition.
“We are still appealing to the state government for release of funds to enable us participate fully in the league season.
“ We appreciate their support for us all this while, but we need funds to enable us get kits for the club, traveling allowances for players and officials, and salaries.
“Since last year, we have been having challenges with funds which affected our performance, but we pray they release the funds, in order to motivate our players,” Morrison said.
However, efforts to get the reaction of the state Director of Sports, Yakubu Ibrahim, was not successful as he was said to be attending a promotion examination.