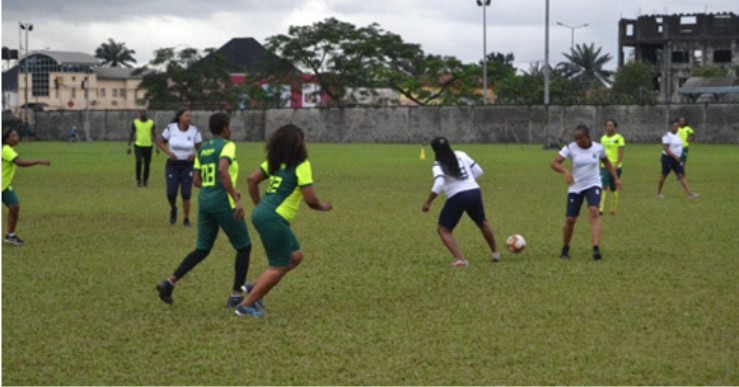 The institute of Charter Accountants of Nigeria (ICAN), Port Harcourt District, has promised a return match to their professional counterpart, Institute of Personnel Management (CIPM), after suffering a 2-1 defeat in a novelty match between the female wings of the bodies in Port Harcourt.
The chairman of ICAN, Princewill U. Elendu in his address shortly after the match said the defeat was due to the short notice of the invitation and to compensate their friends on their programme “South-south zonal Human Resources conference,” hosted by the Rivers State branch of CIPM.
“The notice was very short, our ladies tried to have played like this without training. We will go home, train and come back for a return match”, he said, adding the need for other professional bodies to borrow a leaf from CIPM.
The match which kicked off at about 4:30pm at Shell residential area football pitch saw the two teams showcasing strength which paid-off for the host team as Mrs Helen Ofor initiated a pass from Chinenye Ezeji to launch the first goal for CIPM, five minutes into the match.
The host maintained the pressure which resulted into an own goal increasing CIPM score line to 2-0 till the end of the first half.
In the second half, the ICAN team regained their confidence and fought like a wounded lion which paid off as Helen Irobuise launched the 1st goal for ICAN 15 minutes into the 2nd Half bringing the score line to 2-1 till the end of the match.
Speaking in an interview with Tidesports, the first goal scorer for CIPM, Mrs Helen Ofor said the match was very eventful and fun, stating that the match has provided a professional bond and friendship network between the two groups.
ICAN team coach, who is the Vice chairman of Port Harcourt & District Society, Mr Philips Ezeh commended his team for a good outing, adding that with this type of performance the ladies can go places when fully prepared.
In his address, the chairman of CIPM, Rivers State branch, Mr Henry Unuakpor commended ICAN for honouring their invitation and releasing their women to play the novelty match, adding that the match marked the beginning of their programme themed; “HR: inside-out”
CIPM chain noted that the programme which has a week-long activities would climax on September 6th in Port Harcourt, adding that the football match between the two professional bodies was a good take-off.
The highlight of the event was the decoration of the players with medals and the participation award to ICAN.