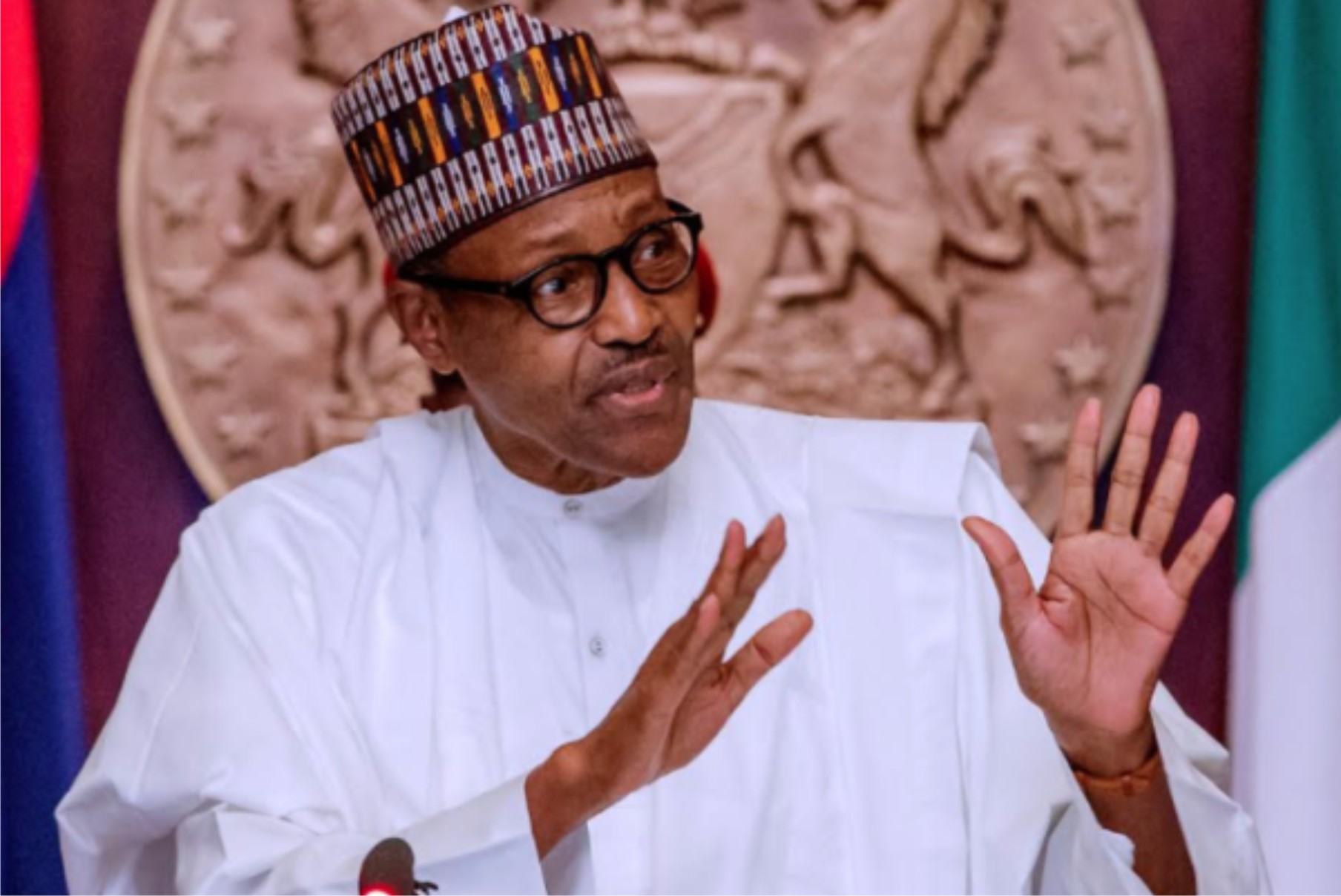 President Muhammadu Buhari at the weekend said four centuries after the first 20 documented African slaves arrived on the shores of Virginia, the slave trade still exists.
The president said this via a statement released on Saturday to mark the International Day for the Remembrance of the Slave Trade and Its Abolition.
Buhari said in the years that followed, millions more were shipped in dehumanising conditions across the ocean and enslaved.
“Slavery had, of course, existed before. But this indicated the beginning of a mechanised trade that saw human beings reduced to property on an unprecedented scale,” he added.
The president explained that despite the fact that descendants of African slaves have made valuable contributions across society, they are still dealing with the effects of this poisonous legacy. They still have to navigate its everyday manifestations, such as discrimination, racism or lack of access to resources and opportunities. This must not be overlooked or forgotten.
Yet, as we reflect on this day, International Day for the Remembrance of the Slave Trade and Its Abolition, it is clear slavery did not only thrive then. It still thrives today. Across the world it is estimated there are as many as 40 million men, women and children living in forced servitude. They are the industrial victims of a business many believe was abolished hundreds of years ago. They are the modern enslaved.
Their exploitation appears in many guises, though usually unrecognized as slavery. Many victims are unseen, hidden beneath opaque supply chains. Others are hidden in plain sight, entrapped by circumstances that rob them of autonomy. In any case, their labour, often dangerous, is no product of choice and its conditions are self-perpetuating.”
He said in Africa, its modern forms include debt bondage, the enslavement of war captives, commercial sexual exploitation and forced domestic servitude. Holding people held against their will, controlling their movements and forcing them to work for the sole profit of others – wherever they are – is slavery today and always.
The abolitionists of the 19th century succeeded more than any before: By working to extinguish the transatlantic slave trade that had claimed 15 million victims, they laid the groundwork to ensure it did not manufacture millions more. But their work is not done. We must take up their examples as we forge a path forward to eliminate modern-day slavery in all its forms.
Slavery, once again, has become entwined in the global economy – and it is largely unseen. For instance, most of us might know in principle that the mining of cobalt crucial to our smartphones might have used forced labour.

Rivers State Chairman of the Peoples Democratic Party, PDP, Ambassador Desmond Akawor, has charged women in the state to pray fervently for a peaceful and  smooth transition come 2023.
Addressing women leaders of Grassroots Development Initiative (GDI) from Degema Local Government Area on a solidarity visit to the new executive at the party secretariat in Port Harcourt, Ambassador Akawor told them not to allow  2023 governorship ambition of any individual to tear them apart.
The State PDP Chairman, who was represented by his Deputy, Hon Chukwuemeka Aaron, warned them against associating with any individual alleged to be nursing governorship ambition.
“The only support you can give this executive and the administration of Governor Nyesom Ezenwo Wike is your prayers, we need the prayers of women to keep the state peaceful and united”, Akawor said, urging all PDP members to continue to have faith in the party and exercise patience in order to reap the fruits of their labour.
He thanked the women leaders for the visit, saying that they were the first women group to visit the PDP Executive since their inauguration and enjoined the GDI delegation to continue to support the new executive.
According to Ambassador Akawor, “ GDI has been supportive to PDP in its activities, GDI was instrumental to PDP election victories in 2015 and 2019, your support was not in vain because Governor Nyesom Wike has done very well and made the state proud.
Speaking earlier, the leader of GDI Degema chapter, Mrs Agiriba Bibi, said their visit was to identity with the new leadership of the Peoples Democratic Party in the state and congratulated them.

Governor Nyesom Wike had severally expressed fear that the APC is a desperate party and would use security agencies to intimidate it’s political opponents in it’s effort to manipulate the Saturday election as was done in Rivers State during the 2019 general elections.
“They will come with federal might. But do not fear because we have the electorate on our side.
“They did same in Rivers State. The people resisted them by protecting their votes”, he said and advised Edo people to stand firm against any move to manipulate the election against the will of the people.
Giving the charge at a meeting for leaders and elected representatives of PDP in benin City last week, Governor Wike stressed the need for the people to work together to liberate the state from godfathers who were frustrating development in the state.
Not convinced by the promise made by the Police and the Independent National Electoral Commission, INEC, Wike, during the PDP mega rally last week said: “ use Edo election to end godfathers . Make sure you vote and be vigilant too.
“ I agree with the Independent National Electoral Commission that the election will be free and fair. Even the Inspector General of Police has promised that nobody will rig the election. But do not leave the polling unit after casting your votes.
“Repeat the Rivers State Model. Let everywoman wear jeans on election day, cast and defend your votes”.
The PDP National Campaign Council Chairman for Edo 2020 Governorship Election, Chief Wike had during a radio interview programme monitored from Port Harcourt, last Thursday, said no politician will cause violence if INEC and police do not compromise.
“Complete manipulation of the electoral process causes violence. No politician will cause violence if the police and INEC do not compromise”, he said.
Another major issue last week in Government House, Port Harcourt was the redeeming of Rivers State Government promise of N30 million bounty to anybody with useful information that could lead to the arrest of one Bobosky, a notorious criminal in Ogoni.
Represented by the Secretary to the State Government, Dr Tammy Danagogo, the Governor presented a cheque of N30 million to the Rivers State Commissioner of Police, Joseph Mukan.
“ I want to thank the police officers under your command for the gallantry displayed in arresting that deadly criminal. Let me also thank the informant who had confidence in you and also trusted Government”, he said.
Issues bordering on the last week gubernatorial election in Edo State dorminated affairs in Government House, Port Harcourt last week.
This is as the state Governor, Nyesom Wike, who played the strategic role of the Chairman, Peoples Democratic Party National Campaign Council, Edo State 2020 Governorship Election, was involved in finishing touches to the election.
In discharging his role as the PDP National Campaign Council Chairman for the election, Governor Wike’s life was threatened during the Saturday election as information filtered into the state that the hotel he was staying was under siege by over 300 armed policemen.
The release signed by the Honorable Commissioner for Information and Communications, Mr Paulinus Nsirim, raised the alarm, and said the policemen led by DIG Leye Onyebanji had been very audible with threats that Governor Wike should leave Edo State.
The release said: “ We want to be place on record that the Rivers State Governor was appointed the Peoples Democratic Party, PDP National Campaign Council Chairman for the September 19th 2020 Edo State Governorship Election.
“ This is a legitimate constitutionally recorgnised appointment in the  electoral rules, guidelines and processes of our country”.

What Happened In Lagos Couldn’t Happen In Edo – Onuesoke

Former Delta State Gover
norship aspirant, Chief Sunny Onuesoke, has told Comrade Adams Oshiomhole that what happened in Lagos State could not happen in Edo State, hailing the re-election of Mr Godwin Obaseki, who defeated his closest rival, Pastor Osagie Ize-Iyamu of the All Progressives Congress, APC.
Onuesoke said the declaration of Mr Godwin Obaseki of Peoples Democratic Party, PDP as the winner of the Edo gubernatorial electon shows that Comrade Adams Oshiomhole and his co-travellers have failed.
He had repeatedly counselled that Edo State remains Edo State and cannot be likened to Lagos State that has remained under the grip of few persons over two decades.
Onuesoke, in a statement yesterday, after the declaration of the election results by the Independent Electoral Commission, INEC, reiterated that his wise counsel to the All Progressives Congress, APC chieftain to refrain from getting involved in the moves to foist an unwelcomed candidate as governor for the good people of Edo fell on deaf ears.
He said: “the failure of Comrade Adams Oshiomhole to heed my counsel, has further dampened his already dwindling political relevance in the Niger Delta region and the country at large.
“Edo State can never be Lagos State that few persons have pocketed for selfish gains as the people of Edo State are strong-willed and know when to say no to bad governance, bad leadership and autocracy.
“With a clear lead in 13 local government councils in Edo state, the people are celebrating their victory over despotic and unwanted elements whose only purpose and intent of contesting the governorship was to impoverish the state and people of their resources through fraudulent means.
“It would have been very unpatriotic for anybody or group to foist a leader on the good people of Edo State who have taken a collective decision to return Godwin Obaseki and Phillip Shaibu back to the office to finish the good work they started in 2016”.