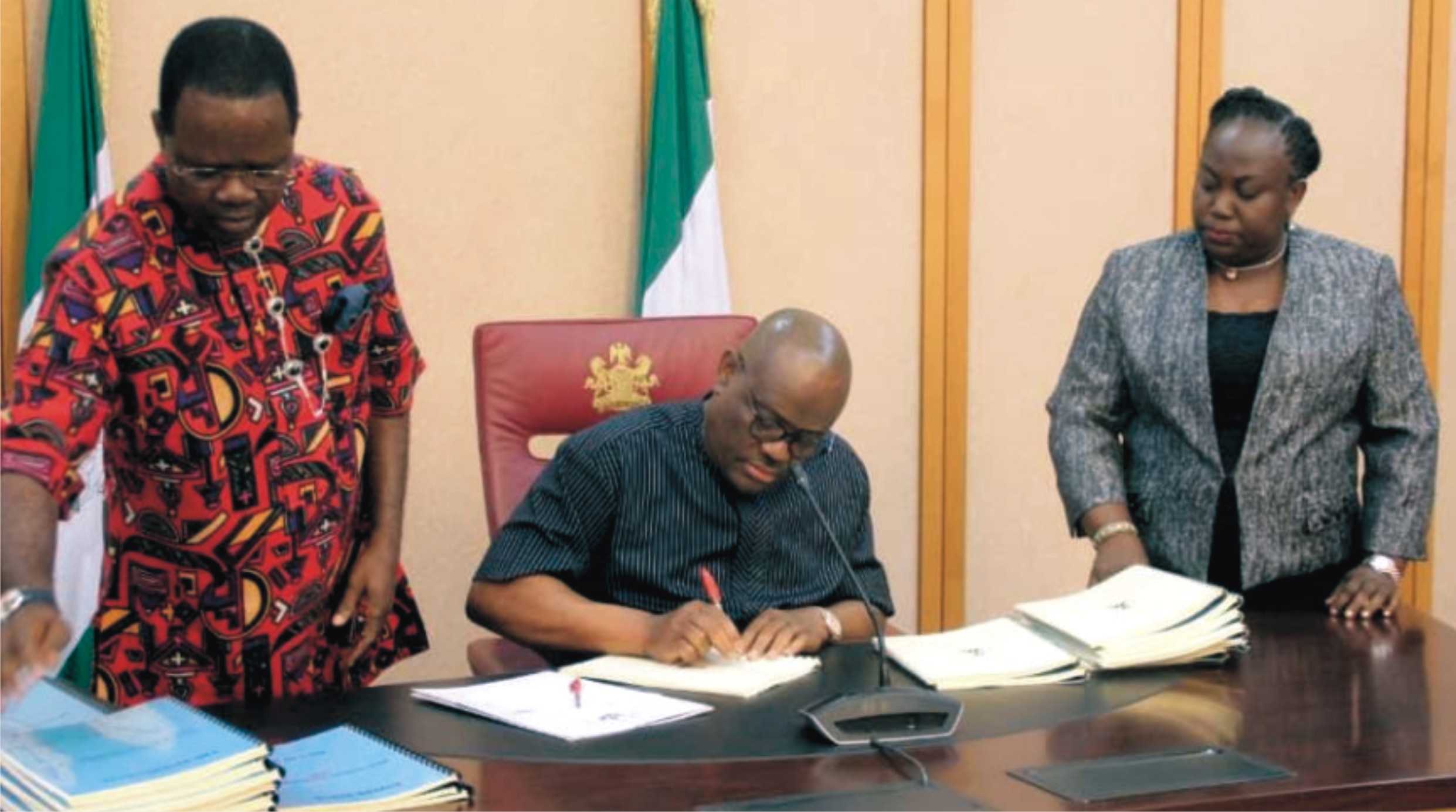 The entire courtroom of the Rivers State Governorship Election Tribunal was stunned to silence, last Friday, as two witnesses presented by the defeated Action Democratic Party (ADP) Governorship Candidate, Mr Victor Fingesi, confessed that they were procured to lie on oath.
The two witnesses, Mr Madume Wali from Ikwerre Local Government Area and Igonikon Gbeinyaa from Buguma in Asari-Toru Local Government Area of Rivers State, who impersonated members of Action Democratic Party (ADP) told members of the Governorship Election Petition Tribunal sitting in Port Harcourt that they were hired and bribed to testify against the election victory of the state Governor, Chief Nyesom Wike and the Peoples Democratic Party (PDP).
Our correspondent reports that trouble started when the two supposed ADP witnesses, under cross-examination by Counsel to Wike, Emmanuel Ukala (SAN), drew the attention of the tribunal to an election data tendered before the tribunal on the discrepancies surrounding the identity of the witnesses, and informed the tribunal that the two were impostors and false witnesses employed by the ADP to raise false allegations against his client.
That observation by Wike’s lawyer put off the first witness and the impersonator, Mr Igonikon Gbeinyaa, which made him confess to the tribunal that he was not Mr Stanley Okereke from Port Harcourt City Local Government Area, who served as collation agent in Ahoada West Local Government Area during the March 9, 2019 gubernatorial election but that he was paid to impersonate actual collection agent at the tribunal.
Also testifying before the tribunal, the second witness, Madume Wali, during cross-examination, told the tribunal that he was battling with his conscience to confess the crime.
He said that he collected money from the ADP governorship candidate, Mr Victor Fingesi, to lie before the tribunal, adding that the statement of witness on oath as tendered before the tribunal by the ADP governorship candidate was not from him.
It took the intervention of the lawyers at the tribunal to intercede on behalf of the two false witnesses for the tribunal judges led by Justice J. A. Orjiakor, to let them go free as the tribunal judges were bent on having them punished for lying on oath.
Speaking to journalists outside the courtroom, Counsel to the ADP, Dolapo Anthony said the testimony of their witnesses came to him as a surprise and shocking, adding that the duos were not bribed by anybody.
On his part, a member of the legal team representing the PDP, and Governor Nyesom Wike in the tribunal, Godwin Obla urged the ADP counsel to apologise to the tribunal for bringing false witnesses to the court.
It would be recalled that the tribunal, had earlier dismissed the petition of the Action Alliance Congress (AAC) and its candidate in the governorship election, Engineer Biokpomabo Awara against the victory of the state Governor, Chief Nyesom Wike.
The Independent National Electoral Commission (INEC) had declared Wike of the PDP winner having polled 886, 264 votes to defeat his closest challenger, Biokpomabo Awara of AAC, who scored 173,859.
Meanwhile, residents and motorists in Port Harcourt City have commended the Rivers State Governor, Chief Nyesom Wike for the commencement of preliminary works aimed at fulfilling the pledge to construct a flyover at the Garrison Roundabout on the ever-busy Port Harcourt-Aba Expressway.
In his address after taking the oath of office for a second term on May 29, Wike announced that his administration would construct flyover bridges at Rumuokoro, Garrison and Artillery in Port Harcourt.
The residents said that by taking steps to fulfill his pledge, Wike has proved that the people were right to have re-elected him.
A resident, Ifeanyi Nicholas noted that the governor was working hard for the development of Rivers State and the construction of key infrastructure projects.
He said: “Mr Projects is trying for the people of Rivers State. The fact that he is constructing this flyover shows that he means well for the people of the state.”
Another resident, Ola Olaniyi said that the flyover was needed at this time to resolve the traffic congestion at the area, and thanked the Rivers State governor for addressing the challenge.
“We have been expecting a flyover at this point for several years. We are happy that Governor Wike is constructing the flyover at Garrison. We are happy that the contractor is already on site, and they are taking the measurements to begin work”, he said.
On his part, Innocent Uya thanked Governor Wike for his commitment to making the lives of Rivers people easy.
Uya said: “We are happy that the governor is committed to making our lives easy. This flyover is necessary, especially now that more Rivers people are buying vehicles in line with the growing economy.”
“There is also the fundamental that all leaders continue to respect the purpose of their election by serving the people like Governor Wike”.
Other respondents while thanking the Rivers State governor for taking steps to construct the flyover, said they were looking forward to using the facility.
Enyinna Advance said: “It is a welcome development that the governor is taking steps to fulfill his pledge to the people because the roundabout at the place is becoming choked up.
“A new flyover at the Garrison Roundabout will resolve the traffic gridlock along Aba Road and help us ease traffic on this important road.
“We are happy with this welcome development. The people know that he is Mr Projects, that is why they voted for him for a second term”.
For Ezenye Felix: “This roundabout is now causing traffic congestion and a flyover will help resolve the challenge.
“I pray God to protect him to continue to do the best for Rivers people. He is a hardworking governor who loves the people of the state”, he added.