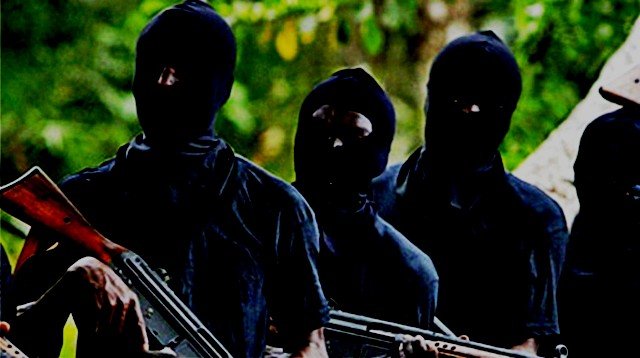 No fewer than three persons were, yesterday, kidnapped in a fresh bandit attack which sacked Dan-Ali village in Danmusa Local Government Area of Katsina State.
The attackers also robbed the residents of their money and valuables.
A resident in the community, Malam Tukur Dan Ali, while confirming the incident, said his relative was part of those kidnapped.
According to Dan Ali, the bandits in their dozens arrived in the village around 1:25 am, yesterday, and kidnapped three young persons, one of whom is a woman.
He added that the attackers shot into the air to scare residents.
“The bandits made several gunshots sporadically and made their way into the houses of Alhaji Musa and Alhaji Gambo where they kidnapped the three persons,” he explained.
He said the bandits had however released one of the victims, Hajiya Fatima unconditionally.
He lamented that security operatives were yet to arrive in the village even as at 5:30 a.m.
Meanwhile, efforts to reach the spokesman of Katsina State Police Command, SP Gambo Isah, proved abortive as calls made to his phone were not picked or returned.
Similarly, no fewer than 23 persons were killed, yesterday morning by bandits in mob clash in Kabaje and Tunga communities of Kauran Namoda Local Government Area of Jigawa State.
It was gathered the attacks occurred around 5am.
Reports said the attacks were triggered by a mob action of a wife of one of the bandits, called Anas.
The incident, it was learnt, led to the killing of the couple’s child and three other persons.
The bandits allegedly mobilised and killed 23 persons in a reprisal attack few minutes after.
Anas said to be a resident of Unguwar Sarki in Kabaje was suspected to be one of the informants to the bandits.
The Zamfara Police Command, yesterday, confirmed the killing of 23 persons in Tunga and Kabaje villages, Kaura-Namoda Local Government Area by suspected bandits in the early hours of the day.
Confirming the incident, the state Police Public Relations Officer in the state, SP Mohammed Shehu, said “it is true that the bandits killed 23 persons in the attack.
“At the moment, peace has been restored in the affected areas and a combined team of mobile and regular Police, the Army and Air Force are on surveillance in the area.”
Earlier, the Chairman of Kauran Namoda Local Government, Alhaji Lawal Abdullahi Isa, confirmed the incident.
Isa, had told newsmen that bandits numbering over 100 riding on motorcycles, invaded two communities in the early hours of yesterday when residents were going to their farms.
He said that the bandits may have come for reprisal following the killing of one of their suspected informants whose name he gave as Anas.
The chairman said that unknown to Anas, he was trailed by local vigilantes when he picked a wife and child of a suspected bandit at Angwan Sarki village to take them to the man in the bush on his motorcycle.
“The vigilantes blocked the rider and killed all three instantly on Monday and at about 5 ‘O’ clock the following morning, the gang invaded the villages and killed the victims,” he said.
He said all the villagers killed had been buried in the two villages according to Islamic rites.
Isa appealed to security agencies to consider going to the identified hideouts of the bandits, especially at Gidan na Zumbure village “which now harbours the bandits and serve as their base for launching attacks.”
However, the Army said, yesterday, that it killed two terrorists, who attempted to cross into the Sambisa forest from Gwoza-Dure road in Borno State.
The Acting Director Army Public Relations, Col. Sagir Musa, confirmed this in a statement.
Musa said that the incident occurred on Sunday as troops embarked on a fighting patrol under the newly inaugurated “Operation Hallaka Dodo’’ by the 7 Division, Maiduguri.
He said that the terrorists were attempting to move into the forest with supplies for their fellow insurgents when the troops engaged them.
He said that assorted drugs and medicines were recovered from them.
Musa added that although the situation within the general area of the Division was calm, Operation Hallaka Dodo was being conducted by all Brigades and Battalions in their areas of responsibility.