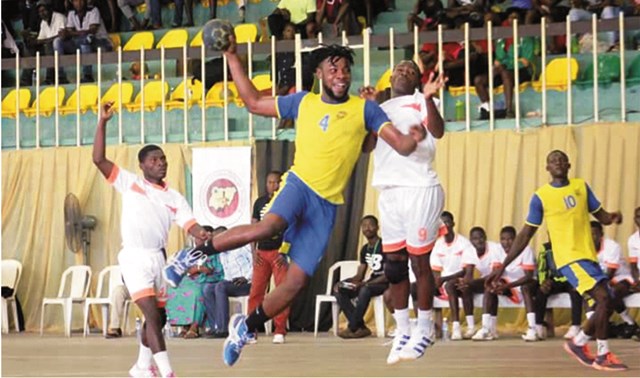 Some handball coaches on Saturday in Abuja commended the present board of the Handball Federation of Nigeria (HFN)  for organising competitions to enhance the development of the game in the country.
Bala Mohammed, the chief coach of the Federal Road safety Corps (FRSC) Handball Clubs said the federation under the leadership of Samuel Ocheho has done a great job by securing a sponsor for the premier league.
“We  have seen some tremendous changes. The present administration has secured sponsors for the league, which is the Prudent Energy and it has been working hard to bring back the lost glory of handball.
“I will like to commend the HFN President. He has done a wonderful work by  bringing some innovation into the game of handball in Nigeria,” he said.
Solomon Yola, the coach of Kano Pillars said even though the former HFN board organised competitiond, but its efforts could not be compared to that of the present administration.
“The previous administration did have a league but it was just for one season, and this present board has come up with this league and it’s now in the second edition.
“It’s very pleasant to everybody, from coaches to officials, players and the fans. We need consistency and this administration is just doing that.
“The federation’s technical department has been picking talented players from all competitions, and they are of very different ages from all categories,” he said.
Ibrahim Nabado, the coach of Niger Vipers said the present HFN administration, was doing well.
He added that it was unfortunate it did not receive financial support from the Federal Ministry of Youths and Sports Development.
“The present board is trying its best and it has done a lot, through the effort of securing external sponsors, the Prudent Energy company, and we are proud of its achievement.”
The coach added that the federation however choose a wrong time for this competition because of the Ramadan period.
“You should not expect anything too much from the players, because  most of them are fasting and the time for the matches is not really too conducive for players.
“You don’t expect someone to play matches at 11:30 p.m and go home starting to walk from one end of the stadium to their hostel because the organisers did not provide transportation to convey  players in the midnight.
“They will finish their games and go  to rest for just two to three hours and start fasting. Then they come back by 8 a.m. to start another game.
“It is very stressful for players and coaches.
“So, the federation’s board