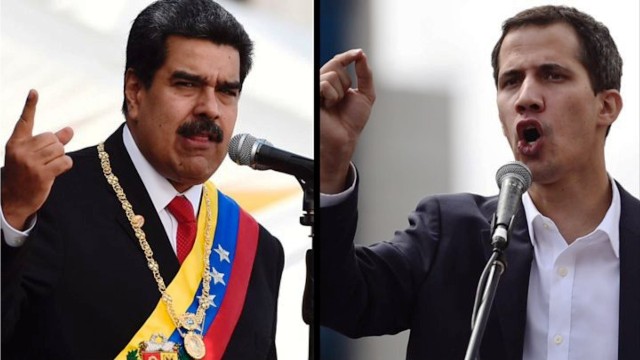 The crisis in Venezuela seems to be getting worse week by week following the disputed presidential elections held in May 2018 in which President Nicholas Maduro was re-elected.
Following the hues and cries, the national assembly become factionalised with the opposition controlled majority on the 10th of January 2019 recognising the parliamentary leader, Juan Guaido as the acting president of the country who eventually on the 23rd of January declared himself as the president of the country, a direct challenge to the incumbent president.
Why did this crisis start in the first place? According to political analysts, two major factors created this high level of political metability in venezuela a once prosperous and peaceful country. The first was the economic meltdown which began in 2010 under the presidency of the Late Hugo Chavez, and the non-compromising nature of the incumbent president Nicholas Maduro who the opposition claimed rigged the elections of 2014 and that of 2018. In addition to that, there are the allegations that apart from the rigging of the 2018 presidential elections, major opposition candidates were Prevented from running for offices.
As the political situation continues to deteriorate, the US, Bazil, Canada with some Latin American countries and some European Union countries have recognized Juan Guaido as President of venezuala while Russia,China, Cuba, Iran and their alised still recognise Nicholas Maduro as the legitimate president of the country.
As the tension continues to mount, some leading opposition figures have fled, some detained and attempts to factionalise the armed forces and the judiciary have so far failed and despite the sanctions imposed by the United States of America on venezuala, Maduro is still hanging on accusing the opposition for colluding with the American government for trying to overthrow his administration.
However, the opposition is not relenting in its effort to get rid of Maduro from office as the daily protest to oust him continues.
But what is quite worrisome is the unforeseen consequences of the action of the opposition. What if the protests turn violent and result in a civil war like that of Syria, which resulted in the destruction of over 40 per cent of the country’s infrastructure and displacement of millions of people. For now the scenario is relatively calm and hopefully the people of venezuela are more mature in their political outlook, that is both the opposition and members of the ruling party.
If Maduro were to be generally unpopular like Omar Al-Bashir of Sudan or Abdelaziz Bouteflika of Algeria he would have been removed from office long ago. In any case, every country is unique and what may work in country A, may not work out in Country B.
As the politicians lock horns for supremacy, one thing that they have tried to avoid with saner minds cautioning them is never to allow the country plunge into a civil war as dialogue and negotiations are always the best option in resolving issues. Otherwise, deadly armed merchants are waiting on the wings cash in whenever there is instability and the possibility of a civil war in any country.
The examples are many, that’s why even the United States of America is cautious in its approach to the crisis in Venezuela.
For a country to scide into such political crisis, several factors come into play such as personal ambition, the greed for power and foreign interest groups who might not like the politics of the incumbent in power or the possibility of creating chaos so that an individual or a politician who they believe will protect their interest will propped up to take over the reigns of government. So they are ever ready to use every means available to instigate crisis or cash on the existing crisis to achieve their aims by supporting a faction either through diplomatic support or financial inducement to bring about their desired change.
If people say that nobody benefits form chaos in the political life of any country, then we are still living in a fantasy world. Definitely, in every civil war, manufacturers of arms and ammunitions and providers of the necessary logistics and other accessories will hope to make sales and profit.
The economices of these countries will make improvements with job creation based on the increasing demands for their products and services. So one thing that should be paramount to the people of Veneuzuela is never to allow their country to become the next playground or battle field for any proxy war for merchants of death. They should learn from Libya, Somalia, Syria and Yemen.
They should also ask themselves why the western countries resolve their own political crisis without all these drama, bloodshed and the appeal for foreign support, whereas the reverse is the case for developing countries. It is only when we play into the hands of opportunists next target. Countries in Latin America have passed through violent revolutions after their independence from Spain and Portugal. They have also experienced brutal military dictatorships especially in the 20th century, and now that all of them are under democratic rule, there is no need or any of therebe it Venezuela to go book to the old path of bloodshed and war of attrition.
For any civil war to occur, it venezuala is only the people of venuzuela that will suffer the consequences and all what the United Nations will do is just to pass resolutions upon resolutions to end the conflict. Yemen is in a mess likewise Syria.
The future can still be better only if there is dialogue and trust.