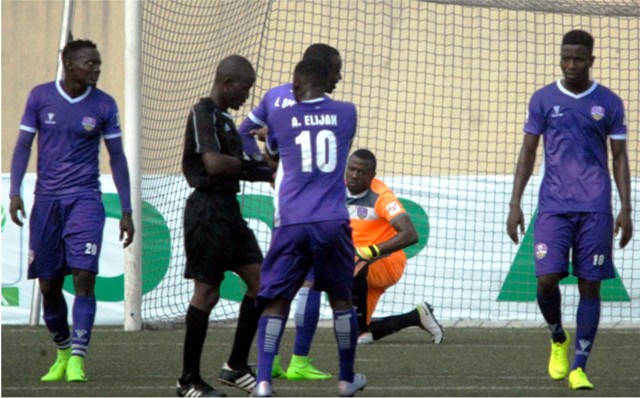 Nigeria Professional Football League (NPFL) side, Heartland FC are understood to be engrossed in huge debts to the tune of over N130m, Tidesports source reports.
The amount represents a balance of Imo State Governor, RochasOkorocha’s approvals for the club for the outgoing 2018/2019 NPFL abridged season, but which is yet to be made available to Heartland management.
It was further revealed that with hope the balance sum would be released to the club, Heartland officials went about borrowing money to conduct their preseason buildup as well as recruitment of players.
“Today is my saddest moment in the game,” Executive Chairman of Heartland FC, Chief Chibuzor Etuemena “Bash” stated when contacted by newsmen after visiting Abia Warriors defeated Heartland 4-2 in an NPFL matchday-19 clash at Okigwe Township Stadium.
“I could not imagine Heartland losing to Abia Warriors 4-2. It is too painful, so sad, in fact, I’m heart broken.
“I tried to find sleep but it refused to come. But how can I sleep? Nobody seems to understand what I’m passing through.
“It’s like we are pursuing a poisonous animal like snake with empty hands.
“Yes, we are engrossed in huge debts, I’m being inundated with demands for the settlement of debts we owe to clubs as regards players recruitment.
“This is because balance of the money approved for us this season has not been released to us.
“Yes, N130m, that’s the outstanding balance of amount we are expecting from the government for this season. But it has not been made available.
“But we had to go ahead with the season. I had to borrow to keep things moving, hoping the balance of the money would be released,” he said.
Heartland are in a fierce race against relegation but the 4-2 defeat to Abia Warriors in a matchday-19 clash last Sunday has further dragged the club deeper into relegation worries.
And Chief Etuemena, who is also called ‘Digital Chairman’ lamented bitterly on the possible consequences of the unreleased funds on the club.
“That’s where the problem is. With the way things are going, how will I settle our debts?,” he moaned.