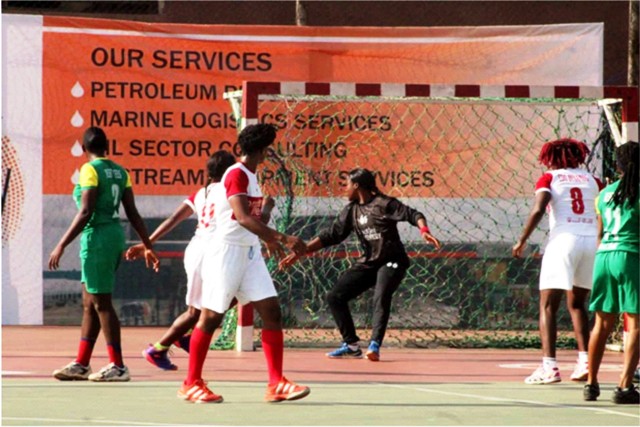 Plateau Peacocks female handball club of Jos yesterday drew 18-18 with Edo Dynamos of Benin at the ongoing Prudent Energy Handball Premier League in Abuja.
Tidesports source reports that both teams gave a good account of themselves from the beginning till the end of the game.
They were locked at 6-6 by the end of the first half, but both sides scored 12 goals each in the second half.
Speaking on their performance, coach Aaron Okojie of Edo Dynamos said his team played against a tough team as the Plateau Peacocks were the league’s defending champions.
“They are alongside our team, one of the two best teams in the female category, and we gave them a tough time because my players were not ready to lose their first match in the league.
“Our opponents gave their best, but they were unable to defeat us.
“We will now rest and get prepared for our next game tomorrow against Desert Queens of Katsina, which must end with a win in our favour,” he said.
On his part, the coach of Plateau Peacocks, Yussuf Abdukareem, said his players performed well but could not defeat their opponents.
“Everybody came here fully prepared for this competition. If we cannot win our first match, that means the competition has transcended to a greater level.
“However, we will work hard to win our remaining games because we came here to defend our title. We are playing against the Defenders Babes tomorrow (Wednesday) and we must beat them,” he said.
Tidesports source reports that in the first game of the competition which got underway yesterday, Imo Grasshoppers of Owerri beat Owena Queens of Akure 39-11 in the female competition.
Twelve male and 10 female teams are participating in the first phase of the second edition of Prudent Energy Handball Premier League being organised by the Handball Federation of Nigeria (HFN).
The competition, holding at the Velodrome of the Abuja National Stadium in Abuja, will hold daily till May 25, except on May 20 when all clubs would have a free day.
Eleven matches will be played daily till Saturday, while Sunday will have eight matches, Monday nine matches and May 22, six matches.
May 23 to May 25 will also have 11 matches daily.
Matches will begin at 7 a.m. and end after 11 p.m., with the daily schedule having a break between 11 a.m. and 7 p.m.