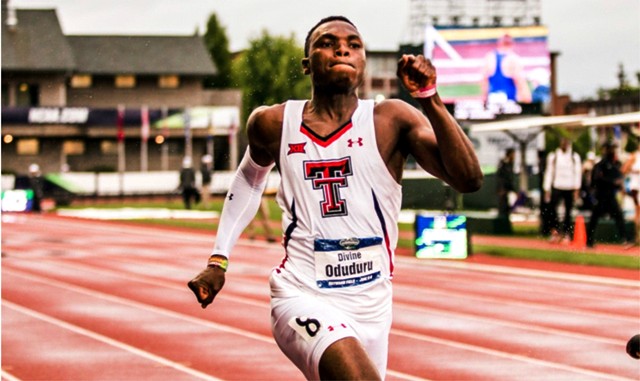 AFN board member and athletics Coach, Olalekan Soetan, has lauded Nigerian male sprint sensation, Divine Oduduru, a 100m athlete for his excellent performance at the Micheal Johnson Invitational meet in Texas.
Divine ran 9.94 in the 100 metres and less than an hour after; he ran 19.76 seconds for 200 metres, the fastest time in the world this year and a national record.
Soetan, speaking to Tidesports source stated that he expects Oduduru to make the podium at the 2020 Olympics next year in Tokyo, even as they had been expecting him to run a sub 10 for some time now.
“Divine Oduduru was a world junior champion, silver medalist in 200 meters, 2014”.
“He moved from junior national athlete to continental, recently African champion was silver medalist for Nigeria”.
“Moved to the USA two years ago, so he has been training hard and we have been expecting it”.
“This year, he did a 6’5, ran indoors 6’6 and anybody who does that will run a sub 10 and he has done it, we have been expecting it, that has been the best any Nigerian has done since Fasuba in the last 13 years with 9.84 African records”.
“If you recall, he did 9.94 remarkably, 45 minutes later, he 19.76 in the 200 meters…If you recall, Usain Bolt won 200 in Brazil with 19.8, that simply means that Divine is a world class athlete and podium prospect come Tokyo 2020”.