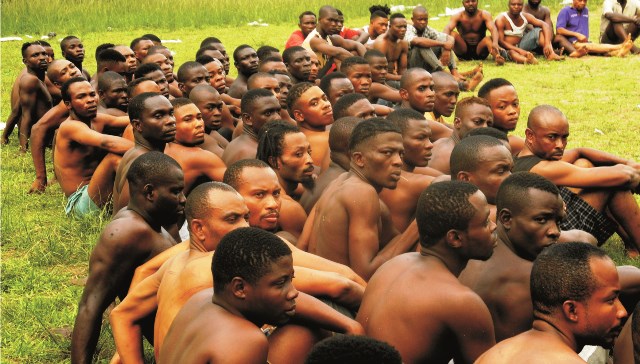 Three persons have been killed in Egbeda community in Emohua Local Government Area of Rivers State over cult rivalry.
An eyewitness, who spoke with The Tide in Port Harcourt at the weekend under a condition of anonymity, said two persons were killed when Iceland cult fraternity shot sporadically at a Toyota Camry Car travelling from Elele to Ubimini through Egbeda.
He said the shot at the car deflated the vehicle’s tyres, where upon two of the occupants suspected to be members of the rival Deygbam cult group were dragged out of the vehicle and shot dead.
The eyewitness noted that the peace keeping group known as Bakassi intervened to stop the killing but a member of the group was felled by Icelanders’ bullet making three persons on the whole.
He said following the killings, many members of the community have fled their homes following the clashes between the groups.
The eyewitness noted both Bakassi and Deygbam confraternity said the would be on the offensive to avenge the death of their members.
The eyewitness also stated that the commander of the Bakassi group had assured that they would not leave any stone unturned until the perpetrators of the mayhem were caught.
He said many indigenes of the community had started leaving in their droves to neighbouring villages.
He said the clash between the two groups would be very bloody as they were squaring up for a showdown.
The eyewitness, who is also a member of the community urged all to maintain peace for the development of the area.
The Rivers State Police Public Relations Officer, Mr. Nnamdi Omow (DSP) when contacted on Saturday said they were not aware of the killings.

Judiciary As Last Hope Of The Common Man

The judiciary is said to be the last hope of the common man. If there is no judiciary or where the judiciary is shut, the hope of the common man is dashed. If the saying is anything to go by, one is shocked that for nearly two months, the last bastion of hope of the masses was shut by striking workers, yet it has been business as usual. Both the government and the workers union are not bothered about the ugly situation.
Judiciary Staff Union of Nigeria (JUSUN) is on indefinite strike nationwide to protest the inability of both the federal and some state governments to grant financial autonomy to the judiciary. The independence of the judiciary is contained in Nigeria’s grundnorm, the Constitution of the Federal Republic of Nigeria 1999 as amended.  Just as the positions of President and Governors of states are creations of the constitution, so also is the independence of the judiciary.
The truth of the matter is that JUSUN does not need to go on strike before the two tiers of government can implement the financial autonomy of the judiciary. It is a constitutional provision and political office holders swore to implement the spirit and letters of the Constitution.
Indeed, the judiciary and legislature are supposed to be independent as provided in the Constitution. When the three arms of government are independent, separation of powers is assured. This is because it will prevent fusion of powers which leads to tyranny. Fusion of powers smacks of dictatorship. In many states of the federation, governors have become absolute rulers.
It is becoming common that some state governors find it easy to shut the judiciary in order to have their way when unfavourable conditions tend to persist in their states.
For eight months, Rt. Hon. ChibuikeAmaechi shut the judiciary following an indefinite strike embarked upon by JUSUN. The closure of the courts caused a lot of hardship for both practising lawyers and litigants. Some lawyers who could not make ends meet died as a result. Litigants suffered lack of access to justice.
The indefinite strike embarked upon by JUSUN to demand financial autonomy is commendable because of its insistence on propriety obviously intended to prevent state chief executives from ruling on their whims and caprices.
But pathetically, many governors are unwilling to allow an independent judiciary that they will no longer hoodwink or coerce to do their biddings.  The delay in implementing the autonomy is predicated on the fact that most of our leaders are bigger than the country’s institutions.
Hence, we have strong leaders and weak institutions. At the federal and state levels, the suppression of the country’s main institution has aided tyranny.
Consequently, the governors and even the president can afford to do anything unconstitutional and go scot-free with it.
The national and some state Houses of Assembly have become rubber stamps ready for the masters’ use anytime. Therefore, one hardly finds meaningful debates in the legislature except in states that have strong opposition. In the states, where all the members of the legislature come from the ruling party, meaningful debate is moonshine.
The fashionable term is “Carry go”. The term “Carry go” literally means treat as requested. There is obviously no alteration or modification. The application of “Carry go” has continued to worsen the state of our democracy. The governors or the president can afford to do anything he likes without any compunction. Consequently, the masses and indeed the electorate do not have a voice anymore. The voices of the electorate are lost in the legislators’ inefficiency and cowardice.
The country is worse for it. What we have in most states of the skewed Nigerian federation are monarchs, who brook no challenges. They rule howsoever they like, for themselves and their various families. They have goons all over their states whose duty it is to defend them. If not for the state of our nation where rust is ripeness, do the President and Governors have no choice in implementing the constitution?
Many state chief executives implement and execute projects that would facilitate corruption yet any project that would better the lot of the people is either treated with levity or left undone. The question that readily comes to the mind is: whose interest are the leaders working for? Is it for themselves or the populace?

Elele Security Planning and Advisory Committee has appealed to the state government to come to their aid.
The local vigilante often called ESPAC said the call became imperative following its key role in sustaining peace in the communities.
In a chat with newsmen in his office yesterday, the commander, Daniel Wosa disclosed the unbearable situation his men faced on daily basis without anything to take home.
Wosa said some of his men had threatened to quit the voluntary job since nobody appreciated them.
The commander expressed regret that ESPAC members had volunteered to sacrifice their lives for the society yet nobody appreciated them.
“Some struggle to feed their families. It is unfair …”
“We appeal to governor Nyesom Wike to consider us because of the key role we have been playing in Rivers state.
“Today communities,road users and business men can attest to our untiring effort since we came on board.”
“No more kidnapping, killing and other vices which threatened the peace of the land,” he noted.
“Boys under me who volunteered to sacrifice for the wellbeing of others need recognition,” he stated.
Wosa said there was no security challenge the group could not contend if only government could give them support.
He specifically commended the executive Chairman, Ikwerre Local Government Area, Hon Samuel Nwanosike for his assistance and said if not Ikwerre Council boss the situation would have degenerated.
Wosa said some time now he had been using his hard-earned money to appease his men.
Wosa said it was on record Elele OSPAC had never been found wanting in the cause of its duty and explained that the group worked in collaboration with the conventional police to achieve desired objective
Meanwhile,a youth leader in Ikwerre Local Government, Comrade Eleonu Chukwuka says Hon Samuel Nwanosike’ s achievement in security has given him the second term ticket.
Comrd Chukwuka said Ikwerre Council Boss had written his name in gold by surmounting the security situation in Ikwerre.
The youth leader while chatting with newsmen said the introduction of OSPAC by Nwanosike led to other infrastructural and human capital development and pointed out that peace was key to development.
It is a thing of joy that farmers can return to farm. Normal life has returned.

It is the greatest achievement which snowballed to what we are seeing today in Ikwerre.

Ikwerre people are proud of him and will back till eternity.

By: Sylvester Udemezue with reports from King Onunwor