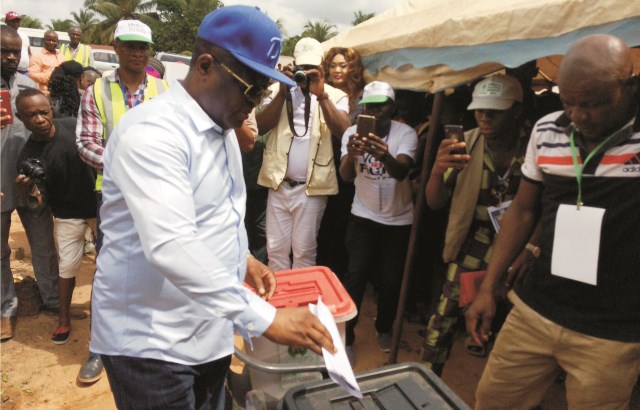 Mr Austin Oruoye of the Peoples Democratic Party (PDP) has emerged winner of the Warri South Constituency I in the Saturday Delta House of Assembly election.
The Returning Officer (RO) in Warri South Constituency I, Dr Theophilus Ehimien, announced the result yesterday in Warri.
Ehimien said Oruoye scored a total votes of 20, 903 to defeat Mr Stanley Emiko of the All Progressives Congress (APC), who polled 6,169 votes.
“Mr Austin Oruoye, having met the requirements of the law and scored the highest number of votes, is hereby declared winner of the Warri South Constituency I House of Assembly Election,” he said.
Responding, Oruoye attributed his victory to God, thanking the electorate for believing in him.
“I thanked the people for deeming it fit to make me take up this responsibility, and I want to assure them that I will do all I can to satisfy them.
“It is a contest of no winner, no loser; we are together in governance. I cannot do it alone.
“I appeal to other contestants to join me to enable our people in the constituency to enjoy the service of good governance,” Oruoye said.
Also, the Chairman, Warri South, Mr Michael Tidi, thanked the people for voting en masse for the PDP candidate.
“The victory is an attestation of the acceptability of the policies and programmes of the PDP in Delta,” Tidi said.
He advised Oruoye to reach out, sponsor and promote people-oriented Bills that would bring about good governance to the Constituency and Delta in general.
Commenting, Dr David Akoma urged Oruoye to remember the electorate, noting that people that voted him in could also vote him out.
“He should know that if he does not make people happy, the Permanent Voters Card that voted him in will also be used against him in subsequent elections,” Akoma said.
Earlier, Mr Mathew Opuoru of the PDP had been announced as the winner of the Warri South Constituency II. Dr Stella Omonigho, the Returning Officer for Warri South Constituency II, said Opuoru polled a total votes of 6,769 to defeat his closed rival, Mike Okumagba of the APC who scored a total of 4,853 votes.
Meanwhile, PDP polled 34,977 votes in the governorship election in Warri South Local Government Area, while APC scored a total of 12, 982 votes.
The Returning Officer, Ehimien, said Warri South had a total registered voters of 173, 668.
He said that the total votes cast was 50,918, while the valid and rejected votes were 49, 393 and 1,525 respectively.