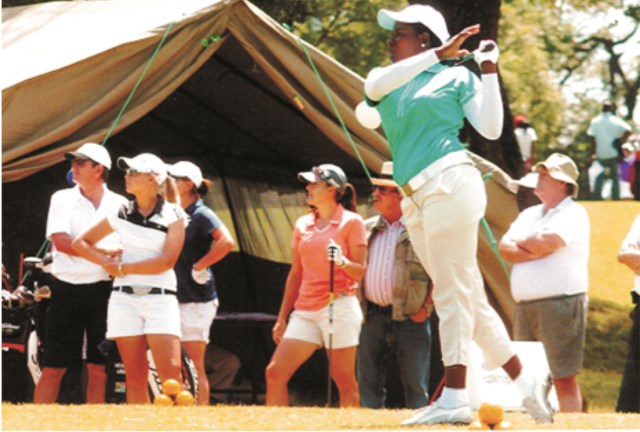 Chairperson of the 21st IBB Ladies Golf Championship, Maryrose Richard-Obioha, on Wednesday said no fewer than 260 participants would compete for honours at this year’s edition of the tournament.
Tidesports source reports that the championship holding at the IBB Golf and Country Club in Abuja would feature players from six African and one European countries.
The countries are Ghana, Uganda, Mozambique, Zimbabwe, Kenya and Sweden, as well as hosts Nigeria.
Richard-Obioha, who disclosed this at a news conference held at the club, said the event would be a three-day gross tournament and would tee off today and end on Sunday.
“So far we have no fewer than 160 lady golfers who have registered for the championship with 120 of them within the 0 to 28 handicap level.
“We also expect our men to participate as well as our foreign players. So, on the whole we have no fewer than 260 players taking part in the championship.
“We will be having a ceremonial tee-off on Thursday (yesterday), and the Minister of Youths and Sports Development, Solomon Dalung, will be the guest of honour at the event,” she said.
Richard-Obioha explained that the competition will have Friday and Saturday as qualifying days, “and at the end of day two, there will be a cut”.
“A total of 45 players are expected to make the cut and they will proceed to the final where the champion is expected to emerge on Sunday,” she added.
The official further said the main event of the championship was for lady amateur golfers within handicap 0 to 28, with players of other handicap levels participating in other draws.
“Lady golfers within the 0 to 28 handicap credit will qualify to participate in the main draw/event.
“The Ladies Open is also listed on the World Amateur Golf (WAG) ranking calendar and the golfers will be playing to improve their ranks.
“At the end of the championship, the scores of the players will be collated and sent to WAG.
“They will be analysed and the players will be ranked according to their performance level,” she said.
Speaking also, the Lady Captain of IBB Golf and Country Club, Julie Acholonu, said the championship promises to be exciting and very competitive.
“Players of the host golf club have been working very hard to ensure that the title of the main event and other major honours are won by the home players.”
She disclosed that there were several prizes to be won and that there were about 10 gross prizes available.
“We also have guest prizes for those between handicap 29 to 36 as well as nett and sponsors prizes.
“By the grace of God, at least one Nigerian player will be on the WAG rankings this year,” Acholonu said.
She thanked the sponsors of the event for their support, noting that without them the championship would not have taken place.
“We use this opportunity to appreciate the NNPC, who are our major sponsors, for the continued support we have enjoyed over the years.
“We also thank our other sponsors who have ensured that the championship has continued to grow from strength to strength,” the lady captain said.
The Chairperson, Media and Publicity for the championship, Olu Usim-Wilson, thanked the event’s Organising Committee for preparations made so far.

‘Clamping Down On Violence In NPFL, A Difficult Task’

2019 Will Be Eventful For Handball, Chairman Assures