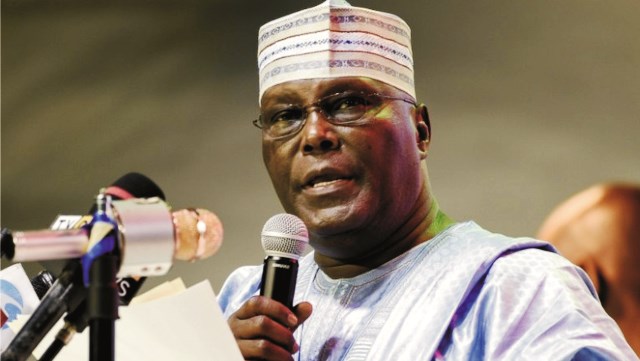 The presidential candidate of the Peoples Democratic Party (PDP), Alhaji Atiku Abubakar, has pledged the completion of the Second Niger Bridge and the resuscitation of the three seaports in Delta State, if elected.
He made the pledge in his address to the people of Delta State during the PDP presidential rally, yesterday, at the Stephen Keshi Stadium in Asaba, the state capital.
Atiku said, “I want to commend the good people of Delta State for their loyalty to PDP over the years.
“I have come here today to seek your mandate in my quest to serve our great country Nigeria.
“Let me assure you that if you elect me as your president, I will do three major things for the people of this state.
“First and foremost, I will ensure the resuscitation of the three seaports in Delta State that have been left dead over the years.
“Secondly, I will complete all abandoned Federal Government projects in the state.
“Thirdly, my administration will ensure urgent completion of the second Niger Bridge that the present government is playing with.
“I urge the people to vote for the PDP.”
The National Chairman of PDP, Prince Uche Scondus, also urged the people of Delta State to ensure they have their voter cards.
He appealed to the people to go out on Election Day and vote the PDP at all levels “for a progressive Nigeria.
“I want you all to make sure you have your voter cards because that is the only way you can effect the change we all need.
“I urge you to vote for the PDP at all levels, that is the only way we can effect the change we all need for our nation to move forward.”
Secondus called on the Independent National Electoral Commission to be above-board in the conduct of the elections.
In his remarks, the Director-General of the PDP Presidential Campaign Organisation, Dr Bukola Saraki, also urged the people to vote for PDP.
“The most important thing to us as a people is that we are seeing the future, a future which the PDP will bring peace to our entire country; we are prepared for the elections and from the crowd we have today, you (Alhaji Abubakar) will be encouraged to know that Deltans will vote PDP in large numbers, and we will defend our votes,” the governor said.
Director-General of the Campaign Organisation, Senator Bukola Saraki, who danced to the admiration of the people, congratulated Governor Okowa for his developmental efforts, especially, for constructing the Stephen Keshi Stadium, noting that the governor “understands the act of governance.”
Saraki who is the President of the Senate said it was important for Nigerians to vote for Alhaji Abubakar because, such will boost the confidence of investors, boost the economy and create job opportunities for the people.
“Investors do not go to countries where there is no rule of law, countries where security of lives and property is not guaranteed; don’t waste your votes for the APC, don’t be afraid, we will monitor the votes so that they cannot rig, a vote for Alhaji Abubakar is a vote to boost our economy, provide jobs for our people; vote for the PDP,” Senator Saraki said while the National Chairman of the party, Prince Uche Secondus warned that any attempt to rig the elections would be resisted and spell doom for the country.
“We are aware that there are patriotic Nigerians in INEC, if the election is rigged, there will be war because, everybody is ready for the elections; the security agencies should obey the constitution and be neutral or else, there will be crisis,” Prince Secondus said, adding, “Nigerians should come out and vote and defend their votes because, the votes must count so that we can vote out someone who has brought disgrace to the nation.”
He continued, “we need digital President and Atiku is that digital President; Alhaji Abubakar can interact and engage the youths, he will be in charge and the government would not be in the hands of cabals.”
Others who spoke at the rally include, Chief Benjamin Elue, Prof. Sam Oyovbaire, and Senator Stella Omu.