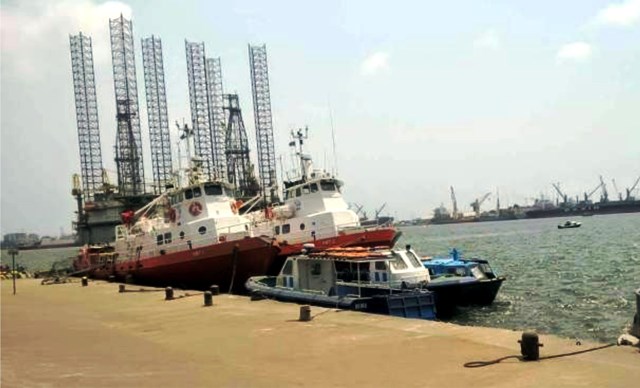 Despite the unabated traffic and the delay experienced at the Apapa and Tin Can Ports, Nigerian importers still prefer Apapa ports to the Eastern ports, citing over charges and insecurity as reasons
This is as shallow draft and high charges have been attributed to reasons why the Eastern ports have continually failed to attract vessels for years, according to investigations
The eastern ports  which are located in the South South region include Calabar Port, Delta Port, Rivers Port at Port Harcourt, and Onne Port at Eleme have witnessed low patronage of vessels in recent years.
Recall that some importers weeks ago appealed to the Federal Government to open up the seaports in the eastern flank of the country to decongest ports in Lagos.
The importers argued that the designation of the Calabar, Port Harcourt and Warri ports for cargo transaction would bring the perennial traffic at the Apapa Port to an end.
But the traders in Lagos State and its environs said that they were experiencing hardships in getting their goods out of the Apapa Port.
Investigation over the weekend showed that while high situation is causing shallow draft at the Calabar Port and making it inaccessible to vessels, operations at  the Port Harcourt Port are slowed down by constant pirate attacks and sea robbery that have made the port unpopular for foreign ship owners.
Also, shipping experts have argued that for the eastern ports to attract cargoes and to be an international standard maritime destination, they must attract huge vessels like the Very Large Crude Carriers (VLCC) and the Ultra Large Crude Carriers (ULCC).
But that can only be achieved by a deeper channel of at least 13 meters because smaller vessel would not reduce port cost.
With the shallow draught, there is a limit to the size of vessels the Calabar Port can accommodate and shipping, especially container shipping, is all about economies of scale. The larger vessels that call, the lower the cost of importing and exporting, and the lower the freight cost.
While the Calabar Port suffers from shallow draught, the Onne Port is combating insecurity such as pirate attacks and sea-robbery.
Due to pirate attacks, vessels entering Nigeria’s Onne Port are delayed for an average of six hours per night which amount to $45,000 (N16.2milion).
The delay, estimated at $7,500 per hour, is said to be fuelled by constant pirate attacks on the axis. Consequently, the importers of the consignments on board the vessel will have to pay for the delay.
The eastern ports including the Onne Port have been operating on the International Ships Ports Security (ISPS) Code 2 due to insecurity in the region as vessels that berth and discharge find it difficult to sail out at night for fear of pirate attacks.
Corroborating this, Acting Director-General of the Infrastructure Concession Regulatory Commission (ICRC), Engr Chidi Izuwah in a statement available to The Tide, expressed worry over the inability of vessels to sail out at night at Onne Port.
Izuwah regretted that vessels cannot sail out of the port as it is done in Lagos port.
“No night sailing at Onne Port and this is worrisome unlike what happens at Lagos Port where vessels can sail out at any time of the day,” he said.
Also an official in one of the container terminals at Onne Port, West Africa Container Terminal (WACT) exclusively told The Tide that vessels failed to sail out of the port at night for fear of pirate attacks.
The source said: “Night voyage is absolutely prohibited at Onne Port due to insecurity fuelled by pirate attacks.
“As a shipping company, you choose between your vessel being attacked and crew abducted and you staying over and incurring demurrage”.
Also speaking a shipping expert, Dr Kofi Mbia, warned that the surge in pirate activities could have a wrong impact on commercial trading in the shipping industry as it would affect the climate of confidence in trade and influence the rise in insurance premiums.
Mbia, a former chief executive officer of the Ghana Shippers’ Authority (GSA) warned of high insurance premiums over high pirate attacks.
“When your coast is infested with pirates then there is the tendency for insurance premiums to go up for vessels that are calling at your port because of the threat to the vessels and at the same time it affects the climate of confidence in trade”, he said.

The National President of the Association of Nigerian Licensed Customs Agents (ANLCA), Hon. Tony Iju Nwabunike, has advised governments at all levels to engage youths in coastal communities to support security operatives in the fight against sea robbery and other crimes along the inland waterways.
Nwabunike made the call last Friday while presenting a paper at the 8th Nigeria Annual Transport Lecture organised by Transport Day Newspapers, in Lagos.
In the paper tagged “Blue Economy: Pathway For Nigeria’s Economic Diversification”, the ANLCA boss reiterated the need to engage youths in coastal communities in the fight against piracy and other crimes on the waterways.
According to him, “Government should, as a matter of policy, involve youths of coastal communities in a kind of Civilian Task Force to support the Navy and other security agencies in nipping our maritime insecurity in the bud”.
Nwabunike noted that the nation’s maritime domain was insecure due to inadequate security platforms like patrol boats, aircrafts and supporting technology gadgets, as well as lesser number of personnel to implement or enforce adherence to security on waterways.
According to him, maritime piracy, sea robbery, oil theft, kidnapping on waters have been copiously recorded in the domain that should naturally contribute to the nation’s economic well-being.
“I am almost tempted to say that our Exclusive Economic Zone (EEZ) is no longer exclusive to us because the people I choose to call maritime bandits are threatening our space.
“I am aware that the Federal Government through the Nigerian Maritime Administration and Safety Agency is rising to the occasion with planned deployment of advanced security assets to energise our blue economy. I believe it will work if consciously sustained. This they tagged the ‘Deep Blue Project’.
“It is anticipated that this move will go a long way in fighting piracy and other maritime crimes in the Gulf of Guinea and our country’s entire territorial waters”, he said.
The ANLCA President pointed out that safety of vessels, cargoes and crews on the maritime space  have direct impacts on the overall economy since the maritime sector is critical in the areas of trade, investment, employment and recreation.
He affirmed that the 853km Nigeria coastline runs through seven southern states of Lagos, Ondo, Delta, Bayelsa, Rivers, Akwa Ibom and Cross Rivers bordering the Atlantic Ocean, adding that these are aside other states that are linked by inland waters for copious socio-cultural and commercial activities.
While urging the government to look beyond oil and gas to sustain the economy, Nwabunike said that the Nigerian maritime industry, being the nation’s second highest revenue earner, has the potential of cushioning the temporary effects of inadequate oil revenue.

No fewer than five seafarers have been kidnapped by suspected sea pirates in the Gulf of Guinea onboard a sea vessel.
The pirates attacked a vessel code name F/V ATLANTIC PRINCESS with IMO number 8124412 at 65 nautical miles in South Tema, Ghana.
This was contained in a travel advisory issued by an international agency, Dryad Global, at the weekend.
The vessel was understood to have been approached by one speedboat with eight pirates onboard. The vessel was reportedly fired upon prior to being boarded by five armed men. It was later hijacked and sailed south to a distance of 100 nautical miles before pirates departed the vessel, the agency said.
Among the abducted seafarers are three Chinese, one Russian and one Korean.
Dryad Global said, “This latest attack ends a significant hiatus of activity within the Gulf of Guinea. This latest attack is the first kidnapping incident since 15th March, 2021. Thus far within 2021, there have been 56 personnel kidnapped across five incidents from vessels operating within the Gulf of Guinea.
“This latest incident represents the furthest westerly kidnapping within the Gulf of Guinea to date. Trends across the past 18 months have indicated a broadening of the piratical footprint within the Gulf of Guinea, beyond the traditional heartland of the Nigerian Exclusive Economic Zone (EEZ)”.
The agency went further to say that “Reports from crew members indicate that two hours prior to the attack, a rusted looking mini tanker vessel was sighted far off the horizon with the AIS off. The vessel is understood to have manoeuvred away from the suspicious tanker.
“Further but unverifiable reporting indicates that the crew had identified the pirates as Nigerians. Given the significant distance of the incident from Nigerian waters, it remains a realistic possibility that the vessel sighted by the crew was being used as a mothership from which to launch and sustain deep offshore operations”.
Recall that the assets acquisition and installation phase of Nigeria’s Deep Blue Project moved towards completion with the delivery of one of the two special mission aircrafts for the project.
The Cessna CJ3 Citation jet for maritime surveillance was received in Lagos ahead of the scheduled launch of the Integrated National Security and Waterways Protection Infrastructure, commonly called the Deep Blue Project, on May 21.

The Chief of Naval Staff, Admiral Awwal Gambo, says the nation’s security challenges now require more actions and less talk from the security agencies.
The Naval Chief stated this during a visit by the Accountant-General of the Federation (AGF), Ahmed Idris, to the Defence Headquarters, recently.
In a statement signed by the Director, Information, Press and Public Relations to the AGF, Henshaw Ogubike, the Chief of Naval Staff was quoted as saying that the security challenges in the country were not insurmountable, but required more action, less talk.
The AGF, in his remarks, acknowledged the enormous responsibility saddled with the Nigerian Navy and other Armed Forces, and assured them of the continuous support of the federal treasury.
According to him, the nation’s treasury will ensure timely release of funds to the Armed Forces to enable them secure the country’s territorial waters and sovereignty.
“The Nigerian Navy and other Armed Forces have kept the country one in terms of discharge of their duties. Your responsibility is enormous, you need every support.
“We will continue to support you by giving you the necessary tools for you to deliver”, he assured.
Idris congratulated the Naval Chief on his recent appointment and stressed that no effort would be spared to sustain the cordial relationship that is existing between the Nigeria Armed Forces and the federal treasury.