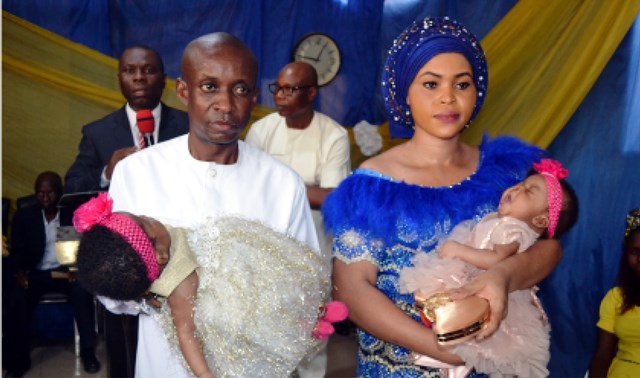 The Pastor incharge of Seventh-Day Adventist Church, Rumuolumeni District, Port Harcourt, Rivers State, Pastor Vitalis Edozie has said that negligence on the part of parents in training their children leads to negative attitudes exhibited by the youth in the society.
Pastor Edozie stated this during the dedication of twin babies, little Miss Fortunate Chidinma Chimezie and Divine Chioma Chimezie held at the Seventh-Day Adventist Church, Akar in Port Harcourt, over the weekend.
Speaking at the dedication service, the man of God who described children as unique and precious gift from God said they should be given adequate care and attention.
He urged the parents of the children to take full responsibilities to ensure that they train them properly in the fear of the Lord so that when they grow of age, they would not depart from such training.
According to him, there is no duty greater than proper upbringing of children. He urged parents not to sleep on their duties and responsibilities in training and monitoring their children at all times.
His words: “Parents’ important duty is to train their children properly. They should not take part in destroying the assets God has given them to care for and when they are properly trained, they will in turn become a blessing to the parents as well as humanity in general”.
The Pastor, who took his dedication text from the book of Genesis 33:5, urged the church to assist the family in both spiritual and social upbringing of the twins, adding that training of children should not be left in the hands of their biological parents alone but it should be a collective responsibility.
Earlier, the father of the children, Hon (Deacon) Chimezie Ogbu, who is also the Supervisory Councilor for Health, Etche Local Government Area, used the opportunity to express the family’s gratitude to God for giving them the children and saving the life of his wife during the child delivery.
He promised to take good care of them and bring them up properly in the fear of God.