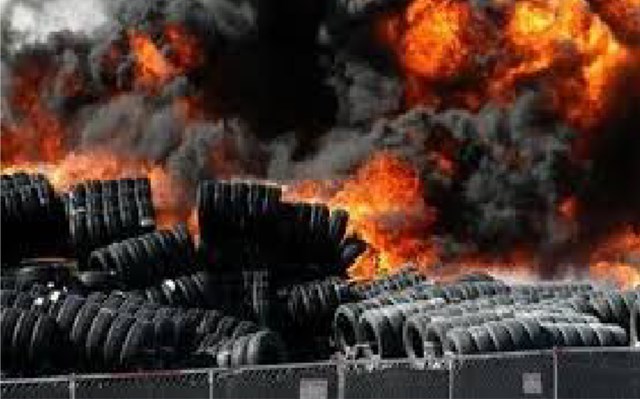 The burning of tyres in villages, towns and cities across Nigeria especially at every New Year eve, is becoming popular among young Nigerians and some adults.
Investigation has revealed that some of those who indulge in it, see it as a way of welcoming the new year, while for others it is just for fun.
Aside from those who burn tyres at every new year eve, there are still some who do it for commercial reasons, which include extracting wires with the view of selling them for money.
Similarly, in most abattoirs in the country tyres are used for curing animal skin.
It would be recalled that last year, the tyre dump at the Port Harcourt flyover was set ablaze by some unknown persons.
Meanwhile, some environmentalists and members of the civil society have described the act as unfriendly to both the environment and human health.
A cross section of respondents who spoke on the issue said that burning of tyres add to the depletion of the ozone layer.
They also said that the situation is not health friendly as the consumption of meat roasted with tyres and inhaling of fumes from burnt tyres can cause series of health challenges.
A medical doctor at the University of Port Harcourt Teaching Hospital (UPTH) who spoke under condition of anonymity said that the situation is also adding to the black soot situation.
He said that the odour is offensive especially within the environment, where the tyres are being burnt.
The medical practitioners stressed the need for those working in abattoirs to evolve a better means of preparing their meat, while the government should evolve measures to check the incessant burning of tyres.
Also speaking, the programme manager, Centre for Environment Human Rights and Development (CEHRD) Mr. Steven Obodoekwe said that time has come for policies that will check the incessant burning of tyres by some members of the society. Mr Obodoekwe also described as senseless, the incessant burning of tyres on every new year eve.
According to him, “I don’t really know why people take delight in burning tyres on new year eves, saying they are burning the old year away.
“They don’t have the time to pause and consider the implications of their actions to the environment and health of the populace.”
He further said that burning of tyres add dangerous substances to the environment that are harmful to human existence.
“When tyres are burnt, some amounts of dangerous hydrocarbon are released into the atmosphere. This adds to pollution of the environment.
Obodoekwe also added that the situation was one of the causes of the black soot.
Also speaking, a former president of the Nigerian Environmental Society, (NES) Mr. Olu Ndi Ogosu described the situation as dangerous to the environment stressing that it is partly responsible for the present environmental problems facing Rivers State and the entire Niger Delta.
He stressed the need for actions on the path of the authority to checkmate the problem.
On his part Prince William Chinwo, an Environmentalist, who condemned the act stressed the need for the government to set up a recycling plant for disused tyres.
“The tyres can be used for craft works such as boat padding, water proof rapt and craft construction, shoe soles, rain boots and rubber hoe designs. Chinwo said that, tyres can be used for the construction of upholstery seat stands knee elbow and protecting pads for safety wares, robber losing among others.
He said that the society is loses millions of naira through the burning of tyres.
Also speaking, Mr. Belema Nyeduko said that proper management of disused tyres can create employment appointments for thousands of unemployed youths in the society.
He stressed the need for the government to ensure proper safeguard of the tyre dump at the Port Harcourt Flyover to ensure that it is not set ablaze by hoodlums again.
Other respondents expressed similar sentiment over the issue in line with expert advise, it is hoped that both the Federal and State Government will come up with legislations to check the trend and save the environment from further pollution.