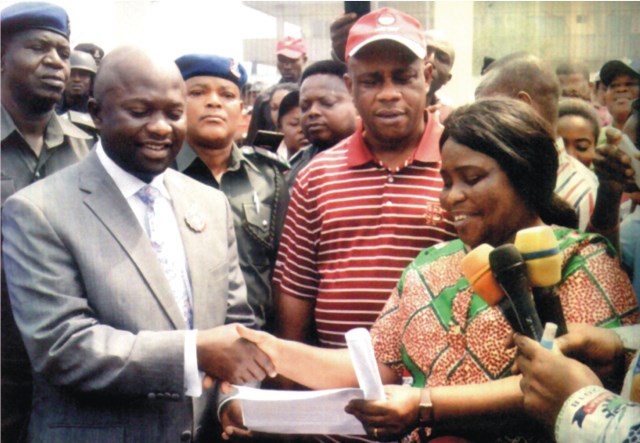 The Nigeria Labour Congress (NLC), Edo chapter, says it will boycott the 2019 general elections if the N30, 000 minimum wage bill was not transmitted to the National Assembly by President Muhammadu Buhari.
Chairman, Edo NLC, Mr Emmanuel Ademokun, said yesterday in Benin, when he led a protest march to Government House, to press for the payment of the new minimum wage.
Ademokun said Nigerian workers were the least paid in the world, noting that, “it must be N30,000 minimum wage on or before election or no election.”
”We are here to express our grievances over the non-transmission of the N30,000 minimum wage to the National Assembly, because we are aware that the bill has been presented to the president.
”Workers must decide who will govern them,” he said.
He said the union had no issue with Edo Government, as regards workers welfare, noting that the state governor , Mr Godwin Obaseki, had promised to pay the N30, 000 amount, when passed into law.
The Tide reports that Ademokun presented a copy of the union’s notice of impending strike to Obaseki.
Responding, Obaseki reassured them of his administration’s readiness to pay whatever amount was passed into law.
The governor, who was represented by the Head of Service, Mr Isaac Ehiozuwa, said Edo was “workers’ friendly.”
He said  that the state had gone ahead to pay N25,000 minimum wage, when other states were still paying N18,000.
”The NLC chairman has said it all. The state is labour friendly, and we will implement whatever is passed into law by the National Assembly.”