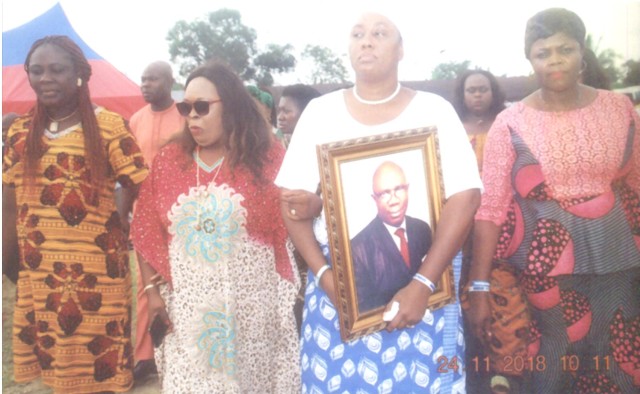 Pastor Augustine Nwikinaka, a Former Chief Press Secretary to Former Rivers State Governor, Dr Peter Odili was laid to rest last Saturday in his home-town, Kpean in Khana Local Government Area of Rivers State.
The burial was preceded by a solemn funeral service at the State Primary School Field, Kpean where journalists, clerics, top politicians and community  leaders paid their last respects.
The funeral service which  was organised by the Salvation Ministries where Pastor Nwikinaka served until his death witnessed  the rendition of solemn hymns by the Christian faithful.
In different tributes, speakers extolled the qualities of Late Pastor Augustine Nwikinaka, whom they said was honest, committed and lover of development.
Special Assistant to the Rivers State Governor on Electronic Media, Simeon Nwakaudu said though the Press Unit of the Government House, Port Harcourt received the news of Nwikinaka’s death with shock, it was consoled by the fact that the life of the late information manager profited the society.
He said that the Late  Nwikinaka left a legacy of outstanding  contributions  to re-defining the management of Information at the highest level in the state.
Former member of the Rivers State House of Assembly, Mr Legborsi Nwidadah, described Nwikinaka as a man of integrity  whose actions were normally  aimed at developing the society.
He said Nwikinaka contributed to the sponsorship and grooming of several Kpean youths, including himself. He said that Kpean will miss their outstanding son.
Speaking on behalf of St Pius K. College, Bodo, Prof Joseph Vipene said that the Late Nwikinaka was an outstanding alumnus of the alma mater.
A representative of Salvation Ministries praised the commitment of the Late Pastor Nwikinaka to the gospel, while the daughter of the the deceased read his biography.
The Late Pastor Nwikinaka was also former General Manager of the Rivers State Newspaper Corporation and one time Chairman of Rivers State Council of the Nigerian Union of Journalists, NUJ.

Ogoni Clean-Up: Mitee Cautions On Use Of Soldiers