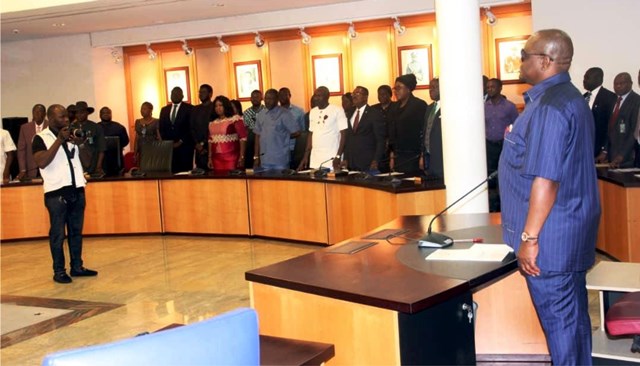 The Niger Delta Youths Coalition for Peace and Progress (NDYCPP) says the recent laurels and honorary citizenships awarded to Dr Ibe Kachikwu are well deserved.
President of NDYCPP, Mr Tiedor Olayinka said in Yenagoa, last Saturday that the global honours had vindicated the group.
It would be recalled that Kachikwu, was last Thursday, conferred with multiple honours, including honorary citizenship of the State of Georgia in the United States.
Kachikwu was also conferred with honorary doctorate degree by the Trinity International University of Ambassadors, and Keys to the State of South Carolina and City of Stonecrest, State of Georgia.
The event, which held at the Capitol Hill of the state in Atlanta, also featured the declaration of October 25 as ‘Emmanuel Kachikwu Day’ by the State of South Carolina.
Olayinka, in a reaction to the development, urged those behind the smear campaign against Kachikwu to leave him alone to concentrate on his achievements.
“These feats buttress our initial claim that the man is an exceptional fellow, a quintessential scholar, a doyen in his field.
“This is the calibre of person an infinitesimal few want to blackmail. A prophet is not recognized in his community. The rejected stone that is now a chief corner stone, a gold fish has no hiding place.
“They say when you chase after a chic you’re encouraging it to spread wings and fly. Kachikwu is the first minister who has won the heart of the youths, elders, the ex-militants alike.
“He is an upright man that command enormous respect from the people. We won’t have any body, no matter how highly placed you are to discredit, rubbish his hard earned reputation,” Olayinka said.
Olayinka noted that it was an irony that Kachikwu, a man respected and acknowledged worldwide targeted by mediocre to rundown out of envy and warned that Niger Delta youths would no longer tolerate further attack on him.
“Enough is enough. Gone are those days when they insinuated that Niger Delta people do not love themselves, or will sacrifice their own on the altar of stipends and personal gains.
“We are a people so conscious of ourselves and our contribution towards the peace, unity and economic growth of this Nation. If we were fools before, we are no more. We know who are behind this evil orchestration.
“But our silence should not be mistaken for cowardice. This evil act could snowball to something catastrophic. Let the detractors behind those smear campaigns repent while it is still day.
“Leave Kachikwu alone. We won’t sit and fold our arms while our very own suffer untold hardship in that hands of evil men at the corridors of power. A stitch in time saves nine,” Olayinka said.