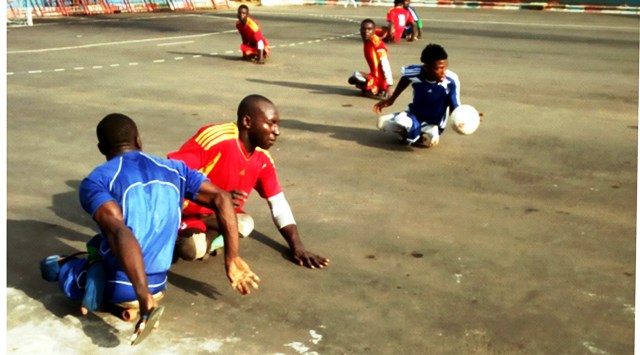 Rivers State Handball coach, Olunsanjo Ogundoro, has said that he did not loss to a better team, rather he lost to the two referees that officiated the match.
He said his chances to qualify to  represent the zone at the forthcoming 19th National Sports Festival (NSF) in Abuja, December is slim, but still have hope to qualify.
Team Rivers male handball team lost to Delta State 18 against 16, at the ongoing South South zonal elimination tournament holding in Asaba, Delta State.
Coach Ogundoro said this in an exclusive interview with Tidesports,  shortly after his side  loss to Delta State on Wednesday, at Stephen Keshi stadium, Asaba, Delta State.
According to him, the two referees that officiated the game were indigenes of Edo State.
“ I am not happy with what just happened here. I did not loss to a better team, but lost to the two referees that officiated the match.
“The two referees are indigenes of Edo State and every Nigerian is aware that Edo and Delta States are sisters. In fact, they are like children born by same father, but different mothers.
“Our chances to qualify is slim, but we will try to win our remaining two games,” Ogundoro said.
Speaking, the head coach handball, Delta Sports Commission, Henry Obi, expressed confidence that Delta State will represent the zone in handball.
He noted that Rivers handball team is one of the best teams in the zone, but now that he has defeated them he is sure to win the tournament.
Coach Obi, equally said that he will not underrate any team, as no team is a push over.