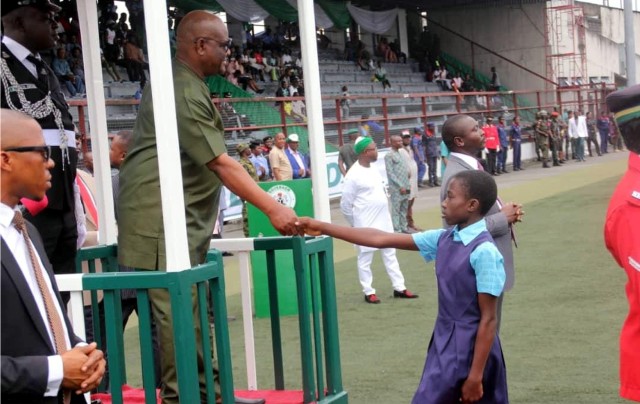 The new Provost, Federal College of Education, (FCE) Eha-Amufu in Enugu State, Mrs Pauline Ikwuegbu says she will do her best to build on legacies of her predecessors
Ikwuegbu, the first female provost of the college made the pledge last Saturday at the inaugural ceremony to officially welcome her to the college after her appointment on June 22, 2018.
She said with the cooperation of staff and students, her administration would take the college to enviable heights through academic excellence.
“I will build on the legacies of my predecessors in FCE and with your cooperation together we will take the college to an enviable height.
“I want to assure you that all the challenges facing the college are surmountable with your support, I am equal to the task by the special grace of God,” she said.
The provost said some problems like lean internally generated revenue, shortfall in subvention from Federal Government as well as shortages in the Tertiary Education Trust Fund (TETFund) were threats to education advancement not only in the college.
“As a teacher with over 25 years of experience, with team work and unalloyed support, we will overcome these challenges and achieve all our set goals,” she said.
The provost said her administration would operate an open door policy and would be ready to welcome constructive criticism that would help move the college forward.
“Do feel free to come to me, as my administration will operate an open door policy as well as welcome constructive criticism that will help move the college forward,” she said.
In his remarks, the Registrar of the college, Mrs Ngozi Nnebedum, said the appointment of Ikwuegbu as provost was historic as she was the first female provost since 37 years the college was established.
“There is jubilation by the college community especially womenfolk who see her appointment as breaking the jinx of male provost monopoly in the college since the institution was established.’’
“I am assuring her that staff and students of the college will give her every necessary support to ensure that her administration achieved its set goals,.
“We are indeed grateful to the college governing council for recommending Ikwuegbu to the appropriate government authorities as the new provost of FEC,” she said.
In a remark, Mr John Nebo, the Chairman of the inauguration committee said the new provost appointment was unique as she was not only the first female provost but the first non-indigene of Enugu State to be appointed provost in the college.
“The positive impact of the new provost is already being felt with the recent approval of the college as a degree awarding institution,” he said.
The News Agency of Nigeria (NAN) reports that Ikwuegbu replaced Prof. Ben Mbah, whose tenure expired in March