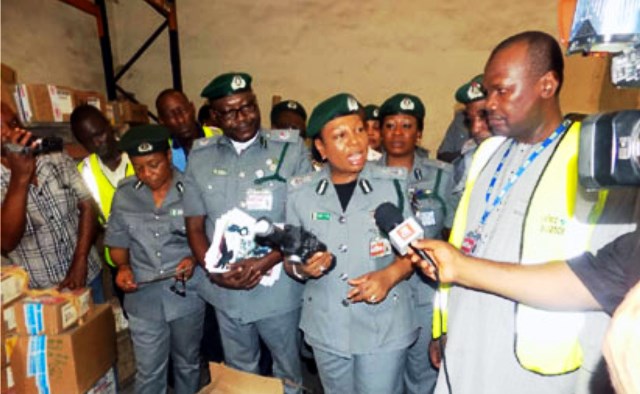 The Bayelsa State Government has solicited the partnership and services of the Nigeria Customs Service (NCS) toward ensuring the smooth take-off of the state owned international cargo airport.
The Director-General Bayelsa Investment Promotion Agency (BIPA), Miss Patience Ramami Abah made the appeal while conducting officers of the NCS on a facility tour of the airport last Wednesday in Amassoma, Southern Ijaw Local Government Area.
In a statement made available to The Tide in Port Harcourt, Abah described the services of NCS as critical in a cargo airport operations.
She also said, the state government was collaborating with NCS in the Agge Deep Seaport project.
We are forming the right partnership with key stakeholders to assist us in providing service to investors and business persons and among the key stakeholders in the NCS, we are commissioning our cargo airport very soon and we cannot operate cargo service without the involvement of NCS because there will be export and import services, so their role is very critical to making sure that these operations run smoothly”, she said.
According to Abah, “We also have the Agge Seaport project that we are working on as well and we intend to set up a terminal for movement of critical goods and services and again the NCS will play a critical role in making sure that those services are in a way it is supposed to be”.
Earlier, the Controller of Rivers and Bayelsa Command, Nigeria Customs Service said the role of the custom officers in an airport was critical, especially in area of revenue generation.
Represented by Assistant Superintendent, Dyako Tyavkase, assured the state government of the readiness of NCS to partner with them when the airport begins operations.

A chieftain of the Association of Nigerian Licensed Customs Agents (ANLCA), Apapa chapter, Mr. Frank Aliakor, has decried the proliferation of bonded terminals in Lagos metropolis, saying it constitutes noise pollution within the residential areas.
The  seaports operator alleged that some of the off dock terminals were not duly licensed by the Federal Government, thus creating problems for shippers freight agents and occupants in residential areas.
He also queried the approval of some of the off dock terminal operators due to poor handling of equipment in their possession.
Speaking with The Tide recently, Mr. Aliakor noted that the proliferation of bonded terminals had worsened traffic situation in Lagos State and called on the government to regulate their activities.
Though the customs broker declined to mention names of some of the erring operators, he alleged that with the movement of imports to such facilities, cargoes were not properly examined due to lack of adequate manpower and relevant security personnel at the terminal to checkmate the activities of unscrupulous agents and shippers during physical examination.
Aliakor reiterated that activities at some of the off dock facilities were not properly monitored against the background of insecurity in the country, noting that the mother port still had space for examination before the final evacuation of cargoes.
He also disclosed that the seaport terminals are empty as a fall out of the atrocities of some scrupulous importers,  pointing out that due to the thriving illegalities at the bonded terminals, most of the shippers take the advantage to move their consignments to such facilities.
Aliakor who is a critical stakeholder at the Apapa seaport lamented that activities of the freight stations also heightened gridlock along major highways linking various communities in Lagos State thus constituting nuisance and pollution for residents.
“The issue of proliferation of bonded terminals is alarming because everybody wants to own a terminal outside the seaports and this calls for concerns.
“All these terminals are constituting nuisance within the community in Lagos and I will suggest for government to review the establishment of some of these terminals”, he said.

The Nigerian Maritime Administration and Safety Agency (NIMASA) and the Nigerian Customs Service have agreed on modalities for seamless and timely delivery of the Deep Blue Project assets currently at the ports.
The agreement was reached in a meeting between the Director-General of NIMASA, Dr. Bashir Jamoh, and Comptroller General of NCS, Col. Hameed Ali (rtd.), in Abuja, last Thursday.
According to Jamoh, “because of the peculiarities of the urgent need of these assets, there is a need to find a common ground that would assist in the full deployment of these assets”.
While appreciating the customs boss for the efforts in clearing the Deep Blue Project assets still at the ports, Dr. Jamoh urged the customs to share information and capacity with NIMASA to ensure successful implementation of the Deep Blue Project.
The NIMASA DG also raised the issue of the Modular Floating Dock, which he described as a public asset to be managed by the Infrastructure Concession Regulatory Commission (ICRC).
A statement signed by the Assistant Director, Public Relations, NIMASA, Osagie Edward, quoted Jamoh as saying that, “The Infrastructure Concession Regulatory Commission (ICRC) is fully involved in the process to select a management partner for the Modular Floating Dockyard.
“We urge the Nigerian Customs to see and treat the asset as a national asset that should enjoy some concession in terms of duties”.
“When it becomes operational, hundreds of direct jobs will be created and thousands of indirect employment will also be created”.
Meanwhile, the Managing Director of the Nigerian Ports Authority (NPA), Mohammed Bello-Koko, has approved the appointment of three new port managers.
This is in a bid to engender operational efficiency and make NPA the maritime hub of Africa.
The new appointees are Yitnoe Stanley Magaji, former Technical Assistant Managing Director, Marine and Operations, now as Port Manager, Onne; Buba Jibril, former Traffic Manager, LPC appointed as the Port Manager, Tin Can Island Port, and Ovbude Nelson Uwaifo, former Traffic Manager, Dangote Jetty, now as  Port Manager, Calabar.
The erstwhile Port Manager, Tincan Island Port , Engr. Yunusi Ibrahim Anji, moves to corporate headquarters as Assistant General Manager, Port Engineering, while Dantsoho M Abubakar, former Port Manager, Onne now becomes Technical Assistant Managing Director, Special Duties.
Leoso Akintunde Oladipo, Principal Manager Traffic LPC, assumes duty as Traffic Manager, Lagos Port Complex, while Aliyu Abubakar, Principal Manager, Traffic Kirikiri Lighter Terminal, takes over as Traffic Manager, Dangote Jetty, Lekki.
The appointments, according to a statement by the NPA, take immediate effect.

A renowned marine expert in Rivers State, Comrade Kins Dimkpa, has blamed the recent collapse of Isaka Jetty on lack of maintenance culture.
The marine safety officer who decried the unfortunate incident that claimed one life, said jetties all over the world required regular maintenance to avoid carnage.
Dimkpa stated this in Port Harcourt during an interview with The Tide.
He decried overcrowding of jetties by passengers, saying jetties are not built to accommodate crowds, but as walkways for passengers to board boats.
Describing the Isaka Jetty as an old structure, Dimkpa called on the state government and other relevant authorities to embark on maintenance of jetties every five years to avoid collapse.
As a panacea to reduce over-crowding around the jetty, he advised the government and local authorities to set up a task force to control crowd and movements around the jetty.
While advising passengers to avoid over-crowding and keep away from heavy objects, Dimkpa urged that marine divers should be stationed in every jetty for rescue mission.
The safety officer also cautioned the end users against defecating on top of the jetty, saying such act wears up the jetty and causes collapse.
He advised passengers embarking on a water journey to wear life jackets to curb boat mishap
He appealed to security agents to ensure safety of lives at the jetty by controlling crowds as well as arresting those embarking on night travelling.