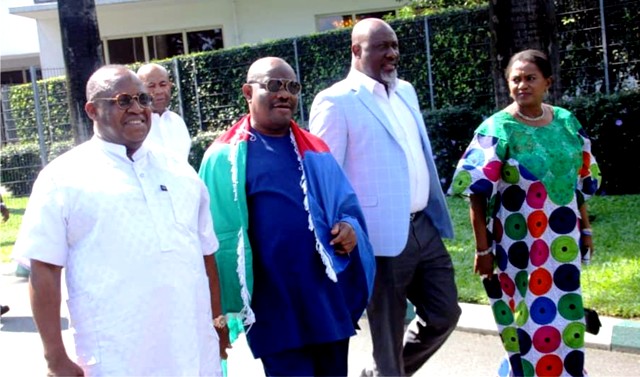 The police in Rivers State say they have arrested the General Overseer of Mount Sinai Ministry located at Rumukpokwu, Pastor Gloria Raphael and 16 others for child stealing and trafficking.
The state Commissioner of Police, Zaki Ahmed, who disclosed this during a press briefing at the command headquarters in Port Harcourt, last Saturday, to showcase some achievements recorded by the command, recently.
Zaki told newsmen that men of the State Criminal Intelligence and Investigation Department (CIID), in a sting operation at the early hours of last Friday, stormed the premises of one Gloria Raphael, whom he said was into the business of child trafficking and sale, where 16 pregnant women awaiting delivery and onward sale of the children to waiting buyers, were arrested.
The state CP disclosed that the arrested pregnant ladies include, Esther Joseph, Maureen Martins, ThankGod Garrick, Isabu Joy, Progress Ndubuisi, Mary Robinson, Chiamaka Okeze, Amarachi Isaac, Eberechi Brown.
Others are Favour Gabriel, Adaeze Chinaka, Gift Ufomba, Sandra Solomon, Esther Mathias and Chinyere Nweke.
According to him, one of the pregnant women had an emergency labour shortly after they were arrested, and later was delivered of the baby successfully at the police clinic where she was rushed to.
He averred that the police command had reached out to the Bishop of OPM, Apostle Chibuzor Chinyere, who had agreed to rehabilitate and take care of all the pregnant women.
Similarly, the CP said, “Men of the Anti-Kidnapping Unit (AKU), acting on credible information, stormed a criminal hideout at Ukpeliede community in Ahoada where Justice Chidimgba, Bobo Wire, and Ngozi Yellow were arrested, and on interrogation, confessed to be responsible for the kidnap of one Moses Walter, a retired warrant officer of the Nigerian Army who was kidnapped on July 3, 2018, killed and buried in shallow grave”.
Zaki also told journalists that Special Anti-Kidnapping Squad, acting on actionable intelligence, arrested two suspects: Blissful Ezekiel and Chimezie Okeke, who stole telecommunication equipment, adding that their confession led to the recovery of 32 solar panels, and 30 MTN batteries valued at N30million.
He assured adequate mobilization of police men during the independence anniversary in the state.