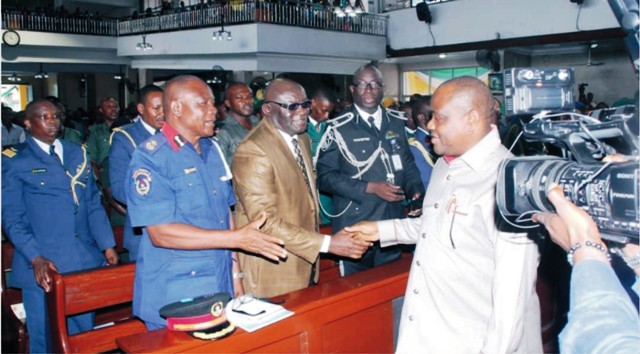 The Speaker of the House of Representatives, Hon Yakubu Dogara, yesterday, noted with dismay that many Nigerians have lost hope in the country, and wondered if they could continue to depend on Nigeria for their happiness and lifetime goals.
He also called on citizens to monitor elected leaders to ensure that the true tenets of democracy are preserved and practised.
Dogara, who said this in a message marking Nigeria’s 58 Independence Anniversary, urged the citizens not to give up hope and faith in the progress of the country, adding that they will soon begin to experience the true benefits of democracy.
In his words, “The failure of governments over the years to provide good governance that will translate into wealth and prosperity for the citizens, many citizens have lost hope in the country and now wonder if they can continue to depend on it for their happiness and lifetime goals.
“Through the effective functioning of the three tiers of government, a Nigeria that sees all citizens as equal and seeks to ensure that the rights to life, liberty and the pursuit of happiness, will surely emerge.
“But all these can only be achieved through vigilant monitoring of elected leaders to ensure that the true tenets of democracy are preserved and practiced.
“For some of our citizens who wonder whether they are in the position to invest their liberty in the pursuit of happiness, I want to say they shouldn’t despair, as there is hope for the living.
“That fully in the course of history, the rich and powerful have always interchanged places with the poor and vulnerable. So, there is hope, and every reason for all Nigerians to celebrate this democracy”.
Dogara added, “As a matter of fact, in order for us to secure these rights, the framers of our constitution allocated governmental powers among three equal branches of government, the Executive, the Legislature and the Judiciary. The three greatly working together makes it extremely necessary for compromise and consensus in governance.
“Whenever you see a democracy that is working; check it very well, it is consensus and compromise that drives it. Of course this democracy that we all cherish is very fragile, and as such we can’t take it for granted.”
He also called for more active participation of citizens in governance, saying that any generation that relaxes on vigilance would awaken to the rude shock that the courts and other democratic institutions have been weaponised against them.
“And as much they have become subjects, instead of citizens, where obeisance to the government is demanded as against the government fearing the people.
On this premise, the Speaker cautioned, “That must not be the case with our own democracy, and for us to ensure that our democracy survives, we have to be eternally vigilant,”
“Be it in the South, West, North and East, across all divides to unite for the common good for the pursuit of our future and the advancement of our people”, adding that he believes that nothing was impossible in a united, peaceful and democratic Nigeria.

Nigeria Has Been Crawling, Buhari Admits