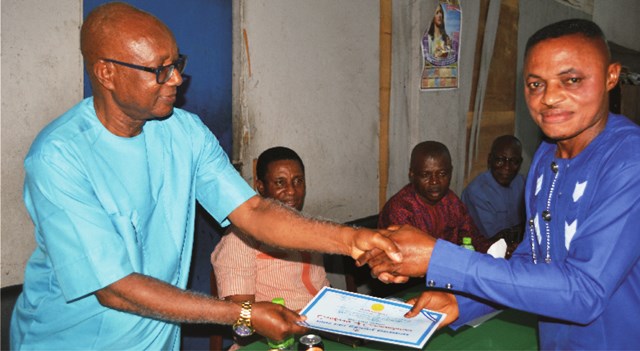 Some youths of Grand Bonny Kingdom in Bonny Local Government Area of Rivers State are at loggerhead with the leadership of the Jumbo Major House over activities likely to stall the ongoing Bodo-Bonny Road project.
The youths, who spoke under the aegis of the Bonny Youth Federation at a media briefing in Port Harcourt, said that their attention has been drawn to some baseless comments and allegations by one Jasper Jumbo, who parades himself as the traditional head of Jumbo Chieftaincy House, indicating that the Jumbo House was being sidelined from the benefits emanating from the project and hence his determination to stall the project.
The text for the briefing, which was read by Bonny Kingdom Youth Leader, Barrister Simeon Wilcox, also accused Chief Jasper Jumbo of alleged attempt to grab all the benefits accruing from the project to himself.
According to them, the Jumbo Major House was adequately represented in a committee set up by the leadership of Bonny Kingdom for the project.
“The Jumbo House is just one out of the several impacted communities. And the interest of the Jumbo House and several impacted houses/communities are fully taken into consideration on matters pertaining this laudable project that is beneficial to us all”, he said.
However, when contacted, Chief Jasper Jumbo said that he would not want to accord relevance to those he described as “Meddlesome and unqualified upstarts who are paid to come as hatchet propagandists”.
He, however, referred the reporter to the youth president of Jumbo Major House, Mr. Dagogo Jumbo, who described the allegations by the Bonny Youth Federation as baseless.
Dagogo, who gave the reporter several court judgments and other documents to buttress his points, said that Chief Jasper Jumbo, installed since 1995, was the traditional head of the Jumbo Major House, stressing that in Bonny Kingdom, it was the house that selects and presents its chiefs to the Bonny Chiefs’ Council.