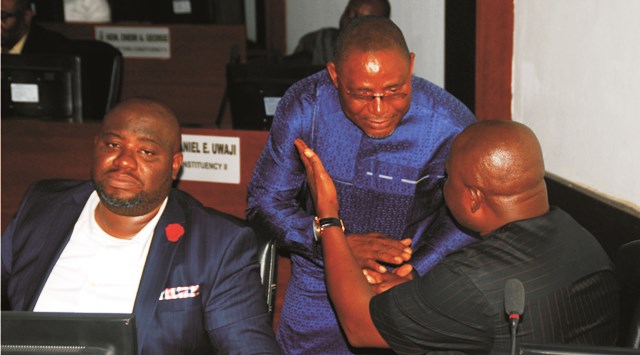 Stemming from the controversy generated by its choice of Port Harcourt, as venue for its national convention, the Peoples Democratic Party, PDP, has said it opted for the Rivers State capital, ahead of other places, because it met all the requirements to host over 4,000 delegates.
According to the party, it set up a committee to locate a good venue for the convention, explaining that this became necessary since the “APC had fixed its own primary and convention for same date at Eagle Square.”
The committee, headed by Ambassador Ibrahim Kazaure, came out to make the clarification in the light of protests by some of PDP’s presidential aspirants, who are insisting that the Port Harcourt venue was chosen to confer undue advantage on one of the contestants for the presidential ticket of the party..
The party’s Board of Trustees, BoT, had, on Thursday, resolved to change the venue of the October 5 and 6 presidential primary to Abuja, in what observers saw as a response to the protests.
The decision is, however, subject to approval by the National Working Committee, NWC, of the party.
Explaining why the Port Harcourt venue should stand, the party made it clear that the Kazaure Committee went round to look for a convenient venue, taking into account hotels, flights and other logistics arrangements.
For instance, while the stadium in Uyo, the Akwa Ibom State capital, was discovered to have been prestigious enough to host the event, the discount of accommodation robbed the state of the hosting rights.
“If all hotels were to be empty, they will only be able to cater for 2,000 persons. And the delegates are over 4,000. The committee went to Enugu and discovered that a likely venue there has no fencing, which makes it vulnerable since the exercise will run into the night”, the party said.
“The facility in Asaba, Delta State, also cannot withstand the number of persons. Hence the committee settled for Port Harcourt, which met all criteria.”
Apart from the logistics advantages that Port Harcourt provides, the party further stated that Rivers, being a state under its control, is also appropriate “in the event the ruling APC tries to frustrate the presidential primary”.
It added: “Port Harcourt has held similar convention and has enough facilities to withstand vehicular and transport requirements. “Flights to Enugu are minimal, flights to Uyo are also minimal. Asaba Airport is undergoing renovation and can only land smaller aircraft. Port Harcourt has a higher number of flights. These are some of the considerations.”
Last week, Rivers State Governor Nyesom Wike had justified the selection of his state as congress venue, stating that it has all the hotels and sundry facilities and had enjoyed a flawless hosting of such event in the past.
Curiously, all the presidential aspirants were part of the decision that Port Harcourt should host the convention.