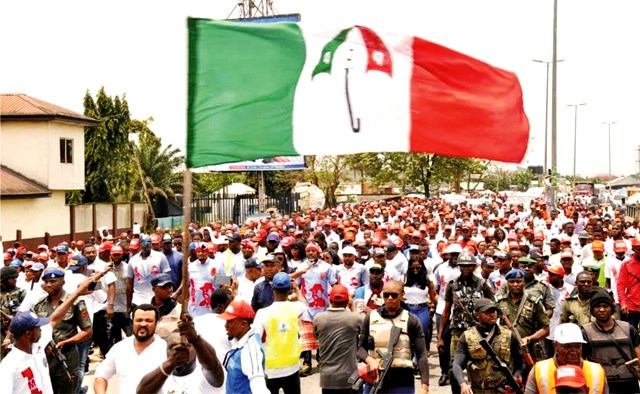 Senator Danjuma Laah’s bid for a second term received a massive boost yesterday with Professors from his Kaduna South Constituency endorsing him for a fresh tenure.
The professors’ endorsement was contained in a statement signed by Prof. John Gambo, Chairman, Forum of Southern Kaduna Professors (FOSKAP), and made available to The Tide source, in Jos.
Gambo, Dean, School of Post-Graduate Studies, Kaduna State University, in the statement, regretted that the senatorial zone had never returned a senator, and urged the voters to break that jinx.
The professors, who premised their stance on Laah’s “credible performance in the senate”, expressed concern that the PDP state executive council were reportedly backing Rep. Adam Jagaba, who recently defected from the APC, to succeed him.
They alleged that facts were being distorted to achieve the “infamous feat” of not returning a senator, and wondered why Laah was being sacrificed to “please some forces”.
The statement said that Laah had shown an “uncommon courage” by standing up for his people when many communities came under attack by invaders that killed many people.
“Incidentally, people seeking to displace Laah disappeared into thin air during those dark moments. They did not have the courage to stand up for the people. Only Laah took the risk to do that,” it said.
It expressed surprise that people spearheading the struggle against Laah were being led by a member of the House of Representatives seeking a third term.
“The member wants a third tenure because he argues that he can do more as a ranking member, but does not want the area to have a ranking senator. This is puzzling,” it said.
The professors expressed shock that Laah was being accused of concentrating projects – a Police boarding school, primary school, National Open University of Nigeria (NOUN) and the Federal University of Technology, – in two local governments.
“It is at least gratifying to note that Laah has projects; so far, no one has told us the projects initiated by Jagaba in his 12 years in the House of Representatives for which he should be rewarded with the senate seat.
“Professors and other Southern Kaduna Academics will be glad to know the achievements of Jagaba in the years he has spent there. We want to be enlightened.”
They, however, said that they were not against anyone seeking a higher elective office.
“We are only insisting that Laah has performed and is still performing creditably well to deserve a second shot at the senate.
“Aside the state government, Laah is the major employer of labour in the zone and has amply demonstrated that he has the interest of Southern Kaduna people at heart,” they argued.
The professors cautioned PDP delegates against “subverting the will of the people” during the primary elections, and urged voters to “stand firm against the agents of darkness”.
They wondered why critics would concern themselves with the location of a federal university in an area where youths travel to Lagos, Zaria, Sokoto and Maiduguri in search of university education.
“When the university is established, people from all directions will benefit in the areas of admission, employment and other multiplier effects.
“The boarding school is over 60 per cent completed. A Commandant and Deputy Commandant have been appointed and classes will soon start. Everybody will benefit from the project,” it said.
The professors revealed that Laah had built a secondary school and a hospital with staff quarters in his village which he donated to the state government, long before he became a senator.
“It is in Sen. Laah to strive for the betterment of his people. A bird does not change its feathers because the weather is hot,” the professors said.