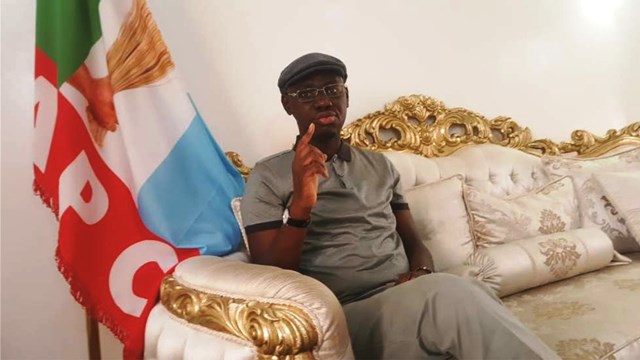 The immediate past Deputy National Publicity Secretary of the All Progressives Congress (APC), Comrade Timi Frank, has called for immediate sack of the Inspector General of Police, Ibrahim Kpotum Idris, over Tuesday’s illegal invasion and search of the House of elder statesman and Ijaw leader, Chief Edwin Clark by the police.
Frank said the current police boss has shown lack of capacity, disrespect for the Constitution and flagrant disregard to the rule of law in handling the affairs of the security agency, adding that “Nigerians are tired of a trial and error Inspector General of Police.”
It would be recalled that some police officers had, last Tuesday, stormed the Asokoro residence of Clark in Abuja to allegedly “search for weapons” but the Police spokesman, DCP Jimoh Moshood, in a statement had apologised and denied knowledge of the incident.
But reacting to the development in a statement, in Abuja, Frank, said despite the apology, the current IG has shown that he is not fully in-charge of the Nigeria Police.
While condemning the illegal siege on Clark’s residence, the former APC chieftain recalled the recent siege on the National Assembly which led to the sack of the erstwhile DG of the Department of State Services (DSS), Lawal Daura.
Frank said he believes that the current IG has not only shown himself as incompetent but a security apprentice who lacks knowledge of all that is happening in the force under his command.
“This latest siege on the premises of Pa Clark must be thoroughly investigated and culprits made to face the law, or we will be at liberty to conclude that a plot to finally eliminate Chief Clark is at a full blown stage as anything short of the IG’s sack will be seen as a nod by his paymasters to carry on with his nefarious acts.
“The activities of the Nigeria Police in recent times have left everyone wondering if indeed this is the same police saddled with the responsibility to ‘Serving and Protect’ all Nigerian citizens.
“The modus operandi of this administration in clamping down and arm-twisting perceived opposition figures in the country has become one too many as Nigerians are now feel perpetually under siege.
“To buttress this assertion, the Vice President, Prof. Yemi Osinbajo, only recently ordered a review the activities of the FSARS – an arm of the police – that had become a living nightmare for law abiding citizens.
“Furthermore, this unwarranted police assault on Chief Clark is an attack on the Ijaw nation, aimed at stereotyping, embarrassing and nationally shaming the Ijaw people.
“The disdain and bad blood exhibited by this administration towards other minority tribes in the country is the worst since independence, and all well-meaning Nigerians must rise to condemn and resist it.”
The Bayelsa-born politician, however, called out all Ijaw sons and daughters to protect their PVCs and vote out “this malicious and self-serving government during the forthcoming presidential elections.
“Any Ijaw man or woman who supports this administration is indeed an enemy of the Ijaw nation and must be viewed as such. This attack is one too many to ignore as a mere coincidence. All other minority tribes that feel marginalized are free to make their choice.
“The hounding and hoodwinking of the Acting DG of the DSS, Matthew Seiyefa – an Ijaw man – speaks volume of the level of hatred and disdain with which the present administration holds the Ijaw people and other minority tribes in the country,” he declared.
Meanwhile, the Inspector-General of Police, Mr Ibrahim Idris, has approved the dismissal of three of the four policemen who carried out the illegal search in Chief Edwin Clark’s residence in Abuja, last Tuesday.
It would be recalled that the four policemen, has September 4, illegally carried out search in the Abuja residence of the Ijaw leader and former Federal Commissioner for Information, Senator Edwin Clark.
The officers are: AP/No.18858, Insp. Godwin Musa, AP/No. 225812 Insp. Sada Abubakar and AP/No. 225828 Insp. Yabo Paul.
A statement by the force spokesman, acting DCP Jimoh Moshood, yesterday in Abuja, said that AP/No. 158460 ASP David Domnic was placed on interdiction, pending the decision of the Police Service Commission (PSC).
Moshood said that Dominic was queried and was being investigated for discreditable conduct, negligence of duty and an act unbecoming of a police officer.
He said that the offences against the officer were serious and dismissal from service was inevitable.
The spokesman said that the dismissal of Paul, Abubakar and Musa was upheld after they were tried under Oath in Orderly Room for discreditable conduct.
Moshood said the dismissed officers were also tried for Illegal duty, disobedience to Lawful Order and other misconduct, contrary to the rule of law.
He said that the suspect/Informant, Ismail Yakubu, had been charged to the Upper Area Court Mpape, Abuja, for giving false information and telling falsehood that misled police action.
It would be recalled that the police high command has also apologised to Clark over the unauthorised search of his residence by the four policemen.