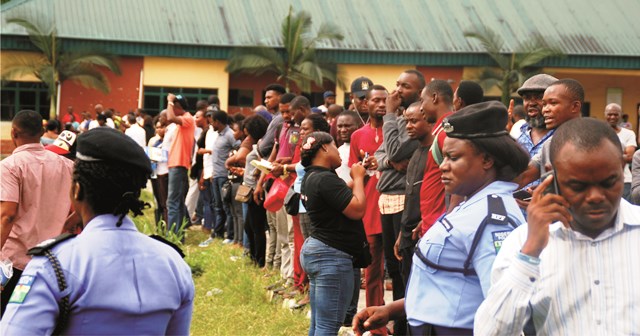 A group, Community Outreach Advocacy, Capacity Building and Health (COACH), has alleged that residents of Patigi pay N100 to register for their Permanent Voter Cards (PVC).
Founder of the group, Aisha Ahman-Pategi, said this on Monday in an interview with journalists in Patigi.
She alleged that potential voters paid the money to enable those in charge buy fuel to power generator for machines to register them.
She decried the inability of many residents of Patigi, Patigi Local Government Area of Kwara, to register for their PVC in the ongoing Continuous Voter Registration,  being conducted by the Independent National Electoral Commission (INEC).
Ahman-Pategi regretted a situation where people in the community were made to pay certain fees before they could perform their civic responsibilities, a practice she said was alien in other areas.
The founder of the community outreach group stated that she had met with relevant stakeholders on the need to address the anomaly, to avoid people being disenfranchised.
She also faulted claims that Kwara North Senatorial District had low population, saying that the population of Patigi alone was more than 500,000.
She said; “The reason why we came up with this was when I came back from outside the country to register for my PVC.
“When I got here, what I saw really baffled me. Actually, it was quite disturbing, because the INEC office was not what I expected.
“People were lined up and they were paying N100 to register. Apparently, they have to pay N100 for diesel. That is disturbing.
“By the time I started asking the youth, everybody was saying we are going with President Muhammadu Buhari. They said they have tried, that there are a lot of issues going on.
“And I could see it, there is so much anger, and I said this is not right. Everybody in Nigeria has a right, just the way it is in Abuja where you don’t have to pay N100; it should be the same way in every community in Nigeria.
“So, when I went back to Abuja, I spoke to a few of our leaders in APC.
“I said this is what is going on, this is what I found, and obviously this is the time for me to come back home and see how I can impact, especially if I’m going to start, I need to start with my community, because for a long time, we haven’t been here.
“One of the arguments is that people from Kwara North are not that many. So, they are not making that much impact even when it comes to election. I said that is not true,” Ahman-Pategi said.
Contacted, the INEC spokesman in Kwara, Jacob Ayanda, debunked the allegation. “What I am aware of is that we asked our staff to bring machines they are using, so we can download the data.
“What is N100?, for what? What can N100 buy?, how many litres of fuel will N100 buy?,” Ayanda said.