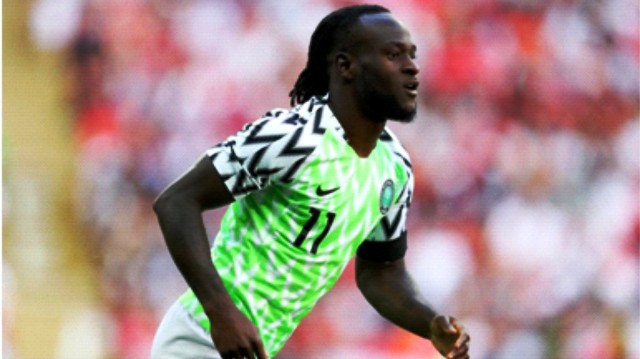 Former Super Eagles coach and captain, Christian Chukwu, yesterday said that the retirement of Nigerian born Chelsea player, Victor Moses, from international football was a matter of decision and not age.
Chukwu told newsmen that Moses knew about his body faculty more than any person.
He said that the decision should be read from the player’s personal opinion and not from the age.
“Victor Moses is a very vibrant and young player, so he has the right to take decisions for himself.
“He knows his body more than any person, therefore, it is best known for him why he retired and we wish him well,” Chukwu said.
Tidesports source gathered that the Chelsea of England player announced a surprise international retirement.
He did this in a series of twitter posts and pictures citing his club career development and family as part of his reasons for the decision.
The former Stoke City, Westham and Liverpool player, thanked Super Eagles coach, Gernot Rohr, the coaching staff, Nigerians and indeed the NFF for their support and opportunity given him while playing for the national team.
Moses, 27, scored 12 goals in 37 appearances for the Super Eagles.
Moses was instrumental in Super Eagles conquering of Africa in 2013 and represented the country in two World Cups, 2014 and 2018.
No reactions have come out from NFF over this development.
However, his Chelsea teammate, Eden Hazard, has wished him well in his future endeavours.
Hazard twitted: “Congratulations! You made your country proud”.
Also head coach of Rivers United Football Academy, Sunny Iseokwehima says he was surprise when he got the information that Nigeria Super Eagles Player Victor Moses has retired from international football.
He said that Moses retiring from the national team is a personal decision adding that it is not by age.
Iseokwuhma stated this in a telephone interview with Tidesports yesterday after the information from Victor Moses was announced that he has quitted the national team.
He explained that Moses retirement from national team at the age of 27 was too early adding that Moses’ decision was personal.
“Moses decision is a personal decision not age matter” he said.
According to him, it was time Moses should carry the Eagles team to a greater height saying that nobody knows why he decided to quit so early.
“Moses was one of the best players Nigeria took to the last World Cup in Russia 2018”, he noted.
Moses made his appearance for Nigeria in February 29, 2012, in a qualifier match for the African Cup 2013 against Rwanda.
He made 37 appearances, scored 13 goals assists six and won one African Cup of Nation during his time with the team.
The head coach explained that at 27, he is still very young to retire from the national team, adding that, Moses has always given excuses during friendly matches.