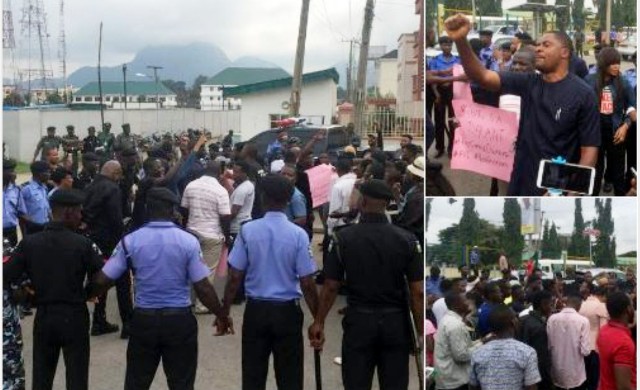 The meeting between Senators and members of the House of Representatives over budget for Independent National Electoral Commission, INEC, yesterday, ended in a deadlock. INEC is seeking budgetary approval of N189 billion to conduct 2019 general elections.
The meeting came to a stalemate as the lawmakers could not agree on the figures presented to both chambers of the National Assembly by President Muhammadu Buhari and that of INEC chairman, Professor Mahmood Yakubu.
Against this backdrop, the lawmakers have summoned the INEC boss to appear before the joint committe of the Senate and House of Representatives today to throw light on the grey areas that had been discovered in the budget proposal. While Buhari requested N143 billion for the commission, Yakubu’s was N189 billion.
According to the chairman of the Senate Committee on INEC, Senator Suleiman Nazif (Bauchi North), the joint committee will make its position known in a statement at the end of today’s meeting.
Addressing journalists, yesterday, in Abuja after the meeting, which started 3.30 pm and ended 4.30 pm, Nazif assured Nigerians that as lawmakers, they would ensure that INEC conduct credible, free and fair elections in 2019.
He said: “As we are all aware, Wednesday, we invited the chairman of INEC, who was in the National Assembly to address the House of Representatives as well as the Senate. And today (yesterday), our duty and responsibility was to try to harmonise what transpired between both houses and ensure that we cross the t’s and dot the i’s.
“The whole meeting was called consequent upon the letter of Mr President requesting supplementary and virement for the general elections of 2019.
“We have done what we needed to have done. And we have realised that there are a little bit of differences.
In view of that, it is the opinion of members of this joint committee that we invite the chairman of INEC for further clarifications tomorrow (today) at11am.
“From there, this committee will make a press statement and we will inform Nigerians of our position. I want to use this opportunity to assure Nigerians that this joint committee is committed to ensuring credible, free and fair elections for 2019.”
But the disparity led to a stalemate when the committees at a joint sitting wanted to approve the budget estimates, as some of the members argued that approval should be solely based on request by the President, while others argued for N189 billion approval INEC sought. Consequently, they resolved to summon the INEC boss for more clarifications on N189 billion budget proposal.

The Rivers State Governor, Chief Nyesom Wike, has assented to two bills passed into law by the state House of Assembly to enhance access to quality healthcare and enable government fulfil contractual obligations.
The bills signed into law by the governor include, Public Procurement (Amendment) Law No.1 of 2021 and Contributory Health Protection Programme Law No.3 of 2020.
Wike, who signed the bills into law at the Government House, Port Harcourt, last Monday, said with the signing of the Contributory Health Protection Programme bill into law, residents and people of the state who want health insurance can now participate in the scheme.
“Let me on behalf of the Executive Council sincerely thank the Speaker and members of the state House of Assembly for passing into law Public Procurement (Amendment) Law and Contributory Health Protection Programme Law, particularly the second one that has to do with health.
“This is something that has become a reality, today. We have had a lot of pressure from people and also Nigeria Medical Association so as to give health insurance to those who would want to participate. It is not compulsory for those who want to leverage of it in order to promote their health system.”
The governor urged civil servants in the state to leverage on Contributory Health Protection Programme to boost their health status.
Wike further explained that the Public Procurement (Amendment) Law, will enable the state government fulfill its contractual obligations.
He attributed the reason why contractors often ask for contract variation to low percentage of the project sum they receive from government.
According to him, this also results in delays fulfilment of contractual obligations.
“Government ought to a lot pay penalty, because under the law, if a contractor is not paid as at when due, there ought to be sanction against the government.”
The governor said the need for the state government to expedite and fulfill its contractual obligations, necessitated the amendment of the Public Procurement Law.
The Speaker of the Rivers State House of Assembly, Rt. Hon. Ikuinyi-Owaji Ibani, said the two bills signed into law by Wike are critical elements in developing society.
He stated that with the signing of the Contributory Health Protection Programme Law, it is now incumbent on the Ministry of Health and health providers to engage in intense campaign so that residents of the state could avail themselves of the immense benefits of the scheme.
The speaker noted that the huge investment made by Wike in both primary and tertiary healthcare is geared at providing universal health coverage for the entire population.
Speaking on the Public Procurement Law, the speaker said the Assembly saw the lapses in the last law, and decided to amend it, given that the exigencies of today is different from the exigencies of yester years.
Earlier, the Majority Leader of the House, Hon. Martins C. Amaewhule, informed that the state lawmakers, essentially amended Section 32 of the Procurement Law, which actually provided for about 30 per cent mobilisation to contractors to enable government fulfil contractual obligations.
He explained that it had become necessary to amend that section of the principal law to provide enable the Rivers State Executive Council to make provision for over 30 per cent of the contract sum to contractors whenever the need arises.

A Magistrate Court sitting in Port Harcourt has convicted one Goodnews Thompson and Kperebong Emmason to 24 years’ imprisonment with hard labour for stealing and trafficking two years and four months’ old Etim Gospel George.
The court sentenced the two on three-count charges bothering on child stealing, conspiracy and trafficking of Etim Gospel George on October 18, 2018, at Kom-Kom village in Oyigbo Local Government Area, Rivers State.
He is yet to be seen till date.
Delivering her judgement, last Monday, Chief Magistrate Felicitas Amanze, found Goodnews Thompson, the 1st Defendant; and Sunday Jonah, 2nd Defendant who was deceased while in prison as well as Kperebong Emmason, 3rd Defendant, guilty for stealing and selling little Etim George at the sum of N350,000.00.
The court found them guilty under Section 39 of the Child Rights Act, for stealing an only son of one Mary Gospel George, a widow, who lost her husband sometime last year in a pipeline fire outbreak at Kom-Kom.
Amanze sentenced the convicts to seven years’ imprisonment on count 1, seven years on count 2, and 10 years on count 3, making a total of 24 years’ imprisonment with hard labour, which will run consecutively.
Speaking to newsmen, Counsel representing FIDA, Kemi Ogunaike commended the court for ensuring that justice was served in the matter.

The Economic Community of West African State (ECOWAS) Court of Justice has ruled against the Federal Government of Nigeria on the suspension of Twitter, saying that the app was a fundamental right.
The ECOWAS Court also ruled that the Federal Government cannot arrest or prosecute anybody for using Twitter.
It would be recalled that the Socio–Economic Rights and Accountability Project (SERAP), had last Sunday, released a statement that it had dragged President Muhammadu Buhari and the Federal Government to court for placing a ban on Twitter.
The Federal Government, in defence, told ECOWAS Court in a document made available to newsmen, that it suspended the service of Twitter Inc. in compliance with the relevant provisions of its domestic laws.
“The suspension was premised on reasons of national interest and national security of Nigeria.”
It also stated that the suspension of the operation of Twitter in Nigeria has nothing to do with the account of individual twitter users in Nigeria.
The Federal Government also challenged the capacity of the court to sit on the subject matter, stating that, “This Honourable court lacks the jurisdiction to determine the criminalisation of an act under Nigerian domestic laws.”