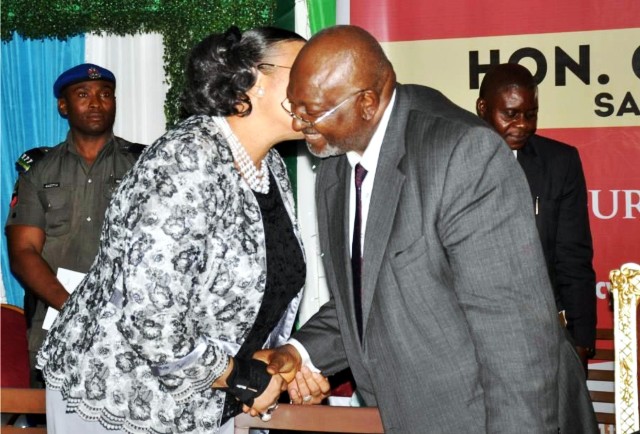 Broadcast Stations operating in the Cross River State have been enjoined to dwell more on local content in their daily reportage of news activities in the State in order to carry the citizenry along and attract more patronage.
The Cross River State Commissioner for Information and Orientation, Mrs. Rosemary Archibong stated this while receiving in audience the new General Manager of Federal Radio Corporation of Nigeria (FRCN), Canaan City 99.5 FM Calabar, Mr. Sam Bassey and his Management team who paid her a courtesy visit in her office in Calabar.
Mrs. Archibong lauded the Radio Station, which she pointed out, had made a huge mark in uniting the people through its diverse programmes spread across several cultural backgrounds in the State, emphasizing that carrying more of local news would help in endearing the Station more to the people.
The Information and Orientation Commissioner assured the Station of the commitment of the Governor Ben Ayade-led administration in providing a conducive work environment for all media Practitioners operating in the State to carry out their legitimate duties, while urging them to strive to imbibe professional ethics in their day-to-day activities.
She told the General-Manager and his team that the efforts of Governor Ayade to industrialize Cross River State was yielding results, pointing out that the Rice Mill in Ogoja, the Ultra-modern Cocoa Processing Factory in Ikom, the Toothpick Factory in Ekori, the Banana Plantation in Odukpani, the Calabar Pharmaceutical Company, among other projects, were all at advanced stages of completion, while the Cross River Garment Factory and the Rice Seed and Seedlings Multiplication Factory in Calabar had both commenced operations with hundreds of Cross Riverians gainfully employed.
Mrs. Archibong charged the station to give wide publicity to the modest efforts of the present administration and assured them that their requests would be forwarded to Governor Ayade, who she noted, had a listening ear to attend to them in view of their importance.
The new General-Manager of FRCN, Canaan City 99.5 FM, Mr. Sam Bassey said he took the reins of the station over a month ago and found it necessary to familiarize himself with major players in information management in the State.
Mr. Bassey told the Commissioner that Canaan City FM had in the last four years of its existence in the State, developed several programmes aimed at providing a platform to adequately publicize the State, with emphasis on the policies and initiatives of the present administration and pledged to do more during his tenure.
He appealed to Governor Ben Ayade to support the Station in the area of studio equipment, transmitters, vehicles, furniture, fuelling, among other needs, which he maintained, would help keep the station regularly on air for the overall benefits of residents of the State.