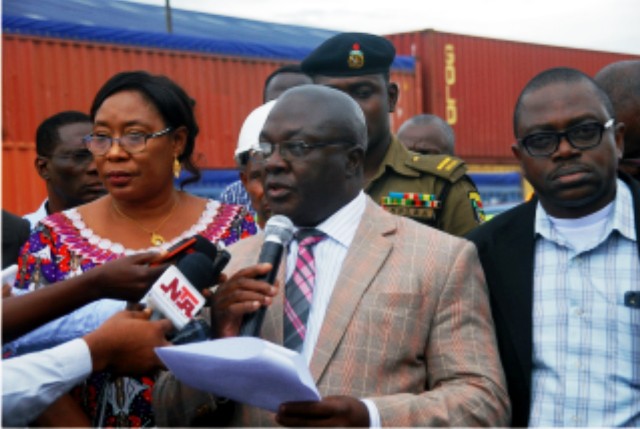 The Amanyanabo of Abonnema, King Disrael Gbobo Bob-Manuel has appealed for the establishment of a higher institution in the Kalabari area of the state.
King Bob-Manuel, who said this during the commissioning of the reconstructed Nyemoni Grammar School by Governor Nyesom Wike in Abonnema said the establishment of either a Polytechnic or School of Basic Studies in the Kalabari area would improve the educational conditions of the people.
The monarch commended Governor Wike for the several projects executed in Akuku-Toru Local Government Area which included, the Abonnema- Obonoma ring road, renovation of Abonnema General Hospital, the Abonnema- Obonnoma bridge, the appointment of sons and daughters of the area into positions of trust, amongst others.
He also regretted that despite the huge contribution of the area to the economy of the nation in terms of oil and gas, successive administrations at the national and state levels had neglected the area, by not siting meaningful projects.
King Bob-Manuel also decried the poor state of the Emohua-Tema-Abonnema road and urged for urgent action, saying it is the only access road linking the three Kalabari local government areas.
He also commended Governor Wike for paying up the state counterpart fund for the European Union Water project to make the people of the area have quality drinking water.
The monarch however, pleaded with the Governor to ensure the commencement of work on the Trans-Kalabari road project.
He also urged the Governor to investigate the circumstances leading to the failed sand dredging contract awarded by the Niger Delta Development Commission (NDDC) to the community 20 years ago.

Rivers State Deputy Governor, Dr Ipalibo Harry Banigo, says Rivers State is gradually achieving epidemic control of HIV/ AID.
Banigo stated this in a release from the Government House in Port Harcourt last Monday in commemoration of the year 2020 World AIDs Day celebration.
According to Banigo, Governor Wike who is the Epidemic Control Surge Champion for Rivers State had demonstrated great passion and commitment in the quest to mitigate the spread of the virus in the State, noting that he was the first Governor in the country to abolish user fees for People Living with HIV/AIDS.
Banigo further said “because of the Governor’s magnanimity our patients are doing very well and the issues of stigmatization of people living with HIV is reducing significantly”.
Dr. Banigo also said the strategy of community testing and identification of positive cases into the neighbouring treatment facilities which is described as Sexual Network Tracing (SNT), had yielded great dividends.
The Deputy Governor urged citizens to take responsibility to remain healthy, stressing that the State Government has the political will and commitment to ensure the Rivers People enjoy quality health care delivery that is comparable to the best in the world.
It would be recalled that the 1st of December each year has been set aside to celebrate World AID Day. The Theme for this year’s celebration is “Ending the HIV/ AIDS Epidemic: Resilience and Impact”.

…Felicitates With Akawor On Birthday

Rivers State Deputy Governor, Dr Ipalibo Harry Banigo, has felicitated with the State Chairman of the Peoples Democratic Party (PDP), Ambassador Desmond Akawor as he celebrated his Birthday yesterday.
In a statement from the Government House in Port Harcourt yesterday, Banigo described Ambassador Akawor as a humane and God fearing gentleman whose wealth of experience as an administrator and a diplomat would propel the PDP to greater heights in the State.
The Deputy Governor said Akawor’s tenure as Nigeria’s Envoy to South Korea between April 24th 2008 and 6th August 2015 witnessed a very robust bilateral relationship between Nigeria and South Korea, noting that as the Administrator of Greater Port Harcourt City Development Authority as well as the Director General of the Governor Wike’s Gubernatorial Campaign Organization, Ambassador Akawor discharged his duties meritoriously.
Banigo   wished him many happy returns and prayed the Almighty God to continue to bless, protect and keep him in good health.

The Independent Corrupt Practices and Other Related Offences Commission (ICPC) said it has traced the sum of $919,202.07 (approximately N450million) to bank accounts belonging to officials of the Federal High Court in Port Harcourt, Rivers State.
The ICPC Spokesperson, Azuka Ogugua, who disclosed this, last Monday, in Abuja, said that the commission acted on a petition instituted against some officials of the Federal High Court in Port Harcourt for alleged corrupt practices.
According to Ogugua, investigators in the Rivers State office of the commission traced the money that had been hidden in an interest-yielding account by the said officials since 2014.
She said that the commission has obtained an Interim Forfeiture Order on the sum hidden in a bank account.
Ogugua said: “On discovery of the hidden money, the ICPC through its lawyer, Dr. Agada Akogwu, filed an Ex-parte Motion for an Interim Order of Forfeiture of the money.
“In his ruling, Justice Mohammed Sani of the Federal High Court, Port Harcourt, granted the commission’s prayers for interim forfeiture of the said sum pending the final hearing on the matter”, Ogugua added.
The judge further ruled that the ‘’orders of the court directing the interim forfeiture shall be published in any daily newspaper within 14 working days for any person interested in the said property sought to be forfeited to appear before the court to show cause why the final forfeiture orders be not made in favour of the Federal Government of Nigeria.
“The matter was adjourned to December 14, 2020, for reports and final forfeiture hearing”, the statement said.